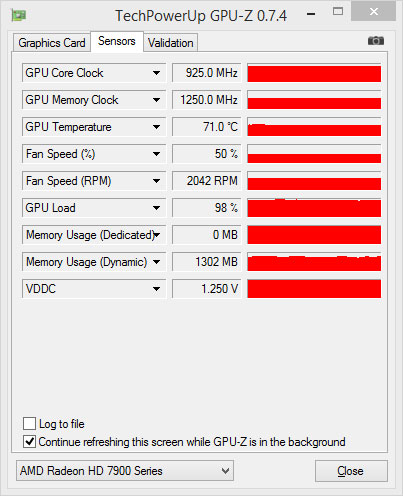 The temperature readings show the R7950 heats up the same amount as the previous generation HD7870, however the overall temperature is much higher by 19C, this is a huge temperature change.

For testing power consumption, a P3 Kill-A-Watt power meter was used. To achieve idle conditions, the system sat at the desktop for 30 minutes, and the reading was taken. For the load condition, GPU-Z was used to ensure the GPU reached 100% utilization and Heaven was run four time while monitoring the power consumption.

Power Consumption Results: At idle the R7950 used more power than the HD7870, but less than the GTX 560Ti, that’s a good thing. At 100% GPU utilization, it consumed 167W of power, making the entire system utilization be 272W.

With any fan, some noise will be generated. How much noise depends on the fan. A sound meter was used to evaluate how much noise was generated by the test system. By placing the sound meter approximately 6 inches from the video card we measured the sound level at different fan speeds.

With the system turned off, and all extra noise lowered, the room has a sound level of 32.7dBA, it is pretty quiet with everything turned off. Once the test system is turned on, the sound level jumps to 39.4dBA, so overall the system (sitting idle at the desktop) increases the sound by 6.7 decibels. Once a game kicks the GPU into high gear, and the fans turn on, the volume increases by a mere 0.8 decibels; so at idle it can’t be detected. Manually increasing the fan speed to 100%, the noise level was easily noticeable since it increased to 44.3dBA, or 4.9 decibels. Still very quiet.