The previous page of synthetic benchmarks looks great and makes it easy to compare performance, but what about real world testing? For this we did some drag and drop transfer tests using some movies from our desktops OCZ 120GB Vertex EX SLC SSD to the My Book World Edition II NAS device. 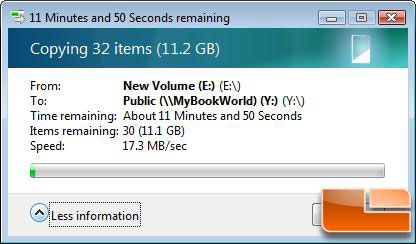 The upload the 11.1GB movie file to the WD My Book World Edition II took roughly 13 minutes and the upload speeds topped out at around 16MB/s to 18MB/s. 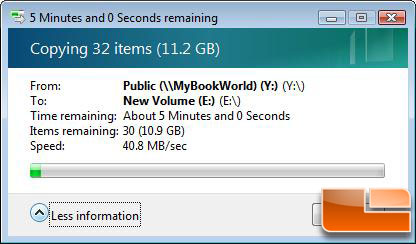 Once the files were uploaded to the network attached storage server, we then downloaded them to a new location on the client machine. The download speed was quicker at just over five minutes and the top speed seen was 40.8MB/s during the download. 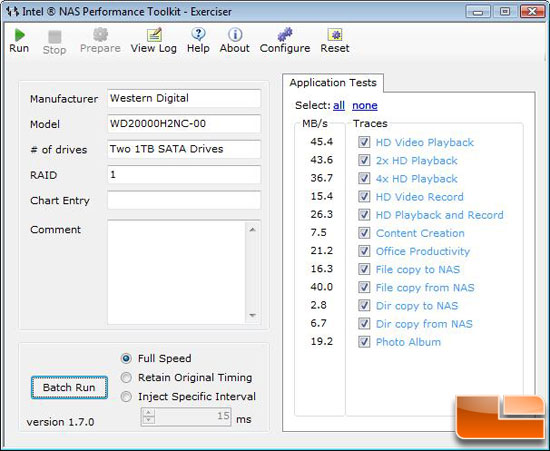 The Intel NAS Performance Toolkit is one of the only benchmarks that we are aware of that was designed from the ground up just to measure NAS performance. The benchmark tests 18 different test scenarios to give you a great overall idea of how the NAS performs. The Intel NAS Performance Toolkit reported 16MB/s file copy speed to the NAS and 40MB/s file copy speeds from the device. This confirms our drag and drop testing that showed 17MB/s to and 41MB/s from the WD My Book World Edition II.

Our benchmark results show that you dont get the speed of something like eSATA or a high-end NAS server, but the My Book does fairly well for how it has been designed and for a RAID 1 array. Higher-end NAS devices can cost over $500, not including the hard drives, so to hit greater speeds you need to dig much deeper into your wallet.