Back in 2017 Toshiba (now KIOXIA) introduced the XG5-P series of single-sided M.2 2280 form factor NVMe PCIe 3.0 x4 SSDs in 1TB and 2TB capacities. The drives featured performance of up to 3000 MB/s sequential read, 2200 MB/s sequential write, 320,000 random read IOPS and 265,000 random write IOPS. These drives were sold as OEM client drives that were targeted to systems being built for gaming/enthusiast PCs, workstation PCs and even read-intensive enterprise applications. OEMs like Dell and HP purchased large quantities of these drives for their systems over the years and it appears that some of the surplus drives are entering the market from 3rd party sellers that were able to acquire leftover stock.

One of those companies would be MyDigitalDiscount, who purchased a large quantity of KIOXIA KXG50PNV2T04 XG5-P 2TB NVMe SSDs from what looks like HP. MyDigitalDiscount is now selling these 2TB drives on Amazon for $219.99 shippped ($0.11 per GB) after a coupon is applied and backing them with a 3-year warranty. Since this is an OEM drive by KIOXIA (Toshiba Memory) sold to HP there no physical drive warranty from either of those companies. We’ve worked with MyDigitalDiscount.com Inc. for over half a decade and the company has been open for 19 years, so it is a small American owned business that we trust.

The label of the drive shows that the part number of this drive is KXG50PNV2T04 and that is not the self-encrypting drive (SED) model. The label shows that this drive was produced November 20th, 2019. That is a fairly recent date and hopefully firmware version AFHB4101 is still the latest version. We searched for a newer firmware, but couldn’t find anything. Firmware updates are not released by KIOXIA to end users, so any updates would have to be provided by HP support, but without knowing what model PC that these devices were supposed to be in makes that tough. We should also point out that only HP released FW updates will work on this SSD as the update is locked by KIOXIA to each of their customers. 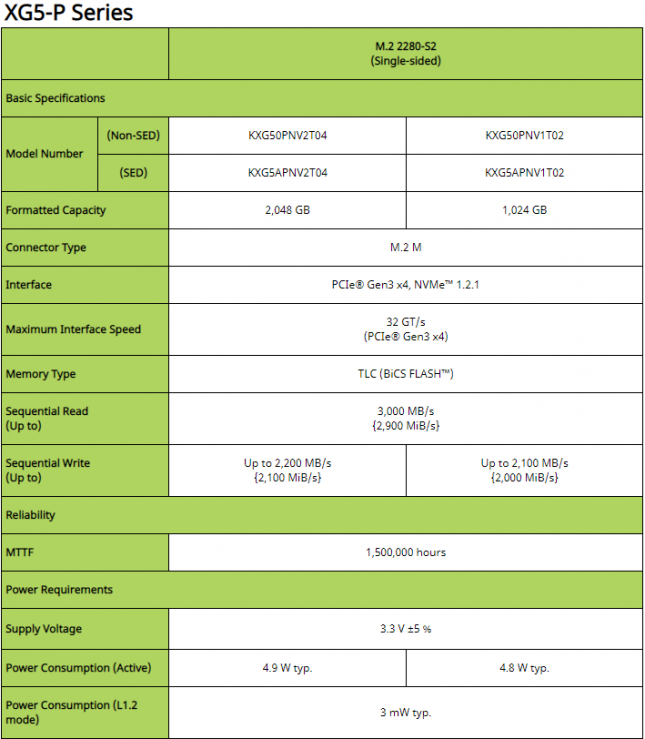 Looking at the specifications of the XG5-P 2TB drive you can see that it is rated as having up to 3,000 MB/s sequential read and 2,200 MB/s sequential write speeds. Power consumption is sitting at 3 mW typical for the L1.2 low power state and 4.9W typical during active usage.

Flipping the drive over you can see that there are no components located on the back of this single-sided drive.

Let’s take a look at the test system and get to the XG5-P benchmarks!