The Samsung 980 PRO series of PCIe 4.0 NVMe SSDs was introduced in September 2020 and raised the bar for what one can expect from a consumer storage drive. Legit Reviews did a review on the Samsung 980 PRO for the launch and managed to hit speeds of nearly 7 GB/s read and 5 GB/s write. The Samsung 980 PRO was launched with capacities of 250GB, 500GB and 1TB. There was no 2TB capacity drive available and that left many enthusiasts and content creators waiting to see what would come next. That all changed this month as Samsung as introduced a 2TB version of the 980 PRO! This is the largest capacity that you can get their flagship SSD in now and it runs $429.99 or about $0.22 per GB.

Performance ultimately depends on the Samsung SSD 980 PRO drive capacity, so we’ve included the table below to give you a quick look at the key differences of each of the drives. The Samsung SSD 980 PRO 250GB is capable of reaching 6.4 GB/s read and 2.7 GB/s write whereas the 2TB model reaches 7.0 GB/s read and 5.1 GB/s write. PCIe 4.0 has a theoretical maximum bandwidth is 8,000 MB/s, so we are starting to approach maximum sequential read speeds already! 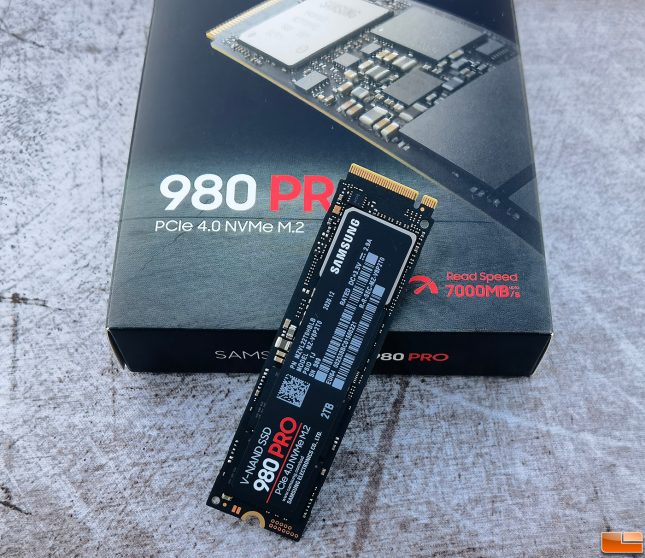 Samsung sent over the new 2TB version of the 980 PRO SSD for us to check out our AMD Ryzen X570 platform! This is more or less just a capacity bump in the 980 PRO series, so we’ll make this just a quick overview of the drive and get to testing.

The Samsung SSD 980 PRO series features 6th Generation V-NAND that has over 100-layers making up the TLC memory. Samsung uses 3D charge trap flash (CTF) cells on this generation and claims it delivers 10% lower latency for read/write operations and offers up to 15% lower power than their previous V-NAND.

Samsung is also introducing a new SSD controller called Elpis that is built on the 8nm manufacturing process for the 980 PRO series. This is the industries first native PCIe Express 4.0 controller and supports 128 queues. The previous controller was called Phoenix and supported just 32 queues.

All Samsung SSD 980 Pro drives feature Dynamic Thermal Guard (DTG) technology to reduce thermal throttling. On the back of the SSD 980 PRO 2TB you’ll find a label that has a thin piece of copper in it to help dissipate heat. The Elpis controller on the front of the drive has a nickel coating on it that also helps to dissipate heat faster during heavy workloads. It is nice that the 2TB model of the 980 PRO is single sided! 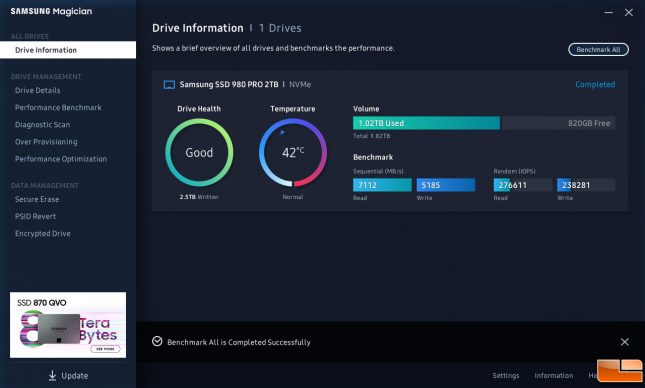 Samsung has made upgrading an existing system to this model super easy as they have include data migration software. The Samsung Data Migration Software can be downloaded here along with the latest version of Samsung Magician 6. Samsung Magician 6 software helps you monitor and manage your SSD!

It also has a built-in performance test that does four corner testing. This benchmark shows the 980 PRO 2TB drive reached 7112 MB/s read and 5185 MB/s write for sequential performance and 276,611 IOPS Random Read and 238,281 IOPS Random Write as the boot drive. We test with ~55% data fill on the drive, so these are respectable numbers. 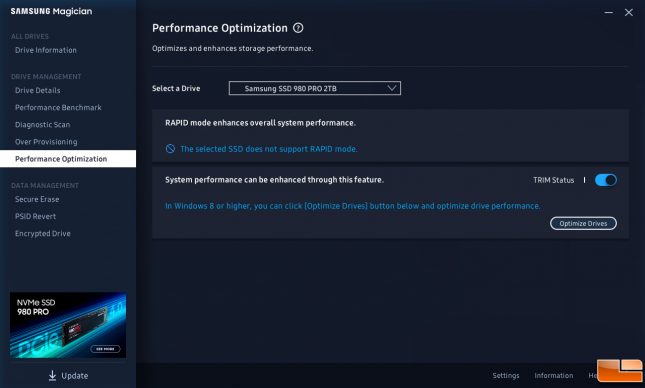 Samsung Magician also allows you to enable over provisioning, enable TRIM and run a diagnostic scan.

Let’s take a look at the test system and then show you how the Samsung SSD 980 PRO did on our usual test suite.