Those that were disappointed by the lack of a 2TB option when the Samsung SSD 980 PRO series arrived will be ecstatic with this release. We aren’t sure why Samsung didn’t have the 980 PRO 2TB at launch, but it is here and performance appears to be excellent. The Samsung SSD 980 PRO is competitive with the other leading drives on the market today.

On our AMD X570 test platform we managed to reach 6754 MB/s read and 5019 MB/s write on the Samsung SSD 980 PRO 2TB drive. That is just below the drives rated speeds of 7000 MB/s read and 5100 MB/s write. The only benchmark test that showed we were capable of reaching the drives speed specifications was Samsung Magician. We’ve heard rumors that Samsung might be releasing an NVMe driver for the 980 PRO series. The installer for the current Samsung NVMe drivers has installation blocked on the 980 PRO. 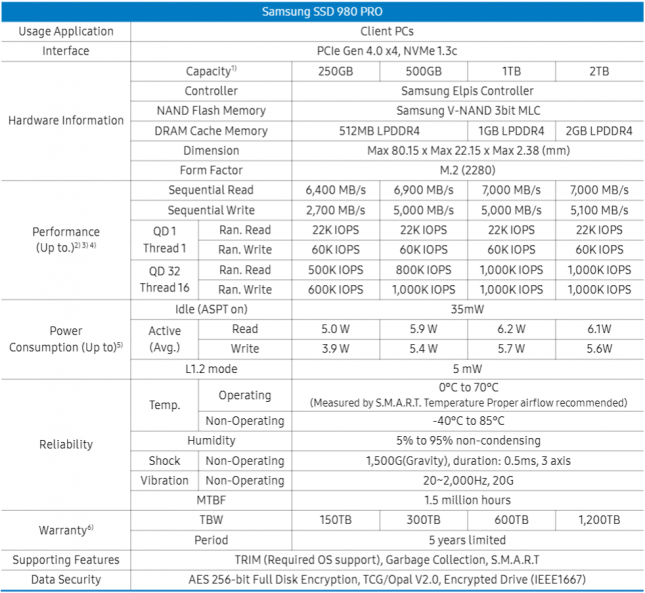 Pricing on the Samsung SSD 980 PRO series is $429 for 2TB, $229 for 1TB, $149 for 500GB and $89 for 250GB. There is a capacity for nearly every price point and all are backed by a 5-year warranty. The endurance ratings on the 980 PRO series are not as high as some brands, but we’ve never seen or heard of any consumer getting a warranty denied due to being over the TBW rating.

At the end of the day the Samsung 980 PRO 2TB drive is a competitive drive against other 2TB models that have recently come to market.

Legit Bottom Line: The Samsung SSD 980 PRO is now available in a 2TB capacity drive and it offers similar performance and power consumption to the 980 PRO 1TB.