Plextor made headlines at the Consumer Electronics Show earlier this month when they debuted the M6e Black Edition PCI Express Gen 2×2 SSD as well as the M7e PCI Express Gen 2×4 SSD. The Plextor M7e PCIe SSD looked amazing at the show and in CrystalDiskMark it was showing 1411MB/s Sequential Read and 1028MB/s Sequential Write speeds. Those are damn impressive performance numbers, but our sources are skeptical that the Plextor M7e will debut in Q2 2015 and believe that a 2H 2015 launch is most likely. So, if you don’t want to wait around 5 months for the Plextor M7e that means you are left with the Plextor M6e series. The Plextor M6e debuted at CES 2014 and was designed to the first PCIe SSD aimed at gamers with read/write speeds of 770/625MB/s and random read/write speeds of 105K/100K IOPS thanks to the PCIe Gen2 x 2 interface. The M6e 256GB PCIe SSD did okay in our performance review, but the add-in card featured a traditional green PCB and silver back panel bracket. Plextor has come up with the M6e Black Edition PCIe SSD series, which is basically a gamer themed makeover for what was originally a pretty bland card. 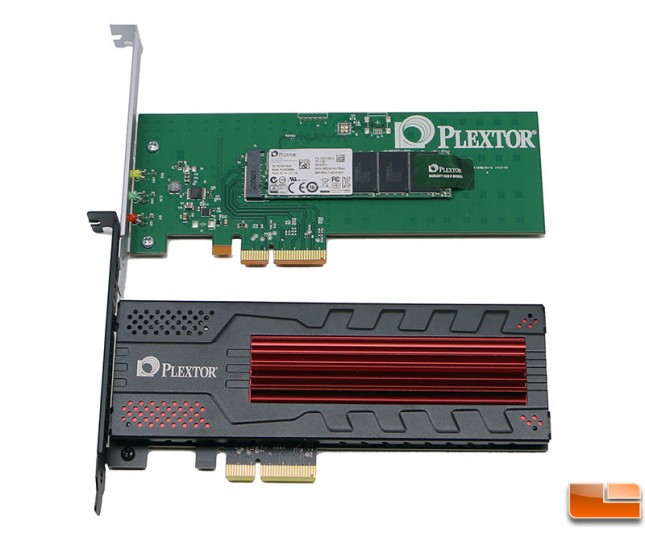 As you can see from the image above the Plextor M6e Black Edition on the bottom certainly looks more gamer-centric than the original M6e on the top. The red heatsink that covers the M.2 SSD is functional and Plextor says that it helps lower the temperature of the SSD by an average of 10C in all three capacities. The only problem with the Plextor M6e Black Edition PCIe SSD is that the hardware specifications are exactly the same as the original. There no performance differences between the M6e and the M6e Black. Both feature server-grade multicore Marvell 88SS9183 controllers with native PCI 2.0 support and feature Toshiba A19 Toggle NAND flash. The Plextor M6e Black PCI Express Series SSD is available in 128GB, 256GB and 512GB capacities, which also remains unchanged.

It is slightly disappointing that the M6e Black has the same exact speeds as the standard Plextor M6e PCI Express Series SSD is rated at and brings nothing really new to the table other than the PCB is mounted to and the new heatsink. While the performance numbers are exactly the same we have learned that the M6e Black Edition will include PlexTurbo 2.0, the latest generation of solid state memory cache solutions developed by Plextor. This newly developed caching solution will allow power users to increase system memory size by up to 4GB. Additionally, PlexTurbo 2.0 caching utility features data loss protection during sudden power interruptions or system crashes. Plextor believes that caching will improve performance and significantly reduce write usage on the SSD, which in turn improves the longevity of the Flash memory. Unfortunately as you’ll see later in this review the PlexTurbo 2.0 software works with the original M6e drives, so it isn’t a feature that is exclusive to the M6e Black.

Our friends at Plextor sent over the M6e Black Edition 256GB PCI Express SSD to try out. Inside the retail packaging you get the drive itself, mounting screws, owners manual and a VIP sticker. The Plesxtor M6e Black Edition PCIe Card features a slick looking read and black color scheme that is sure to be a hit with both gamers and enthusiasts. Plextor did more than just change the color of the PCB though as they have added a standard SATA 15-pin external power header to the top and a 2-pin external LED header for SSD access lighting cues. We aren’t sure how many people will use either of these features, but they are present. Plextor also placed five LED lights (2 yellow and 3 blue) along the top edge of the card that show if the SSD is powered up and the blue lights flash when the drive is being accessed.

Please note that the SATA power connector is only needed when the motherboard PCIe slot is incapable of supplying enough power to the Plextor M6e Black Edition PCIe SSD. We doubt many will need to use this connector, but it is there if needed. The quick installation guide also shows that the external access light is to hook up the PCIe cards access light to the lights on a front panel of a computer.

Here are the internal Lite-On Power consumption numbers for those that are curious about the power differences between the Plextor M6e Black Edition 128GB, 256GB and 512GB PCIe SSDs. For the 256GB card we are looking at in today you can see there it uses 0.13W in sleep mode, 0.60W at idle and then tops out at 3.2W under full load.

To get the most from the Plextor M6e Black Edition drive you need to install Plextool software. A driver disc will come in the retail packaging or you can download the latest version from Plextor’s website. Plextool is basically Plextor’s SSD toolbox and allows you do a number of things with your SSD. The gallery above shows the installation procedure, which is painless and takes just seconds.

Once you get Plextool installed you’ll find the main menu (drive status) is a bit busy, but it shows you all the pertinent information. For example you have the overall capacity of the drive, free space, used space, drive health, interface type, temperature and whether or not TRIM is enabled. Along the bottom of the Plextool Utility there are seven tabs. The info screen basically tells you what drive status menu shows. You can also use Plextool to Secure Format and Firmware Update your SSD. You can also view all the S.M.A.R.T. information of the drive as well as run a diagnostic scan of your drive to check for any issues. Lastly, there is the PlexTurbo tab that you can use on the Plextor M6Pro and M6e series to use system RAM to accelerate read/write performance to reduce duplicate writes to the SSD.