The Intel Pentium G4400 is a locked processor meaning it can’t be overclocked; at least not normally.  There was a “bug” that was found within the Skylake processor that allowed non-K processors to be overclocked.  If you are lucky enough, there might be a firmware that would allow you to overclock your locked processor.  Of course, Intel has fixed that bug with BIOS updates; so overclocking the G4400 will be determined by the BIOS version on your specific motherboard.  The test motherboard, EVGA Z170FTW supports BCLK overclocking on non-K processors with BIOS 1.07. 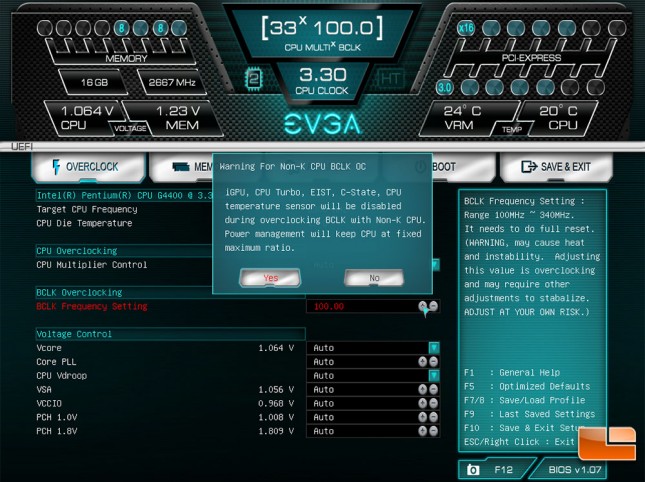 EVGA warns you about some limitations when overclocking a Non-K processor.  Several critical components will be disabled such as IGP (we’ll be using a discreet card anyways), CPU Turbo, EIST (SpeedStep), C-State (built-in power modes), CPU Temperature sensor and Power Management.  To achieve the best overclock possible, you really need to have several of these.  The lack of a temperature sensor for example, increases the risk of frying your processor.  No power management, means you can’t increase the voltage to the processor.  With these in mind, let’s increase the BCLK and see what we can get. 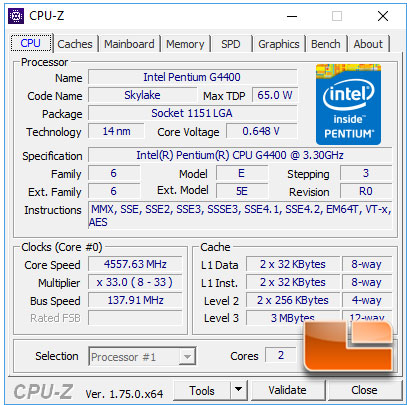 Slowly increasing the BCLK by 5, we were able to successfully boot up to 140.0  At that point, we were unable to boot.  Backing it down to 135, we started increasing it by 1.  The last successful boot was 137.0.  Anything above that, the fans on the Corsair H105 immediately went to full speed and it would fail to boot.