While monitoring the CPU temperature, the testing environment was kept at a constant 72F (22.2C).  Using HardwareMonitor we were able to keep track of the minimum and maximum temperatures the CPU received. 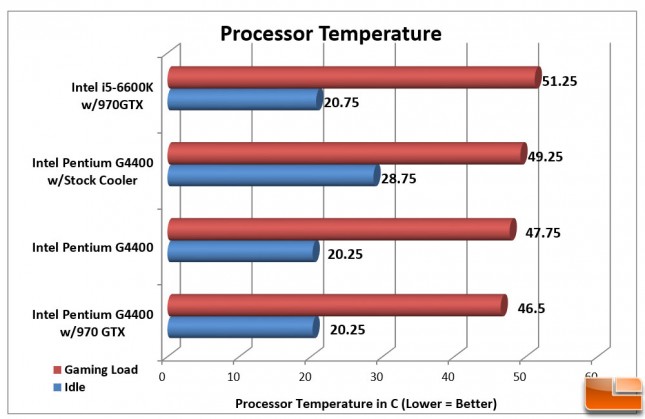 Benchmark Results:  Not much difference in idle temperature between the two test systems.  Under a heavy load, the G4400 really doesn’t heat up even though it is using the IGP to it’s maximum.  Although the idle temperatures were higher, the Intel stock cooler appears to do a good job with cooling the G4400, even compared to the cooling provided by the H105; which was a surprise.  With the EVGA 970GTX, there is about 5C difference between the i5-6600K and the G4400 test systems.  That’s a nice difference in temperatures for slightly less performance while gaming.  Unfortunately, one of the downsides to overclocking the G4400 is that the thermal sensors are disabled, without using an external monitor we do not have any idea of the temperature.

Using a standard P3 Kill-A-Watt meter we monitored the power consumption of the systems during testing.  We made note of the lowest and highest readings throughout all phases of testing. 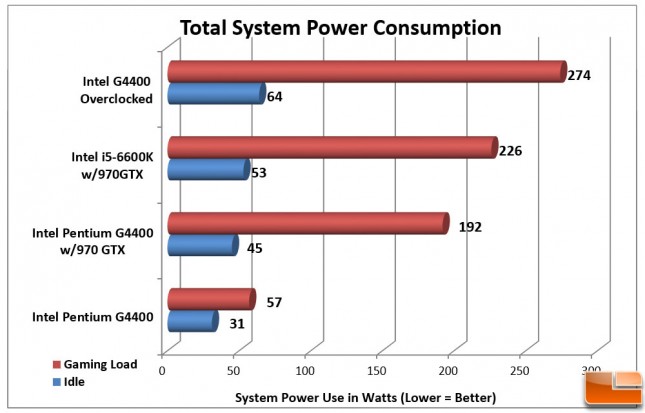 Benchmark Results:  As you might expect, at idle the Intel Pentium G4400 uses the least amount of power.  Using the IGP, the G4400 power usage increased by a small amount of power for very little performance.  Comparing the two test systems with the EVGA 970GTX, there was a significant difference in power usage between the i5-6600K and the G4400.  In addition to disabling the thermal sensors, EVGA also disables the power management features of the Z170 FTW, it manages it by itself, and we saw a huge jump in power with the G4400 overclocked.