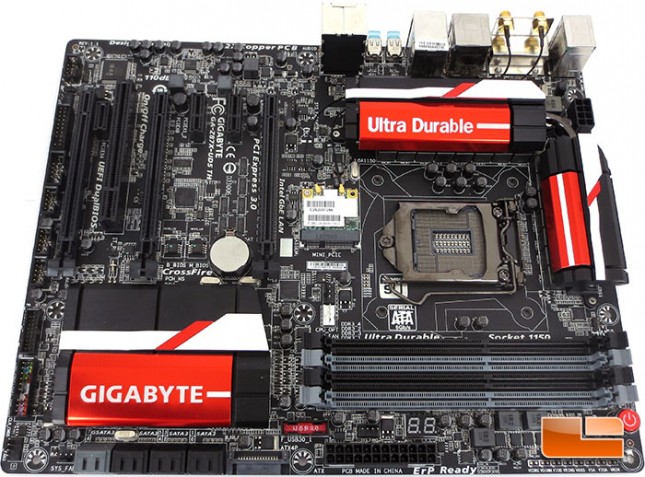 The GIGABYTE Z87X-UD5 TH is nothing short of a nice looking board. The black PCB is accented with black expansion slots, black and grey DIMM slots along with black red and silver heat sinks. 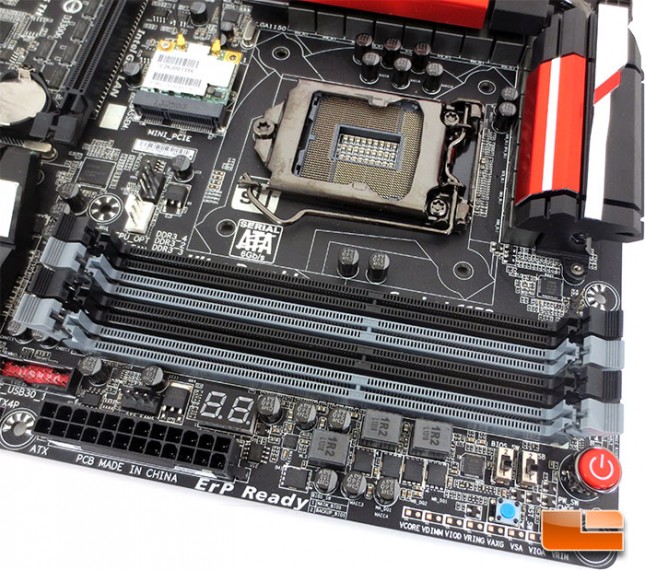 The GIGABYTE Z87X-UD5 TH has the usual four DDR3 DIMM slots that will support up to 32GB of DDR3 memory at speeds up to 3000MHz! Surrounding the DIMM slots of the Z87X-UD5 TH GIGABYTE didn’t leave much out. At the corner of the board is the power, reset, and BIOS reset switch as well as a the Voltage check points. In the same general area as the buttons is a pair of dip switches for the BIOS options. The left switch labeled BIOS_SW will toggle the Z87X-UD5 TH between the main BIOS and the backup BIOS while the right switch will change it between single BIOS and dual BIOS. Sliding left along the board there is the typical 24pin motherboard power with a 4pin fan header and Debug LED display. On the left hand side just above the DIMM slots is the CPU Fan headers, 2x 4pin. This spot caught me off guard, but I think I like this spot better than along the edge of the motherboard, a little easier to access inside of a chassis. 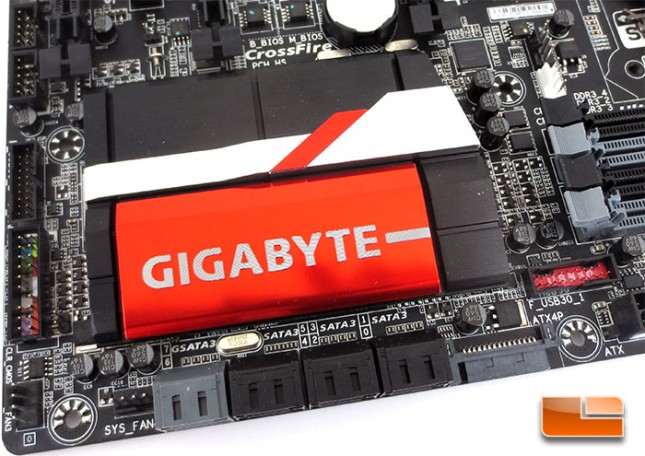 Along the right side of the above image is one of two internal SuperSpeed USB 3.0 headers. Along the edge of the Z87X-UD5 TH we have the SATA power for the PCIe x16 expansion slots, and eight SATA III 6Gbps ports. The black SATA III ports are native to the Intel Z87 chipset while the pair of grey ports are from a Marvell 88SE9172 controller chip. Continuing along the edge there is an additional pair of 4pin System Fan headers. The technicolor pin out on the left edge is for the front panel, this includes the power/reset switches, HDD activity light, and power light. Above the front panel pin out is the second of the internal SuperSpeed USB 3.0 headers while three internal USB 2 headers follow. 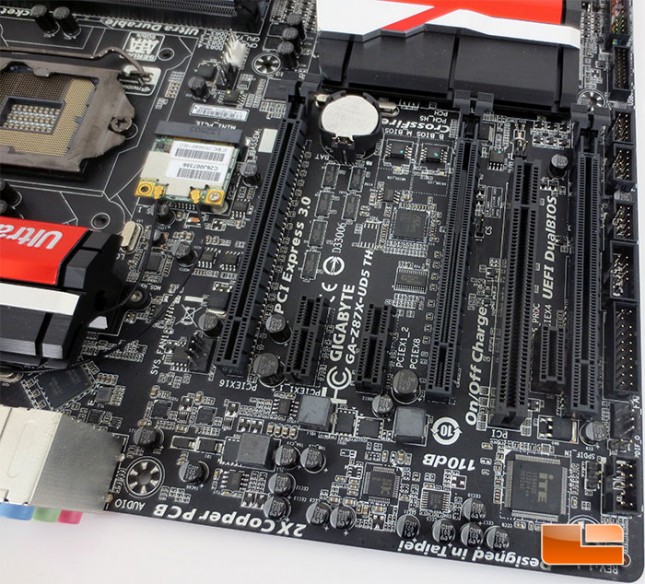 Spinning the GIGABYTE Z87X-UD5 TH around to the other side, there are a number of items here worth pointing out. First and foremost is the expansion slots, the GIGABYTE Z87X-UD5 TH is equipped with three PCIe x16 slots, two PCIe x4 slots, a single PCIe x1 slot and a legacy PCI slot. The first pair of PCIe x16 slots share the bandwidth, if only the first slots has a card in it, it will operate at x16. Once the second slot is populated both the first and second slot will operate at x8. The third PCIe x16 slot also shares the bandwidth and operates at x4. If all three slots are occupied it be working in an x8,x4,x4 configuration. Despite having three PCIe x16 slots the Z87X-UD5 TH will only support 2way NVIDIA SLI and 2way AMD CrossFire. Along the right edge of the Z87X-UD5 TH there is a COMM port, TPM (Trusted Platform Module), 4pin System Fan header, and the front panel audio header. 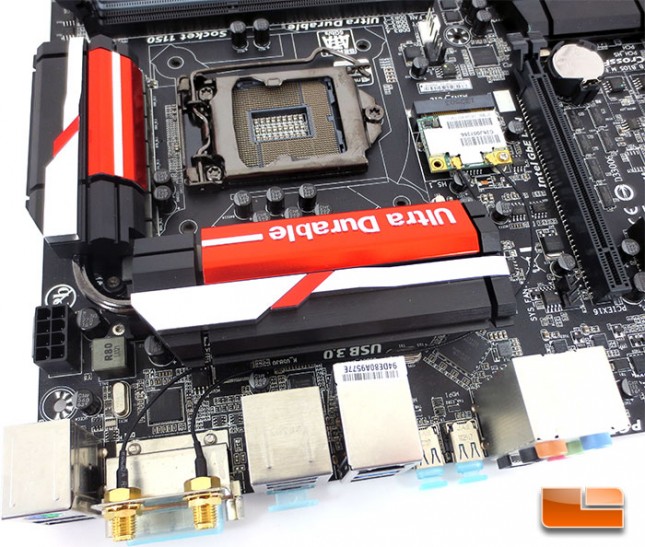 The GIGABYTE Z87X-UD5 TH uses an 8pin power for the CPU. The Haswell LGA1150 processors don’t require a ton of power, even when overclocking so there’s no real reason to have a second CPU power plug available like we’ve seen on other Intel boards. The Z87X-UD5 TH features an 802.11AC WiFi + Bluetooth 4.0 card installed into a mini PCIe slot, the antenna wires run from the card to the I/O panel were you can attach the external antennas.

The GIGABYTE Z87X-UD5 TH I/O panel isn’t far off the norm, but what is different is rather significant. GIGABYTE eliminated all of the USB 2 ports on the back and upgraded them all to the latest and greatest SuperSpeed USB 3.0, six of them are here on the back panel while there are two more internal USB 3 headers that allow for 10 total SuperSpeed USB 3.0 ports. Each of Intel LGA 1150 processors has a graphics core built in, to take advantage of this the I/O panel on the Z87X-UD5 TH has a DVI-I and a HDMI 1.4A port. Above the DVI-I port is the pair of antennas for the integrated 802.11AC WiFi + Bluetooth 4.0. In addition to the aforementioned connectivity, the GIGABYTE Z87X-UD5 TH features a pair of Thunderbolt ports. 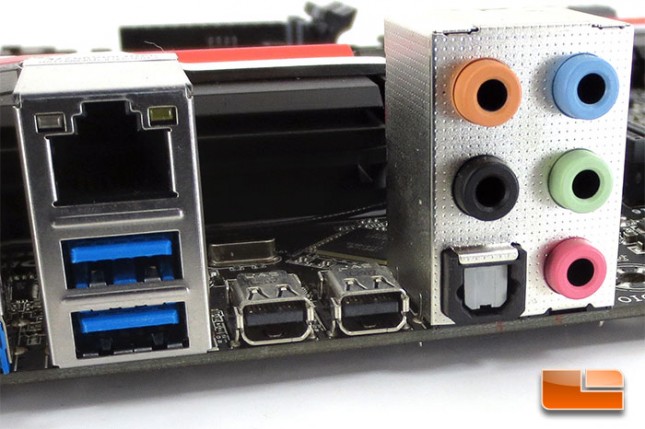 Each of the Thunderbolt ports on the GIGABYTE Z87X-UD5 TH is capable of connecting as many as 12 devices and 3 digital displays simultaneously. The Thunderbolt ports are able to transfer 1TB of data in as little as 5 minutes with theoretical speeds as high as 10Gbps, twice that of SuperSpeed USB 3.0 at 5Gbps. 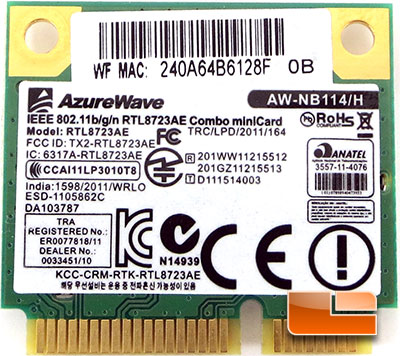 The GIGABYTE Z87X-UD5 TH that we were sent is a pre-production version of the board. The PCB and all of it components are the real deal, but the WiFi module that was included isn’t the 802.11ac version. Instead we received a wireless N card, an AzureWave IEEE802.11b/g/n RTK8723AE, while it’s still fast it isn’t what will come with the retail boards and for the time being we are going to skip testing it. GIGABYTE is sending out the proper hardware and we will update the article when the time comes. 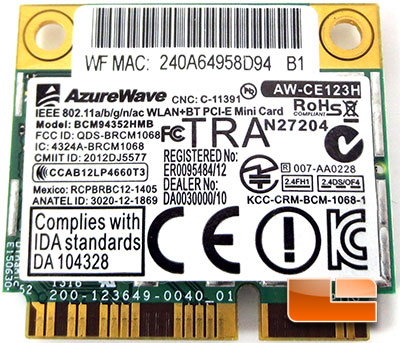 GIGABYTE sent us out a new Z87X-UD5 TH motherboard with the proper WiFi card installed. Installed in the board is an AzureWave AW-CE123H IEEE802.11a/b/g/n/ac mini PCIe card. Now that we have a production board we can test the network performance a little later on.