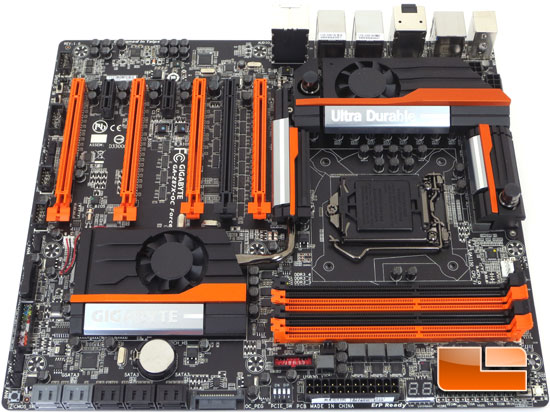 When it comes down to it, the looks of the GIGABYTE Z87X-OC Force gave me mixed feelings. Mainly because I’m not one who would typically have anything orange, it’s just not me. After staring at the Z87X-OC Force for a bit while working with it, I’ve grown to like it. The Black PCB and heat sinks are accented by the orange PCIe x16 slots and DIMM slots and the orange on the heat sinks throws a little contrast to them. While it really doesn’t make a bit of difference to me what the board looks like as long as is has the performance and features that I need. 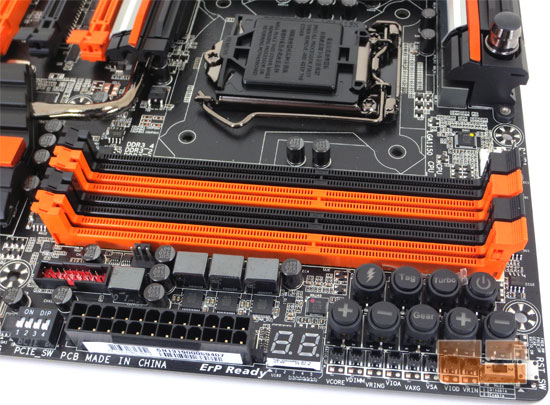 This is where much of the overclocking goodness happens, at least the features pertaining to overclocking. The GIGABYTE Z87X-OC Force OC Touch panel allows direct hardware level overclocking without heading into the GIGABYTE UEFI BIOS. On the OC Touch panel you can tweak the CPU Multiplier, Bclk, set the OC Ignition, and of course the Turbo. Just to the south of the OC Panel is a series of voltage check points, we can check the CPU VCore, VDIMM, VRING, VIGA, and several others. The simplest way is to take advantage of the leads that plug in that are included in the bundle. Along the left side of the photo we can find the PCIe Dip switches. These allow us to turn off each of the four PCIe x16 expansion slots to save some power. Above that is the first internal SuperSpeed USB 3.0 header. The GIGABYTE Z87X-OC Force can support up to 32Gb of DDR3 and speeds as fast as 3000MHz(OC)! 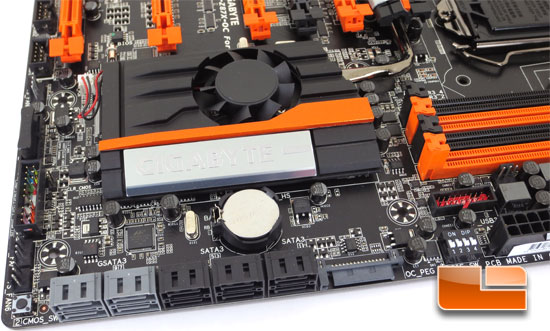 Swinging the GIGABYTE Z87X-OC Force around the first feature that jumps out is the number of SATA ports, 10 in total. Six of the SATA ports are SATA III 6Gbps powered by the Intel Z87 chipset, the remaining for are from a Marvell 88SE9230 SATA III 6Gbps controller chip. To the right of the SATA III ports is a SATA power plug, while you may expect this to be for the SATA ports, it’s actually to supply extra juice to the PCIe x16 expansion slots. To the left of the SATA III ports is the CMOS reset switch and a pair of fan headers just above there. Continuing up the edge of the GIGABYTE Z87X-OC Force we can find the header for the front panel, the second Internal SuperSpeed USB 3.0 header, a 4pin fan header and a pair of internal USB 2.0 headers. The heatsink features a fan to keep the heat on the chipset at bay, the heatsink is connected to the heatsink over the PLX chip via heatpipe. 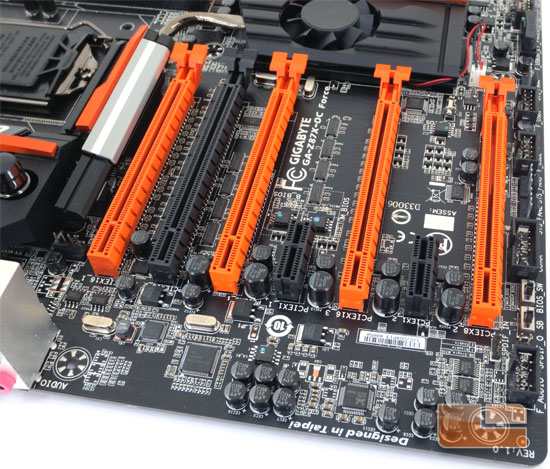 Quite possibly the most important feature here is the expansion slots, there is a total of five five physical PCIe x16 slots and a pair of PCIe x1 slots. The Intel Z87 chipset doesn’t have enough PCIe lanes to supply this many PCIe x16 slots so GIGABYTE is using a PLX chip on the Z87X-OC Force to add additional lanes. Towards the leading edge of the GIGABYTE Z87X-OC Force we can find a few of the IC’s that drive the peripherals, first up is the Realtek ALC898 High Definition audio codec. 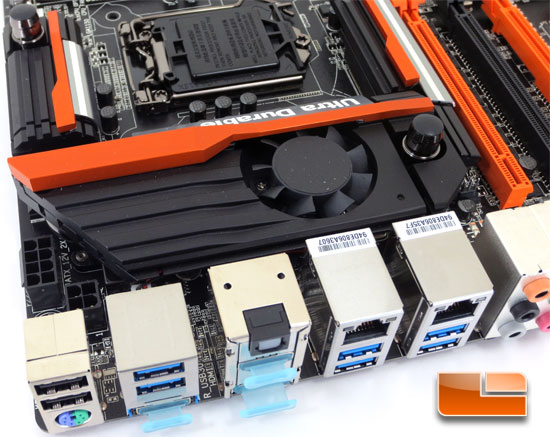 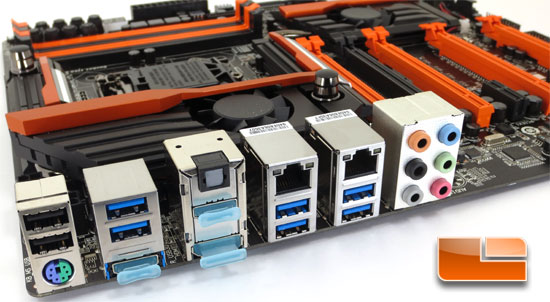 The I/O panel of the GIGABYTE Z87X-OC Force is packed with connectivity, there is a total of eight USB ports, six of which are SuperSpeed USB 3.0 from the Intel Z87 chipset. This was accomplished using a pair Renesas uPD720210 USB 3.0 hubs, the remaining two USB ports are USB 2.0. We also have a pair of Gigabit Ethernet jacks powered by Intel GbE LAN chips with support for teaming. If you’re planning on running the Intel graphics, you can connect to the motherboard via a pair of HDMI 1.4a ports or through a DisplayPort, 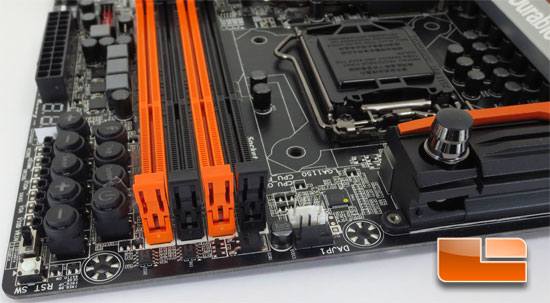 The GIGABYTE Z87X-OC Force features a pair of 4pin CPU fans. This is great for those using CPU cooler with a push/pull configuration or a water cooler like the Corsair H100i.