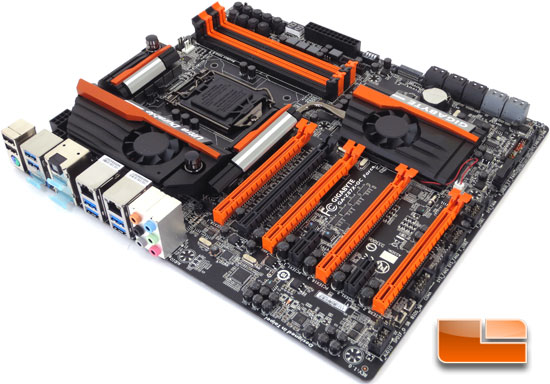 A couple of years ago GIGABYTE launched the X58A-OC Intel X58 Motherboard. It was geared specifically for overclockers and was virtually nothing but a chipset, socket, and expansion slots. While the X58A-OC had it’s place, the latest iteration in the GIGABYTE OC series has a place that can fit many more users. The GIGABYTE Z87X-OC Force is designed for those extreme overclockers with features like OC Touch, OC PCIe Switch, and one of the latest GIGABYTE features OC Ignition. It has all of the overclocking features, but it also has the features that today’s computer enthusiast is looking for! Since the GIGABYTE Z87X-OC Force looks like it will be a motherboard that will be a top contender for both extreme overclocking, and computer enthusiasts it does carry a bit of a heavy price with it, currently it can be had for $409.78 shipped. Not a board for those on a tight budget, if you’re looking for a board that will do everything, the GIGABYTE Z87X-OC Force may be what you’re looking for. Let take a closer look at the features.

One of the features that I mentioned is new to GIGABYTE with the Z87X-OC Force. OC Ignition is a feature that will allow you to supply power through the motherboard to the peripherals in your system without booting the system! It may not be something that will be used everyday, it is a great feature for those that need some juice without booting the system up. If you are working on case mods that need some power, leak testing a water cooling rig, or for those playing with some LN2 it will allow you to keep the fans spinning to reduce the moisture while the CPU warms up all you’ll have to do is depress the OC Ignition button and all you’re fans and hard drives now have power.

The GIGABYTE Z87X-OC Force also has the OC Touch feature that we can see above. From this series of buttons there isn’t much that we cant tweak during overclocking sessions. From this panel we can change the CPU multiplier, CPU Bclk, OC Gear Bclk steppings, monitor the various system voltages, as well as power on and reset the system. There are a couple of other features that are worth going into a little more detail. The first is the OC Tag button, the OC Tag button will apply the setting tied to the Tag profile within the GIGABYTE Z87X-OC Force UEFI BIOS. The OC Trigger Switch will bring your system into what could be considered a safe mode for the system. This will bring the system to the default system settings regardless of the settings actually being used in the BIOS. 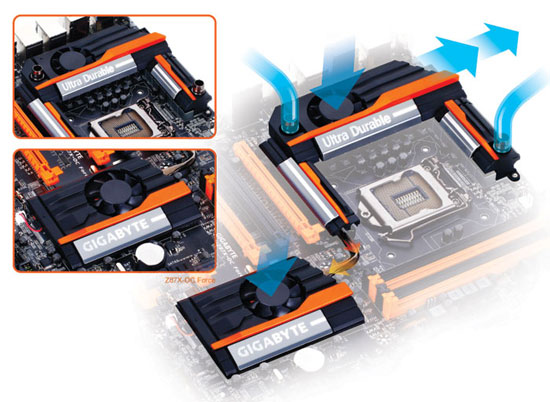 The fine folks at GIGABYTE realized that an OC board needed a little more than passive cooling on all the various components of the board. They first threw on a couple of small fans, one on the Intel Z87 chipset, and one on the PWM heatsink. We all know how hot that can get when adding the extra juice needed to break those overclocking records, whether your own personal records or world records. Getting a little airflow through the heatsinks will certainly help. They went a step further though, across the PWM’s they also integrated water cooling, just for that added kick!

Got all that? Good! Let’s take a closer look at the layout of the GIGABYTE Z87X-OC Force on the next page!