The Intel Core i7-7700K processor has a base of 4.2GHz and boost of 4.5GHz, let’s first begin by using Easy Tune to see what it thinks the best overclock is for the hardware. With a simple click of a few buttons, it reboots the system and begins the testing. After a few minutes, it settles on 4.8GHz and runs through a quick stress test. After the stress test, it determines that 4.8GHz is the best overclock for the system, providing approximately 7% boost in clock speed.

Let’s enter the BIOS, and begin adjusting the ratio, to see if manual tuning can get it any better. The Gaming 9 offers a wide range of fine tuning options that the experts will find useful. For our manual overclocking, we will adjust the CPU Clock Ratio from it’s default 42, by 1. If we successfully boot into windows, we run a quick stress test and then reboot to increase the CPU Clock Ratio again. Once we get a failure on the stress test, we back the CPU Clock Ratio down 1, and begin the testing phase. This is just a quick and easy way to get an overclock, you can spend many hours tweaking the voltages, and individual settings to get better overclock.

With a CPU Clock Ratio of 52 (5.2GHz), we were unable to boot into Windows. We took it back down to 51 (5.1GHz) and began testing. At this point, all of the benchmarks ran successfully, however they did not perform as expected. I checked the voltage, and the motherboard automatically increased the voltage to the processor as needed, CPUz was reporting the core voltage being 1.36V. At 5.0GHz, the benchmarks were successful, and showed an expected performance improvement.

Overclocking the memory, we took a similar stance; increasing the System Memory Multiplier until we had issues, and then dropping it down a step. Previously we have seen the Kingston HyperX Fury kit reach up to 3200MHz on one Z170 motherboard, however the average for this memory kit across the Z170 chipset was 2966MHz. On the Gigabyte Aorus Z270X Gaming 9, we were able to get the memory up to 3100MHz without any issues. Going above that, we would fail to load windows or get random lock-ups within Windows; we feel that this is a limitation on the Kingston HyperX Fury DDR4 memory kit, and not the motherboard. The Aorus Z270X Gaming-9 motherboard is capable of handling the fastest DDR4 memory available as its specifications show 4000+ MHz with the proper memory kit.

When peforming benchmarks in the overclock state, we will use 5.0GHz for the CPU and 3100MHz for the memory.

I have the Gigabyte Aorus Z270X-Gaming 9 board as well and was able to get up to 5.1GHz stable on the CPU and the DDR4 memory running at 4000 MHz with a 32GB kit from Corsair, so just keep in mind that overclocking performance varies and that your memory kit and processor will likely be the limiting factor and every one is slightly different. 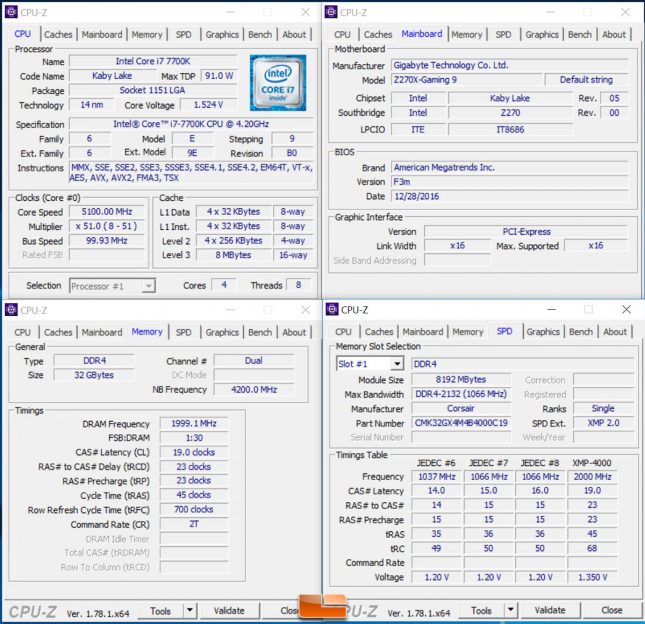