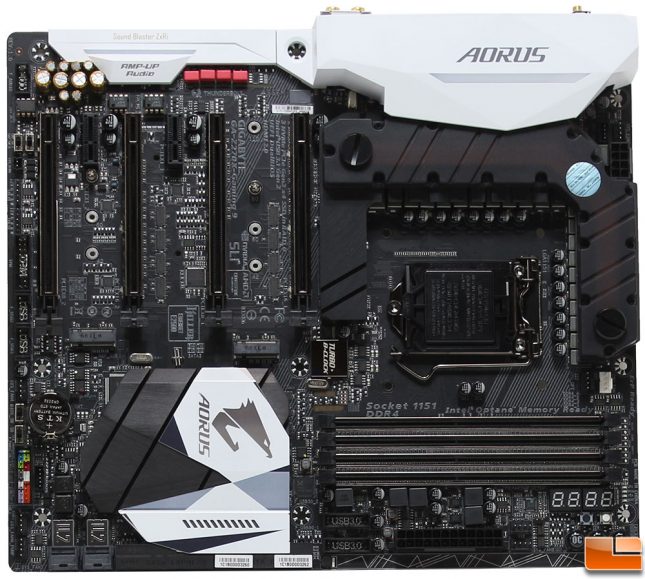 As this motherboard is designed for the enthusiast there are many enthusiast grade features.  For example, cooling options is provided by 8 different fan headers, 2 of which are marked for the CPU.  In addition, there are two water cooling pump headers, located at opposite ends of the motherboard.  Both the DDR4 slots, and the PCIe slots are protected by their Dual Armor system, consisting of an additional retention pin and a single piece of stainless steel to give the PCIe and DDR4 extra stength.  Plus for those that want to really monitor the temperatures, there are seven integrated thermal sensors, plus two external thermal sensors, which are provided.

The rear I/O cluster should be pretty familiar to you; there isn’t much here that is surprising anymore. On the left, we start with a combo PS/2 Keyboard/Mouse port, and two USB 3.1 Gen 1 ports (which are also the USB DAC ports).  Next is the MMCX Antenna connectors (2T2R), which is controlled by the Killer Wireless-AC 1535.  The video output connections are next, consisting of DisplayPort and HDMI 2.0.  Two more USB 3.1 Gen 1 ports are the next set of ports.  Followed by the first Killer E2500 Gigabit ethernet port, and a USB Type-C (Thunderbolt 3) port.  The second Killer E2500 Gigabit ethernet port, USB 3.1 Gen 1 (white USB port), and a USB 3.1 Gen 2 Type-A (red port) is next.  The final cluster is the typical audio cluster that includes one optical S/PDIF connector. 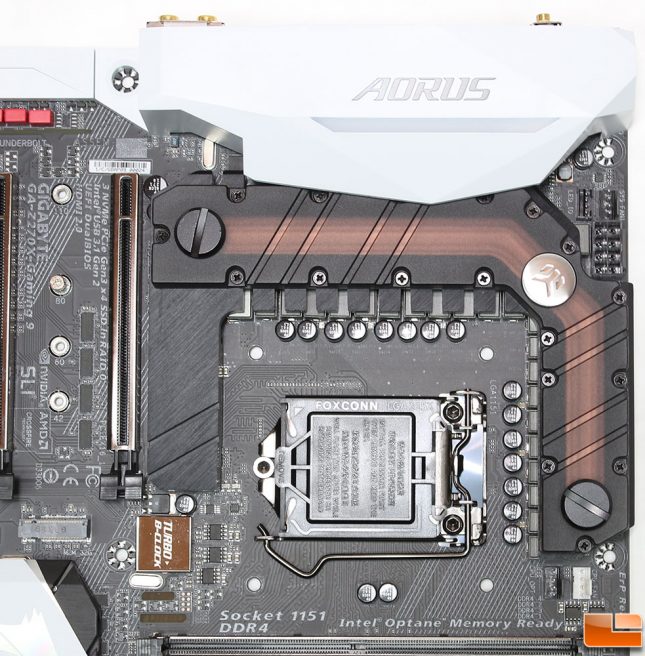 Wrapping around three sides of the CPU is the custom built EK designed G-Frost Hybrid Waterblock.  On the two ends are standard G1/4″ threaded fittings so you can add t his to your custom liquid cooling solution.  The top of the waterblock is translucent, allowing us to see through it to the copper plate.  The main portion of the waterblock covers the 22 phase digital VRM, but also reaches out through finger like add-ons to the Mosfets.  Even if you do not utilize the liquid cooling capabilities, the design of the waterblock will still cool the components just as good, if not slightly better than previous passive heatsinks.  Over by the 8-pin AUX power connector is a LED header for the rear I/O RGB LED plate. 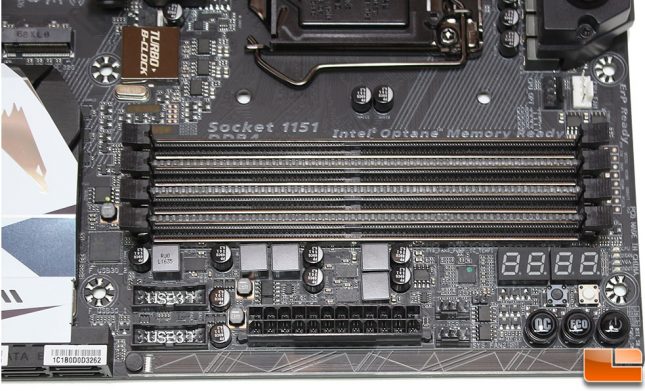 In the lower right section of the motherboard, we have many of the usual items, and several changes.  Along the bottom edge is a accent LED light strip, which has a removable acryllic cover, it uses simple push pins to secure it to the motherboard, one alternate strip is included, hopefully there will be after-market custom strips.  There are five buttons in the lower right corner which many enthusiasts find helpful when tinkering with settings.  An on-board power button, ECO mode, and OverClock mode buttons are large and easy to access.  The two smaller buttons are a Reset and Clear CMOS buttons.  Above the buttons are two debug LED readouts, and an additional four LED’s to the right that will point to an issue with the CPU, memory, GPU or BIOS.  Above those is the DDR4 slots with Steel Armor plating, these are capable of using memory up to 4000+MHz with XMP settings; between the DDR4 slots are LED light strips.  Finally, to the right of the DDR4 slots are some important voltage measurement points for those doing extreme overclocking. 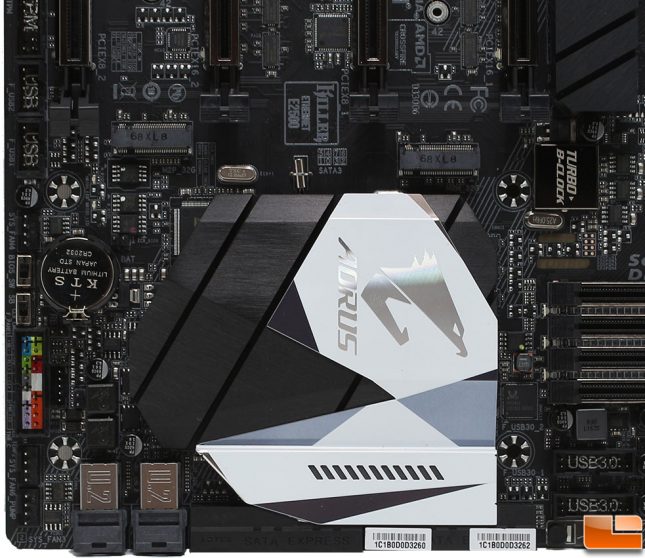 Moving to the bottom left portion of the motherboard, we find a large passive heatsink on the Z270 “Southbridge” chip.  I found the design of the heatsink and cover to provide a nice contast to the black PCB on the motherboard.  Along the bottom (in this picture anyways) edge are some LED’s that will light up with the motheboard; of course these are fully controllable with the other LEDs.  Along the “bottom” edge, we have the normal data connections, while the side has a wide range of headers.  Starting at the bottom, we have two fan headers, front panel header, BIOS switches, another fan header, and finally two USB 2.0 connectors. 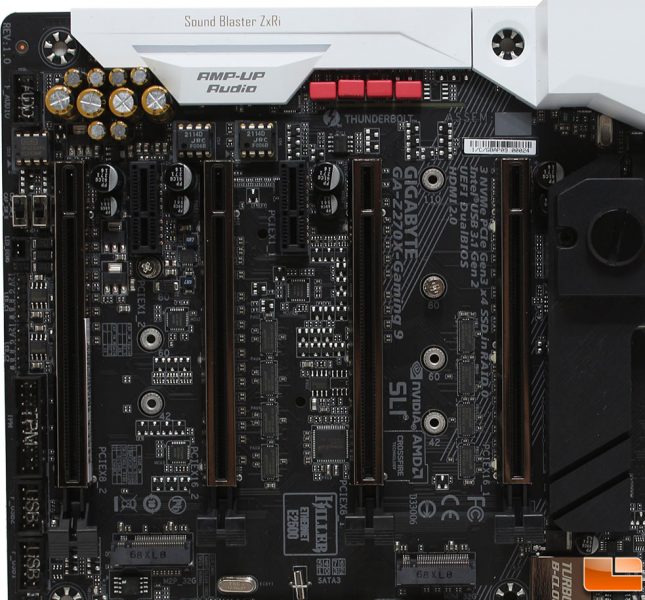 Turning our attention to the last section, which contain the PCIe expansion slots, we find there is a lot going on here.  There are four PCIe x16 slots, the first two run at x16, while the other two run at x8; all of the PCIe x16 slots conform to PCIe 3.0.  Tucked between the PCIe x16 slots are two PCIe x1 slots, these conform to PCIe 2.0.  Then we have two M.2 slots, both of them are Key-M, supporting both SATA and PCIe SSDs.  The first M.2 supports up to type 22110, while the second supports up to 2280.  Along the edge, we find several different headers.  At the corner, we start off with the front panel audio connector, then the audio gain control switches, the LED 5050 SMD RGBW strip headers, TPM and then the dual USB 2.0 connections.