Previous overclocking this hardware, we have seen the CPU overclock as high as 4.9GHz, but BSOD at 5.0GHz.  The Kingston Fury DDR4 memory kit, we have been able to get it to 2933MHz; any further and it would fail to POST. 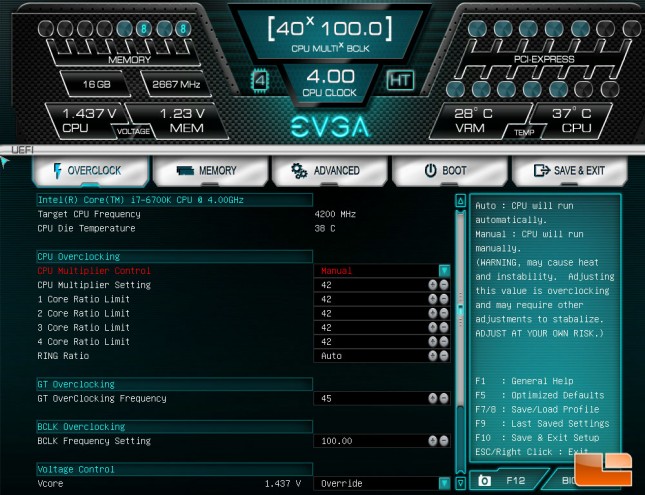 First, we’ll start with the CPU and see what we can do.  Utilizing the UEFI BIOS, we adjusted the CPU Multiplier Control to Manual, which then gives us options to adjust the multiplier.  We will start out at a modest 42, providing us a 4.2GHz overclock.  From there, we will run Cinebench R15, POV-RAY and 3DMark Ultra to check for stability.  Assuming it passes all three benchmarks, we will adjust the multiplier by 1, repeating the process until we get a failure.

Following that process, we were able to get the EVGA Z170 FTW and Intel i7 6700K up to a CPU Multiplier of 48 (4.8GHz) before we starting running into issues.  At 49 (4.9GHz) it would start to run the benchmarks and fail at various points.  We will keep the system running at 4.8GHz throughout all testing phases to verify stability. 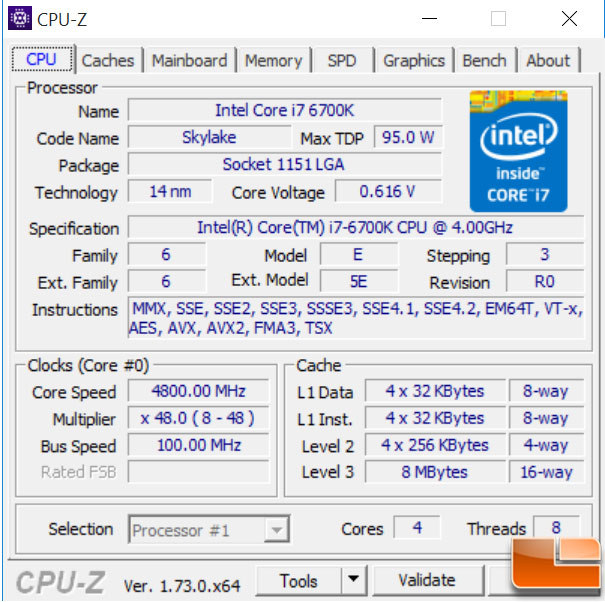 A couple of things to point out on the overclocking, there are no built-in overclocking profiles, you can save your own profile if you want though.   For somebody new to overclocking or not an expert at it, built-in profiles makes it easy for them to overclock.  In addition, the majority of the overclocking options are controlled either by a text entry or using the +/- keys, not a drop down to select from.

As for the memory, the Kingston Fury DDR4 kit has an XMP setting running it at 2666MHz, which is about average for DDR4 memory.  Previously 2933MHz has been possible, with failure to POST at 3000MHz.  Starting with 2900MHz, we ran the test system through the previous benchmarks, and increased the speed until we get a failure.  The EVGA Z170 FTW, successfully ran at 3000MHz, but failed at anything further. 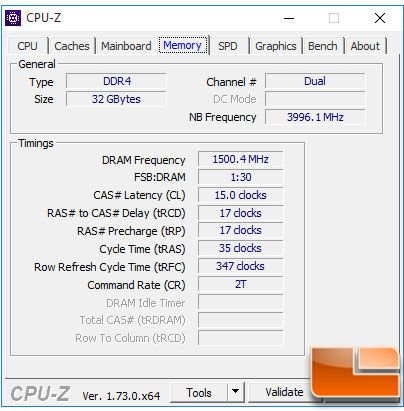 So let’s recap; previous maximum overclock of the test configuration was 4.9GHz for the CPU and 2933MHz for the DDR4 Kingston kit.  The EVGA Z170 FTW, we weren’t quite able to get to 4.9GHz, we had to setting for one notch down at 4.8GHz.  However, the Kingston kit was able to go a little higher to 3000MHz.  For all testing, these are the speeds which we will keep the test system running.