With our trusty P3 Kill-A-Watt meter we were able to monitor the power the test system was pulling at the wall.  We monitored the meter and made note of the lowest and highest readings throughout the entire testing phase. 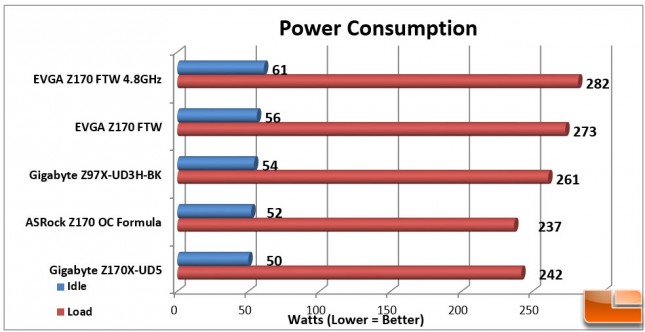 Legit Bottom Line:  At base clock speeds, the EVGA Z170 FTW was pulling 6W more power than the lowest power hungry Z170 test system.  While that is a small amount, it can add up over time if you leave your system on full time.  Under a load though, that jumped to 36W more than the lowest full load result.  Not surprisingly, once we overclocked the EVGA Z170 FTW power usage went up, but not by a huge amount, idle went up 5W, while the load usage went up 9W.

With the testing environment kept at a constant 72F (22.2C), we used HardwareMonitor to analyze the CPU temperature for each of the test systems. 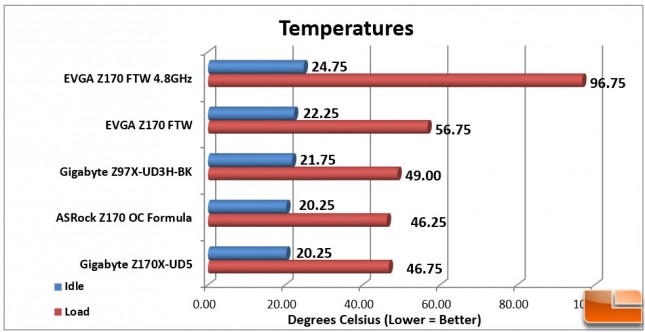 Legit Bottom Line:  The EVGA Z170 FTW processor temperature was the warmest at all phases of testing.  What surprised me was the increase in temperature when the system was under a  heavy load, usually a few degrees difference isn’t an issue; there was a 10C difference between the three Z170 systems.  Of course when overclocked, both the idle and load temperature will increase, the Intel i7-6700K was running dangerously hot at 96.75C when overclocked to 4.8GHz, I wouldn’t recommend running a normal system for long at this temperature.