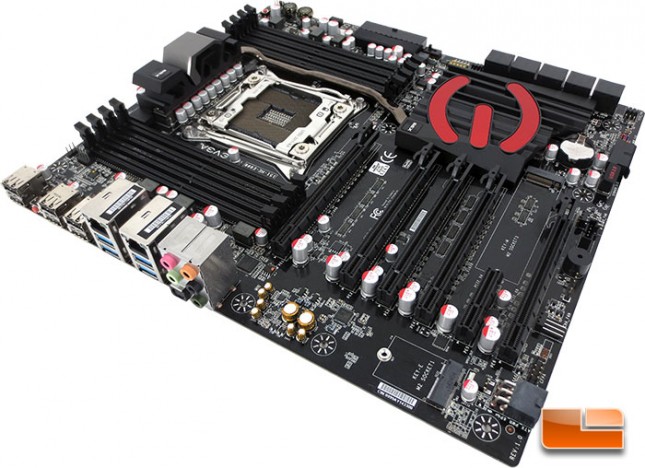 The EVGA X99 Classified isn’t geared for the casual overclockers, it’s built for those that want to push the Intel core i7-5960X to the extreme speeds using liquid nitrogen and other sub-ambient cooling methods. The EVGA X99 Classified features a pair of 8-Pin CPU power plugs that are capable of pushing up to 600 Watts of power to the Intel Extreme processor. Between the pair of 8-pin plugs and the processor is a digital VRM system that features a highly efficient 10-phase design. In order to facilitate as much power being transferred to the CPU as possible with as little resistance as possible, EVGA filled the LGA2011-3 socket with 1.5 times the amount of gold.

In addition to the features mentioned above, the EVGA X99 Classified is using an 8 layer PCB to improve the system stability while overclocking and improve the PCB cooling. EVGA has revamped their UEFI BIOS and given them a new look an focused on the functionality of them. The features don’t stop there, and we will be looking at many of them as we go through the review today, so without further ado let’s take a look at the EVGA X99 Classified specifications and then we can move on to the good stuff!