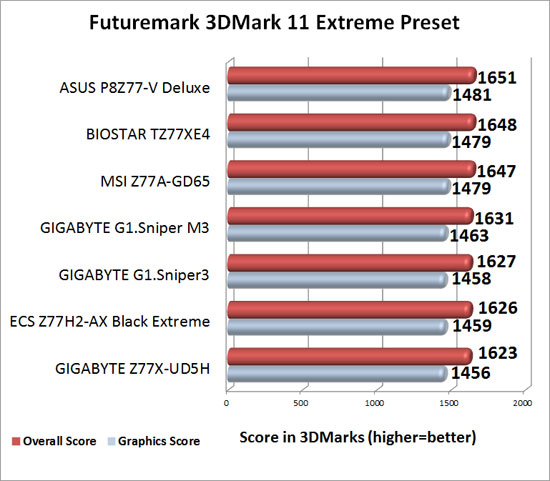 Benchmark Results: The ECS Z77H2-AX Black Extreme performance in the 3DMark 11 Extreme preset wasn’t the fastest we have seen, though it still held a respectable overall score of 1626 3DMarks. The ECS Z77H2-AX Black Extreme was 25 points behind the top performing ASUS P8Z77-V Deluxe which holds a score of 1651 3DMarks, and only 3 points ahead of the GIGABYTE Z77X-UD5H which fills in the bottom spot of the chart with a score of 1623 3DMarks. 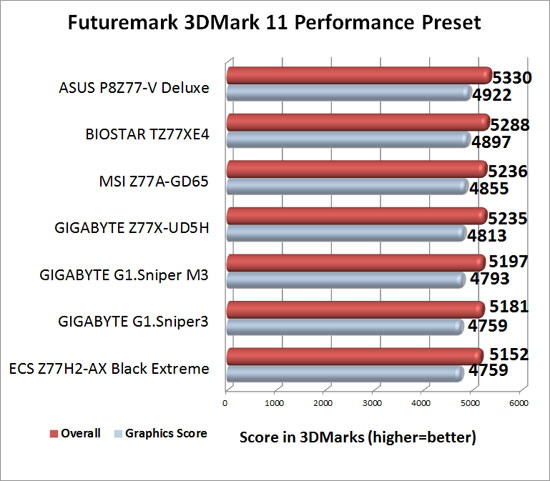 Benchmark results: Looking at the results from the performance preset in FutureMark 3DMark 11, the ECS Z77H2-AX Black Extreme dropped into the bottom spot of our charts. The Z77H2-AX pulled an overall score of 5152 3DMarks while the next board was 29 points faster. Comparing the ECS Z77H2-AX to the ASUS P8Z77-V Deluxe which holds the top spot with 5330 3DMarks, the Z77H2-AX was 178 3DMarks behind, or a little more than 3%.