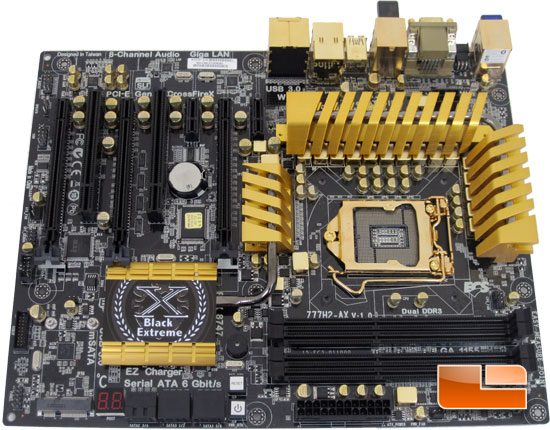 The ECS Z77H2-AX Black Extreme ‘Golden Board’ is definitely named appropriately. It is adorned with golden parts all across it. When I first saw it, I wasn’t to sure about it. After using it for a couple of weeks and becoming accustomed to it I really like the contrast that the gold creates against the black PCB. Does it sell me on the board? Not at all, performance will always take the drivers seat to looks. Though a sharp looking board never hurts. 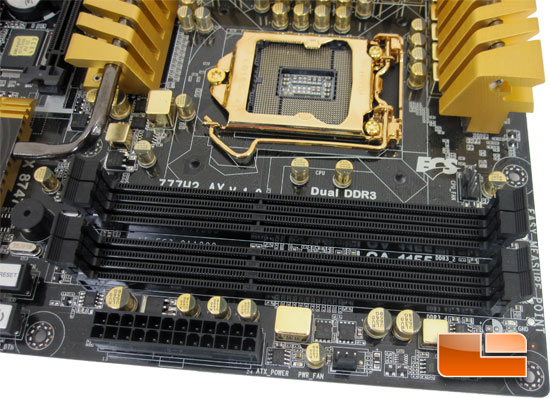 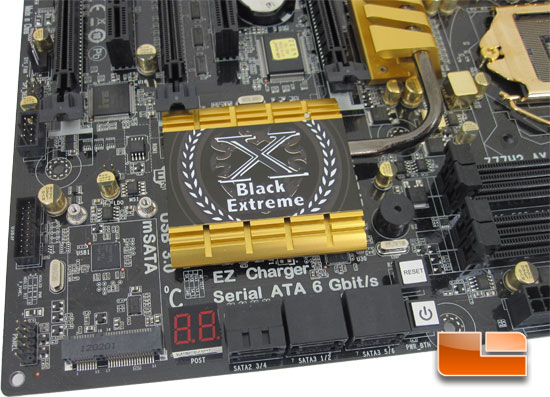 Rotating the ECS Z77H2-AX Black Extreme ‘Golden Board’ around, there are a few things here that are worth mentioning. Starting along the right side of the SATA ports, we have the onboard power and reset buttons. While it may look like they will be covered by a long graphics card, I can assure you that they are not. They sit just on the back of the card. While it may not be the most convenient spot when working on an open bench like we use in the Legit Reviews Labs, it is probably one of the best spots on the board when mounted inside a case. The buttons will be easy to get to if you need to. The ECS Z77H2-AX Black Extreme features six SATA ports, two SATA 2 3Gbps ports controlled by the Intel Z77 chipset, two SATA III 6Gbps ports controlled by the Intel Z77 chipset, and 2 SATA III 6Gbps ports controlled by an ASMedia ASM1061. The ASMedia ASM1061 also controls the pair of eSATA 3 Ports on the I/O panel. To the left of the SATA ports is the debug LED followed by a mSATA port. The mSATA port is great if you plan on taking advantage of the Intel Smart Response Technology, mSATA drives can be picked up for as little as $66.96 with free shipping for an OCZ 30Gb SSD. This will help boost up the system responsiveness, without the high cost of an SSD. Working our way up the edge of the ECS Z77H2-AX Black Extreme, we can see the front panel header, internal SuperSpeed USB 3.0 controlled by the Texas Instruments TUSB7320. Above the USB 3.0 header, we can find an internal header for USB 2.0. 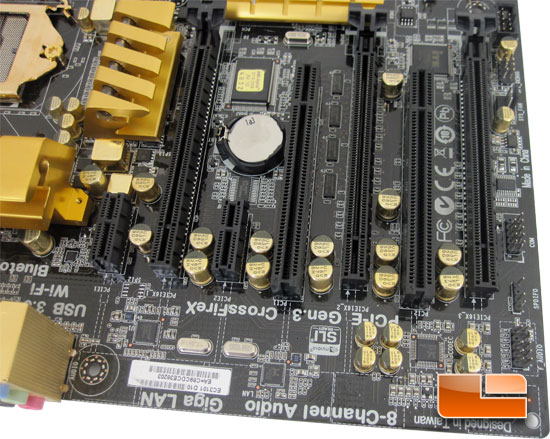 The ECS Z77H2-AX Black Extreme ‘Golden Board will support up to three way AMD CrossFireX and NVIDIA SLI technologies. In addition to the three PCIe X16 Gen 3 slots, there is a pair of PCIe x1 slots and a pair of legacy PCI slots. Working our eyes down the edge of the board, we can see the SPI_Debug header, a 3pin system fan header, serial port header, internal SPDIF out, and the front panel audio. Between the group of solid capacitors we can find the Realtek ALC892 High Definition audio codec. Our next IC is the Realtek RTL8111E Gigabit LAN controller, followed by the ASMedia ASM1061 SATA III 6Gbps controller. 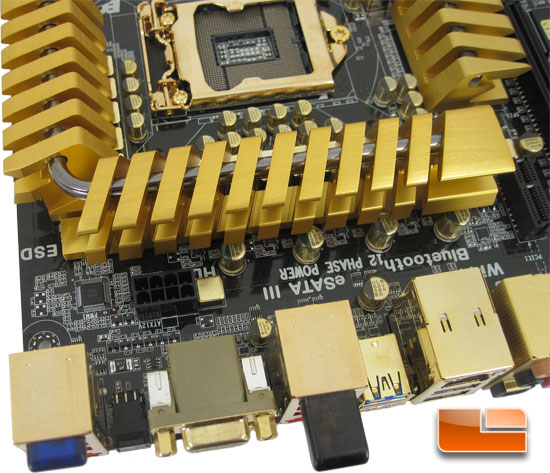 Taking a look at the I/O panel and heatsink assembly from the top, we can see the gold parts really stand out and look good against the black PCB.

The I/O panel for the ECS Z77H2-AX Black Extreme has just about everything you could need. There is a total of eight USB ports, four USB 2.0 and four USB 3.0, Gigabit LAN, HDMI, Bluetooth, Wireless N WiFi, optical audio out, five audio out jacks, clear CMOS button, and a VGA DSub port.