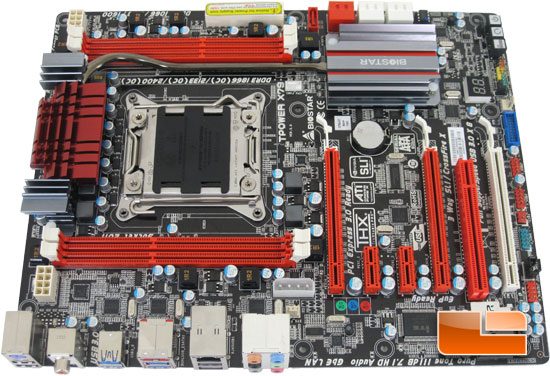 Many of the boards that we have looked at recently have gone to a blacked out look, while it looks good, everyone is doing it. The BIOSTAR TPower X79 didn’t follow the mold, they used a black PCB, and accented it with red and white expansion slots and DIMM slot. The BIOSTAR TPower X79 will add a little bit of color to the inside of your case and look great if you show off your hardware through a window in the side panel. 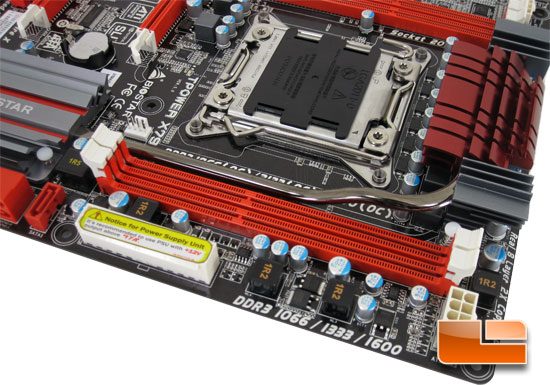 Taking a closer look at the first corner of the BIOSTAR TPower X79 we can spot two of the four DIMM slots. The BIOSTAR TPower will support a maximum of 32GB of memory running at 2400MHz! At the corner we can see one of the 8pin CPU power connectors and just below the DIMM slots we can see the 24pin motherboard power. The sticker on the 24pin motherboard power reads: ‘Notice for Power Supply Unit – It’s recommended to use PSU with +12 output above ’17A’. Just above the left hand side of the DIMM slots we have a 4pin fan header. This is actually the CPU fan header. When setting up the BIOSTAR TPower X79 we were looking for the CPU fan header along the edge where we normally find it, it through us off being where it’s at. It’s not a bad place for it, just different. 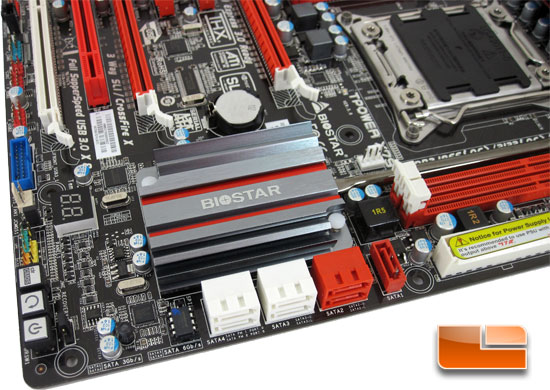 The BIOSTAR TPower X79 features a total of 7 SATA ports. The three red SATA ports are SATA 2 3Gbps while the four white SATA ports are SATA III 6Gbps. The pair on the left is controlled by an ASMedia ASM1061 SATA III controller, the pair in the center are the SATA III 6Gbps controlled by the Intel X79 chipset. Moving our eyes to the edge of the BIOSTAR TPower X79 we can spot the rapid switches. The Rapid Switches include power, reset, and a clear CMOS switch. Moving up we can see a technicolor pin out, that is for the front panel buttons and LED’s. Following the front panel header we have a jumper for clearing the CMOS, a 3pin system fan, and an internal SuperSpeed 3.0 header. Next to the clear CMOS jumper we have the Rapid Debug 3, this will display the system post codes as the BIOSTAR TPower X79 boots, and will display the CPU temperature once the system has completed the boot sequence. 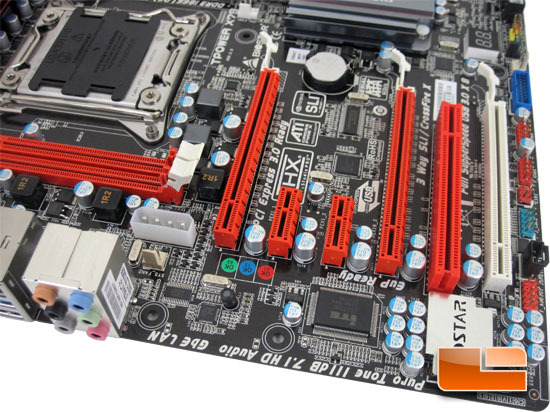 Spinning the BIOSTAR TPower X79 around we can pick up where we left off above. Beyond the USB 3.0 header we have a pair of internal USB 2.0 headers, a consumer infrared header, serial port header, SPDIF out, and the front panel audio header. The BIOSTAR TPower X79 features three PCIe x16 slots, two PCIe x1 slots, and a single PCI slot. Just in front of the PCI slot we can see that one of the integrated chips is covered by a BIOSTAR shield, below the shield is the Realteck ALC898 8 channel blu-ray audio codec. We also have the ITE IT8728F, and the Realtek RTL8111E Gigabit Ethernet controller. To the left of the expansion slots we have a four pin molex power connector to supply extra juice to the PCIe slots when running multiple graphics cards. Below the molex connector we have a 3pin system fan header. 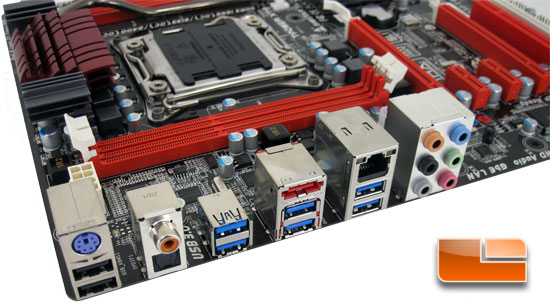 The I/O panel on the BIOSTAR TPower X79 features eight USB ports, three of which are SuperSpeed USB 3.0 and two of which are USB 2.0. The USB 2.0 ports would be the best ones to use when connecting a keyboard and mouse. Just above the USB 2 ports is a single PS/2 port for a keyboard. To the right of the PS/2 port we have the coaxial and optical SPDIF out ports. There is also a single eSATA 3Gbps port, and a RJ45 Gigabit Ethernet port controlled by the Realtek RTL8111E mentioned above. 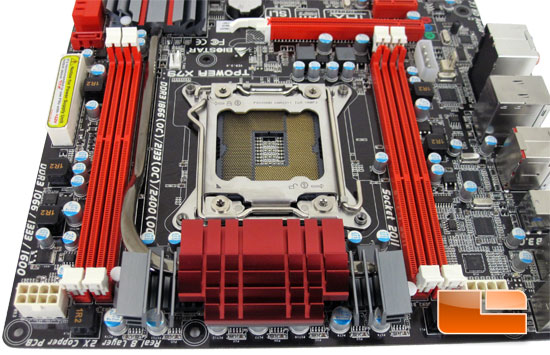 The BIOSTAR TPower X79 offers two 8pin CPU power plugs. It’s a nice feature when performing extreme overclocking, I’m not sure why they separated them so much on the board. Most of the time we see them right next to each other. Side by side offers up a little bit better cable management. It’s not a fault of BIOSTAR, but the split DIMM slots does cause a memory clearance issue with tall DIMMS and CPU coolers like the Corsair A70 that we use for testing. On all of the boards that we have tested that feature only four DIMM slots we have had to use a set of Corsair Vengeance with the heat spreaders removed.