We have had the opportunity to play with the BIOSTAR TPower X79 motherboard for few weeks now. Truth be told, it’s been a great board. It is packed with the features most people need, plenty of SuperSpeed USB 3.0 eight of them in fact (6 on the I/O panel, 2 through an internal USB 3.0 header), enough expansion slots to run either 3-way NVIDIA SLI or 3-way AMD CrossFireX. About the only thing that’s missing is FireWire, and not many people use that anymore so I won’t hold it against them. Leaving IEEE1394a (Firewire) out helps keep the cost down and that is what BIOSTAR is good at. They keep their price points low for those of us on a budget. As I’m writing this the BIOSTAR TPower X79 is currently retailing for only $214.99 after rebate! That is by far the lowest cost Intel X79 motherboard we have had the chance to look at.

One area that BIOSTAR made a great move, was in their selection of SuperSpeed USB 3.0 controller. Since we have started looking at Intel X79 motherboards they have all come with Texas Instrument TUSB7340 controllers, Fresco FL1009 controllers, or ASMedia ASM1042 USB 3.0 controllers. The ASMedia ASM1042 has been the reigning champion in our SuperSpeed USB 3.0 testing. The fine gentlemen at BIOSTAR opted to use the ASMedia ASM1042 USB 3.0 controller and the BIOSTAR TPower X79 was able to outperform all of our Intel X79 systems with the exception of the ASUS R4E which it was right on par with. When I say outperform, I’m not talking 1-2MB/s. In HD Tune 4.61 the next closest average read speed was ~31MB/s behind the BIOSTAR TPower X79! The next closest average read was ~44MB/s behind the TPower X79! If you are looking for a board with superb SuperSpeed USB 3.0 performance at a great price point, then look no further.

Throughout the testing I was definitely happy with the performance level considering the price of the BIOSTAR TPower X79. I was however a little disappointed with the overclocking. We were able to hit 4.4GHz without adjusting anything but the multiplier within the BIOS. This gave me high hopes for what we could do with our Intel Core i7-3960X Extreme processor! Unfortunately, that was nearly the limit of the BIOSTAR TPower X79. Even increasing the BIOSTAR TPower X79 VCore voltage to 1.5V we weren’t able to get anything over 4.5GHz stable. We have had our 3960X up to 4.9GHz so we know it’s capable, but we just couldn’t get there today. Once again it comes back to how fast do you want to go and how much do you want to spend? The ASUS Rampage IV Extreme which is the only board to hit the 4.9GHz mark retails for $439.99 plus shipping, which is more than double the cost of the BIOSTAR TPower X79. So I’m not to horribly surprised that we didn’t hit the same overclock levels, but I was hoping. 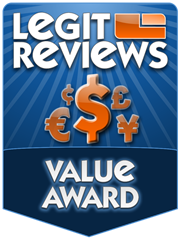