We first noticed the ASUS ROG Zephyrus G14 during CES 2020 as it claimed to be the world’s most powerful 14-inch Windows 10 Pro gaming laptop. Our inner geek really wanted to try out the AMD Ryzen 9 4900HS 8-core, 16-thread processor that has been paired with the NVIDIA GeForce RTX 2060 Max-Q graphics card. Other goodies include 16GB of DDR4 3200MHz memory, a 1TB M.2 PCIe NVMe SSD, Gig+ Wi-Fi 6 (802.11ax), USB Type Type-C ports and 1080P Full HD 120Hz PANTONE validated IPS-Type display. This combination should be able to churn through everyday multitasking and gaming with ease. Best of all, the price for this new breed of thin and light gaming notebook is just $1,449.99!

The bad news is that the ASUS ROG Zephyrus G14 is sold out pretty much everywhere right now, so you might have to wait a bit to get your hands on this sleek 14-inch, sub-20mm class notebook. There are multiple models of this gaming laptop and you can find one for under $1450 if you are okay with a different class processor and a GeForce GTX 16-series GPU. The model that we were sent to review was one of the higher-end configurations that can be purchased. 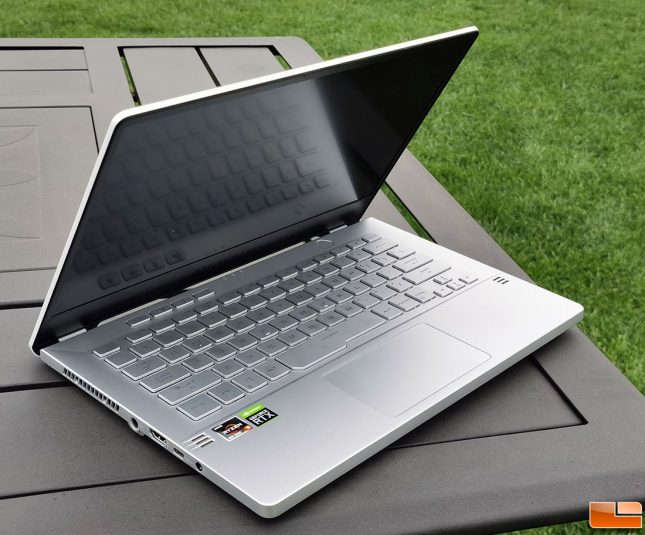 The ROG Zephyrus G14 measures 12.8 x 8.7 x .7 (32.4 x 22.2 x 1.79cm) and weighs 3.52 lbs, which is considered an ultraportable form-factor laptop. The visual appearance of the Zephyrus G14 is pleasing with the gray body and white top lid cover. Audio quality is solid thanks to four speakers that are able to fill a moderately sized room with Dolby Atmos three-dimensional sound. Two of the speakers are located below the keyboard on each side and another two are located on the bottom front edge.

Opening the lid of the Zephyrus G14 beyond 90 degrees will put the lid in contact with the surface and lift the back of the notebook up by 1.5cm. ASUS designed it like this to improve system cooling and calls the feature ErgoLift. 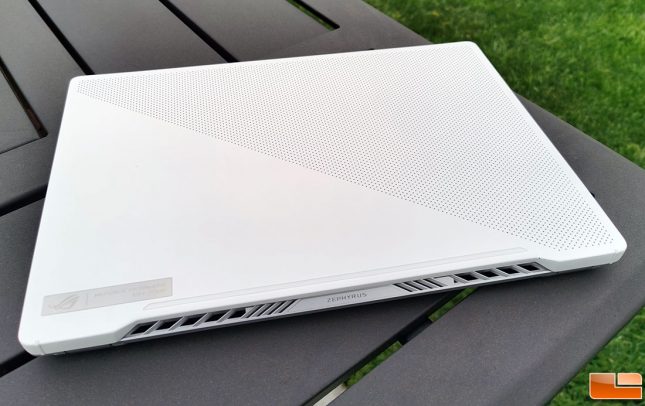 When we first got the Zephyrus G14 laptop we thought that it supported AniMe Matrix display lighting, but we quickly found out that not all ASUS GA401 series products come with AniMe Matrix Display support. The exact model that we are testing is the GA401IV.

The keyboard layout doesn’t take too long to get used accustomed to, but they key spacing is a bit wider than the notebooks we normally use. The top four buttons are great for gamers as it allows you to quickly adjust the system volume, mute the microphone and quickly launch ASUS ROG Armory Crate. Armory Crate gives you an incredible amount of system information and even allows you to change system performance modes. 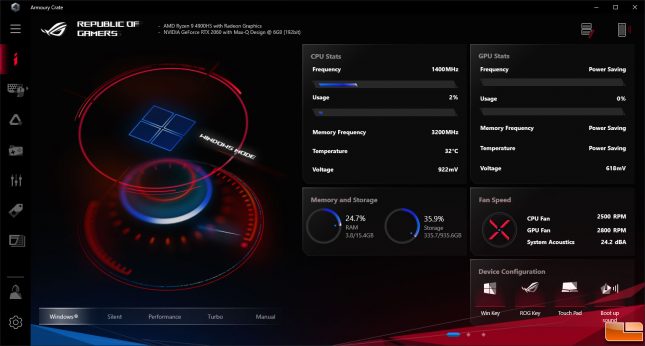 The power button is also easy to find thanks to being located on the top right corner above the keyboard. The power button features a built-in fingerprint sensor that seems to work good enough. The touch pad is centered to laptop and slightly offset to the space bar. We had zero issues adjusting to this touch-pad and it worked extremely well with gestures and clicks. The keyboard has minimum flex unless you really press down hard and the touch-pad was very responsive.

On the right side of the Zephyrus G14 youll find a USB-C port, two USB 3.2 Gen 1 Type-A ports, and a Kensington lock for those want theft protection.

On the left side of the G14 you’ll find a rather large barrel-type battery charging power port, an HDMI output, a USB 3.2 Gen 2 Type-C port with DisplayPort 1.4 and power delivery, and lastly a 3.5mm audio jack.

The only ports that are ‘missing’ would be the RG45 LAN port for those that prefer hard wired gaming experiences and an SD memory card reader slot. ASUS opted not to include either of those on this laptop, but you can buy a USB adapter that includes both of those options if they are needed. Internet connectivity is solved by the Intel Gig+ 802.11ax Wi-Fi 6 solution that also features Bluetooth 5.0 support. 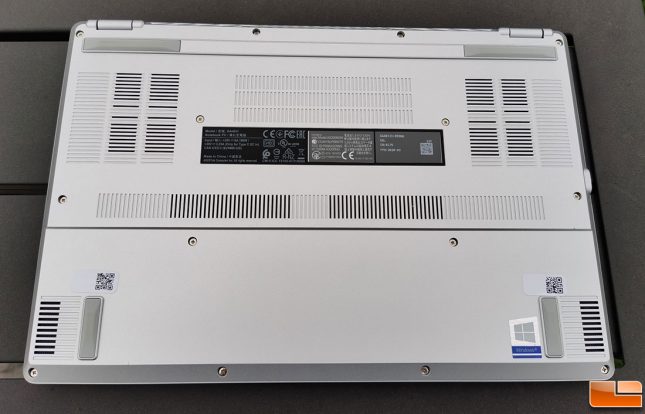 On the bottom of the Zephyrus G14 you’ll discover four large rubber anti-skid foot pads and a number of air vents that you won’t want to block. There are 14 visible Philips head screws that hold back panel on, so getting inside shouldn’t be too tough if one wants to replace the DRAM or something later on.

Let’s start looking at the performance numbers from the G14!