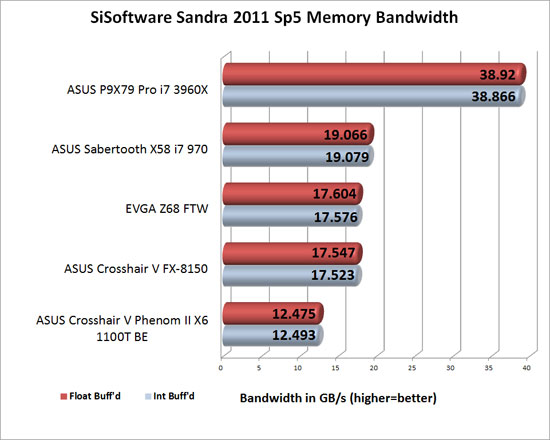 Results: The ASUS P9X79 Pro is the clear victor in the SiSoftware Sandra Sp5 Memory benchmark. Thanks to the Quad-channel memory the ASUS P9X79 Pro has more than double the performance of the nearest system! The Float B/F AVX/128 memory bandwidth of the P9X79 Pro was an impressive 38.92GB/s. The ASUS Sabertooth X58 with our Intel Core i7 970 hex core processor had a bandwidth of 19.066GB/s. Now granted, the first generation of Intel Core i7 hex core processors isn’t known for their memory bandwidth. If we were using a Core i7 quad core processor like the i7 950 we used in the ASUS Sabertooth X58 review we would probably see around 27GB/s with the triple channel memory, but it still doesn’t hold a candle to the ASUS P9X79 Pro with quad channel memory.