The AMD Radeon VII 16GB graphics card offers better performance than the last generations Radeon RX Vega 64 air cooled card. That is to be expected though with any new generation of graphics card and the fact that the price is higher. AMD launched the Radeon RX Vega 64 air cooled models at $499 and called it the ‘GPU King Under $500’ when it launched. The Radeon VII is coming out at $699, which is $200 higher than AMD’s last flagship model. The main competitors for this card would be the NVIDIA GeForce RTX 2070 and RTX 2080 models that are in-stock and available from Amazon for $499.99 and $699.99, respectively. And to be fair the gaming performance of the Radeon VII is usually pretty damn close to the RTX 2080 on most game titles. When it comes to raw compute performance the Radeon VII is a beast with double-precision performance unlike any other consumer desktop graphics card on the market today. The AMD Radeon VII is hands down the card to get if you do compute workloads where double-precision is used.

The area where the AMD Radeon VII falls short is on power efficiency, noise levels and overclocking. It honestly feels like AMD was a bit too generous with the GPU voltage on the Radeon VII as evident when we undervolted the GPU. We were able to drop the power down 135mV and that dropped the power consumption on our card by roughly 70 Watts. That is a massive difference and the card was still perfectly stable. Maybe not all of the new Vega 7nm GPUs can run that low and that is why AMD kept the power up, but undervolting this card resulted in big changes. The fan noise on the Radeon VII is louder that we expected, but with a little undervolting and fan curve tuning the Radeon VII is even more impressive. Hopefully AMD can shed more light on this in the future as it feels like there is an opportunity for AMD here. The Radeon VII might not be an overclocking beast, but undervolting and making it more efficient is just as fun.

We should also mention that AMD is currently including three AAA games with the Radeon VII while supplies last. Those game titles in that bundle are Tom Clancy’s The Division 2, Devil May Cry 5, and Resident Evil 2. Supplies will be tight at launch as not all of AMD’s partners were able to get cards to the retail channel today. 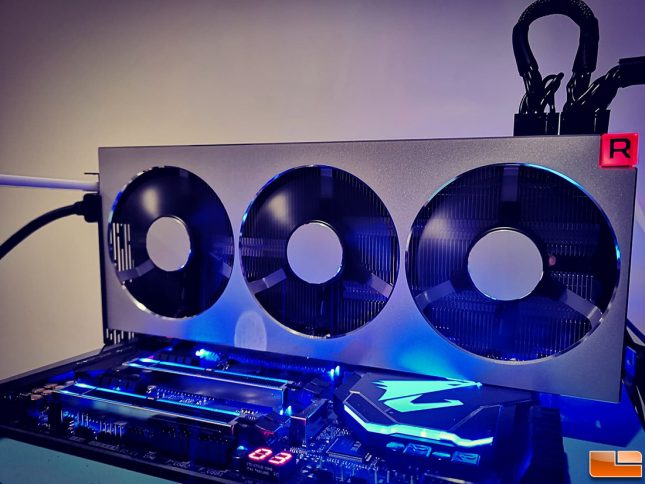 At the end of the day the AMD Radeon VII shows that AMD is still trying to be competitive in the high-end gaming market and this card blows away Radeon RX Vega 64. AMD needed a big performance boost to catch up and we were consistently seeing over 30% performance gains form Radeon VII. This is great news for Radeon fans that have been waiting for something faster to come out.

Legit Bottom Line: The AMD Radeon VII doesn’t top the GeForce RTX 2080 Ti from NVIDIA, but it offers improvements in all areas over Radeon RX Vega 64!