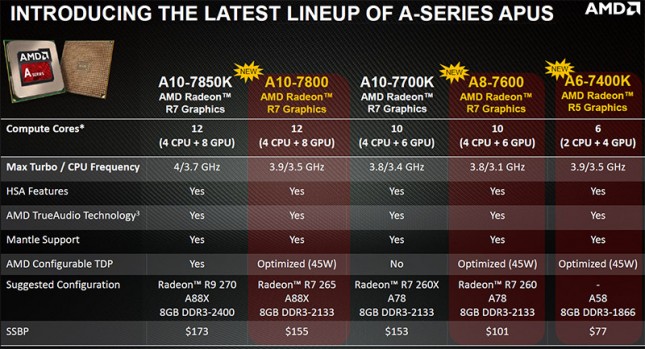 AMD originally announced the 4th Generation A-Series of APUs in January 2014, but for some reason they didn’t sample many sites with the AMD A10-7850K and the AMD A10-7700K APUs. We asked for samples, but we were told that they were out of them. We were able to get our hands on the A8-7600 many months ago, but didn’t see a point in reviewing it half a year before they would be available to purchase. We aren’t sure what took AMD half a year to bring the additional Kaveri lineup to market, but they are finally here. Is it six months too late? We’ll let you be the judge of that.

The overall performance of the AMD A10-7800 and A8-7600 APU is decent and the AMD A88X FM2+ platform that we tested on was robust and solid. The AMD A10-7800 and A8-7600 were a but underwhelming on the CPU side of things, but we found the GPU to be very good. AMD suffering on the CPU side and excelling on the GPU side. That story might should familiar to some as that is how most AMD processor reviews have gone for some time. Applications that are able to use OpenCL or HSA feel quick and snappy, but applications accelerated by other means could always use more processor power. Maybe AMD will help close the CPU performance gap with the Excavator microarchitecture that will be used on the 5th Generation A-Series APU called Carizzo that comes out in 2015.

We were very shocked hardly what we would consider a significant difference between the the AMD A10-7800 and A8-7600 in many of the benchmarks. In Handbrake we found the A10-7800 to be 0.3 FPS or 1.8% faster on average in our video transcoding task. That is far from a significant difference and a hard pill to swallow when you consider the price difference. AMD has the the A10-7800 priced at $155, which is $54 or 53% more than the A8-7600 at $101. Between the two processors and what we’ve seen today we’d have to say that the AMD A8-7600 offers more bang for the buck. The AMD A10-7800 would be recommended though if you plan on doing gaming or GPGPU computing as those two extra GPU cores do come in handy at times.

There is a launch promotion that AMD also announced today for the AMD A10 APU series that is worth noting. If you purchase an AMD A10 APU you’ll get the ability to get a free game key for one of three game titles. You have a choice between Thief, Sniper Elite III and Murdered Soul Suspect. 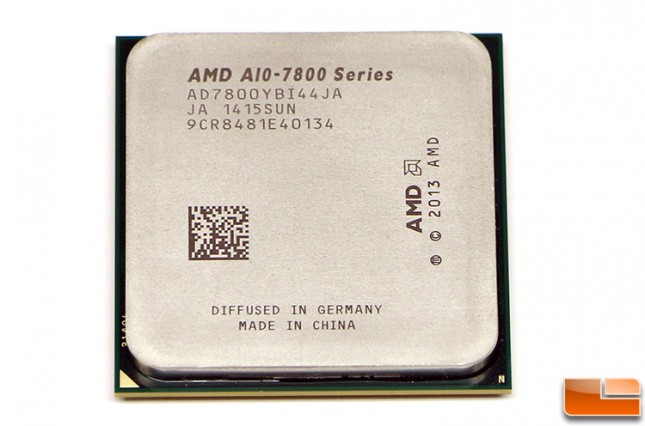 Legit Bottom Line: At the end of the day the AMD A-Series of APUs are aimed ad the low-end of the mainstream consumer market and they are decent processors. We aren’t sure what took AMD so long to bring them to market, but they are finally here and ready to power your next build!