Simply put, the x264 HD Benchmark is a reproducible measure of how fast your machine can
encode a short HD-quality video clip into a high quality x264 video
file. It’s nice because everyone running it will use the same video clip
and software. The video encoder (x264.exe) reports a fairly accurate
internal benchmark (in frames per second) for each pass of the video
encode and it also uses multi-core processors very efficiently. All
these factors make this an ideal benchmark to compare different
processors and systems to each other. We are using x264 HD v5.0.1 for this test.

This application did fairly well when run on 12 threads, as you can
see from the screen shot above. The first pass was not using all of the processing power available on the cores, but on the second pass all 12 threads were at
~95% load. 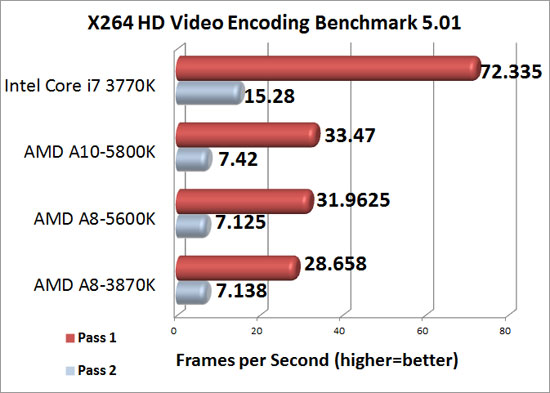