120mm Water Cooler Round Up Part 2 – Looking Inside 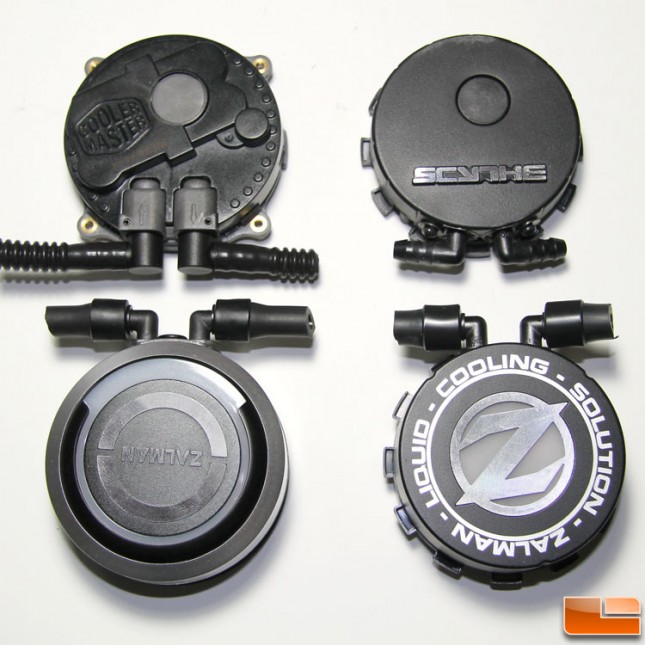 For a while I have wanted to tear some of these closed CPU loop water cooling units apart just for sheer curiosity on my part. Way back when the first Corsair H50 came to us we took one apart just because it was new. Since then several generations of Asetek coolers have come to the market. The Scythe and the Zalman LQ315 are two confirmed Asetek units of later generations due to them having Asetek branded hardware and the lug mounting system that Asetek has had since the first generation of their coolers.

The Cooler Master and the Zalman Resorator Max are two that are close to Asetek designs internally, but mounting system, coolant, and radiators are not. Now I do not claim to understand patents, but with what I have seen in my tear down of these coolers I can understand how Asetek claimed in 2012 that competitors were ripping off their designs. The Cooler Master Sedion 120M and Zalman Reserator 3 Max are very similar to the Asetek designs and many of the parts were found to be interchangeable. This could be a coincidence, but then again Asetek has already taken action against Cooler Master for patent infringement and companies like Swiftech had to pull the H220 CPU cooling kit from the market. This patent battle has clearly been going on for some time and will eventually worked out. 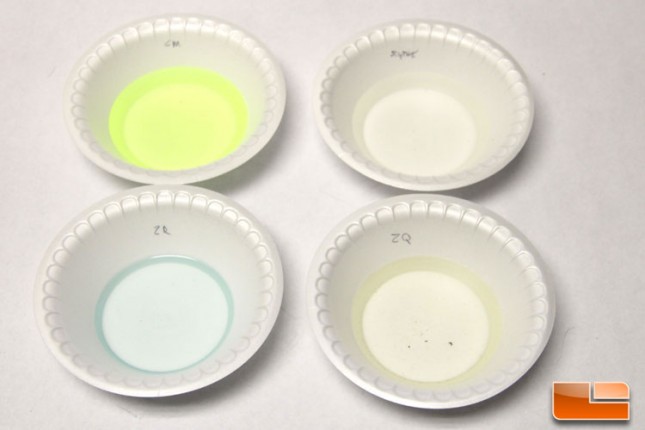 As for the units themselves, I found it fascinating how little coolant there is in them, a cup or less. The Cooler Master and Zalman Resorator Max had dye in their coolants. From what I have seen from custom loops with dyed coolant, over time those loops can get gummed up from the dye, which leads to less performance. I personally have only run water in my custom loops due to horror stories I have seen, so I cannot say with certainty if the dyes are the issue. With the Resorator Maxs cold plate already showing signs of staining, the stories may very well be valid and have reservations about the performance after long term use. The other thing that I found counter to custom loop designs is the small diameter of the tubing used. Where custom loop builders tend to go for and ID tubing, all the AIO units run ID tubing.

The cooling performance between the true Asetek designs and those that appear to similar are virtually identical. That means when it comes to performance it doesn’t look like enthusiasts are really better off going with one version versus the other. The only question that is left is reliability and lifespan and that is one area that was not looked at by us or any reviewer that we have seen. Water cooling is still our preferred method of keeping processors cool!

The Legit Bottom Line: If closed loop water coolers have always looked similar to you despite having different designs, now you know why. How does the old saying go.. Imitation is the sincerest form of flattery