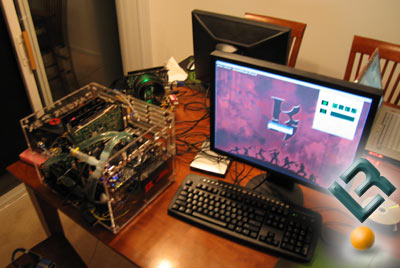 Only after recording ping times for a couple hours with and without the Killer NIC installed could we see the difference on GRAW. The 3ms difference was seen on a server that we pinged 103ms to normally. Is that worth $180? To us the answer is no, but at least we got together and had a good time gaming and hanging out!

Our test experience with the Killer NIC wasn’t without problems though. On our Windows Vista Ultimate 32-bit test system the Killer NIC sometimes would not be detected even though it was installed.

We had to uninstall the card and re-install it for it to again be detected, which was strange to say the least. Here is a badly lighted picture that shows the card installed, but Vista says it’s not present. When the system posted the LED lights on the Killer NIC would blink, but after that there would be no Ethernet activity lights or anything.

We also experienced problems with the drivers when removing the Killer NIC on our Windows XP Professional test system. After the card was removed and the system was turned back on the driver was trying to detect the Killer NIC and after about a minute the machine would just reboot. The driver couldn’t be removed in safe mode as it wouldn’t activate the installer, so we had to enter MSconfig and uncheck the Killer NIC to get the system up and running back on the integrated network controller.

All said and done the Killer NIC and Killer K1 have the making to be a good product if, and only if, Bigfoot Netowrks is able to get a bigger performance improvement with them. For a price tag of $180-$250 the vast majority of gamers would be better off upgrading their graphcis card, processor or adding additional memory that will help improve gaming performance by more than a couple percent here and there. If you really want to improve you ping time take the price of the $250 Killer NIC and upgrade your DSL or cable line to the next level up! The $250 Killer NIC will free up $20.83 a month for a year, which might just be enough to get a faster internet package!

Legit Bottom Line: The benchmarks show that the Killer NIC and Killer K1 were able to lower ping times and improve frame rates, but none of our testers could tell when the card was or wasn’t installed in our test system.