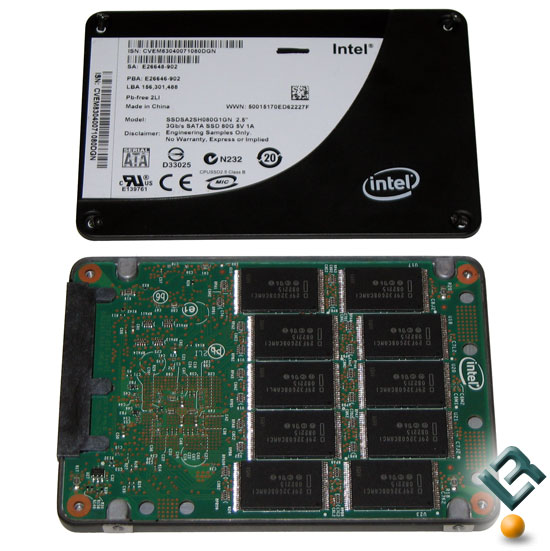 Since this is our first time I have seen an Intel X25-M SSD, I just had to take it apart. The label located on the cover of the X25-M lists the model number of SSDSA2SH080G1GN and it’s described as a 2.5″, 3GB/s SATA SSD 80GB, 5V, 1A. The label also informs us that the drive is an engineering sample that is Pb-free (lead free, RoHS compliant) and made in China. Removing the four Philips screws located on the corners of the top cover the inside of the drive can be accessed. With the cover removed we see a total of ten Intel NAND Flash memory chips, but that is just this side of the drive. 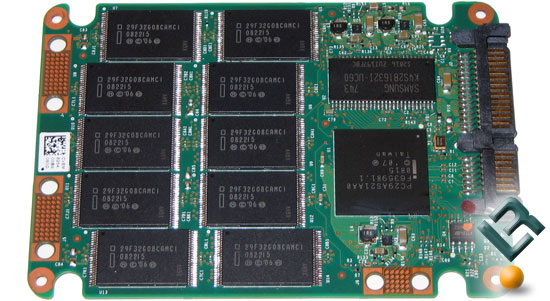 Removing the drive from the housing and flipping it over we can take a look at the interesting part. Again, I found ten more Intel NAND Flash chips, an Intel branded controller and a single Samsung DRAM chip. The lone Samsung DRAM IC is used as a cache buffer for the flash memory controller ASIC from what I was told by an Intel fellow. 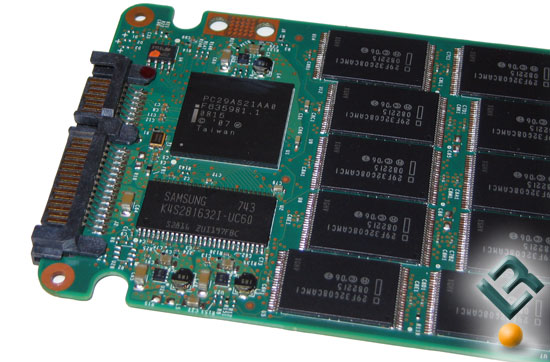 Here is a closer look at some of the chips on the Intel X25-M 80GB Solid State Drive. All 20 of the Intel NAND Flash chips are used in conjunction with a wear-leveling algorithm that Intel developed to make sure that the erase/re-write cycle is spread across all of the memory ICs. If a sector ever goes bad the data won’t be lost, it just can’t be written over again. In theory no data should ever be lost when the drive finally wears out after the drive has reached it’s lifespan. Intel states that these drives have a read read latency of 85 microseconds, which is hands down faster than any hard drive on the market today. The power consumption is also very low as the drive uses 150mW on a typical PC workload and at idle it uses just 0.06W. Not bad at all considering most hard disk drives use close to 10W at idle! With no moving parts inside and low power consumption that means hardly any heat and no noise!