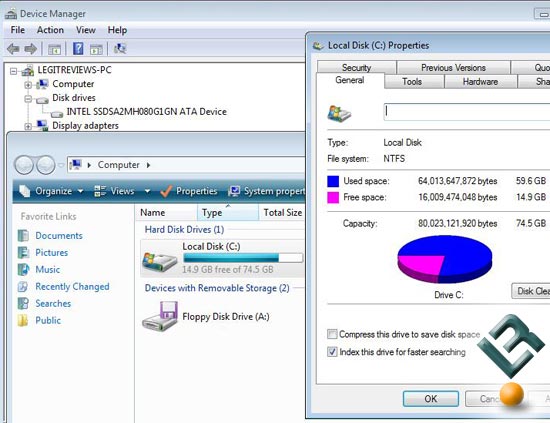 One of our friends at another hard drive company told us at the very last minute to fill up the Intel X25-M solid state drive to where it is nearly full and see what happens to performance. With the Intel SSD being only 80GB it fills up quite quickly, so I figured what the heck and gave it a shot. I filled the Intel X25-M up to where it was 80% full, which means that only 14.9GB of the available 74.5GB was available. 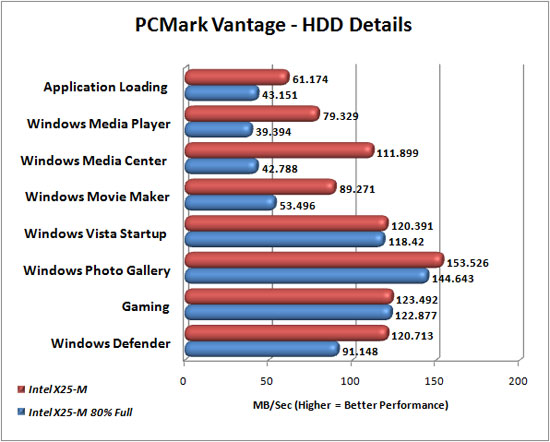 Obviously, something is going on here to get the decrease in performance that was witnessed in PCMark Vantage. I tested the Western Digital VelociRaptors in RAID 0 with them at 80% full also and the scores actually went up across the board, but not by a significant amount like what we see on the SSD. The overall score with just Windows Vista Ultimate 64-bit installed and PC Mark Vantage was found to be 22,256. With the drive 80% full and after a reboot the system same system scored 15,519, which is a 30% drop in the overall score. Looks like this is something worth taking a closer look at in the future!

The Intel line of Solid State Drives is certainly one of the most anticipated pieces of hardware for 2008. Intel without a doubt raised the bar with what one can expect with Solid State Drives by producing a drive that can compete with any drive on the market, be it solid state or a hard disk. The highlights of the Intel X25-M has to be the fast that it uses hardly any power, puts off little heat and the insanely fast read and access speeds. The SSD architecture looks a lot more appealing now that Intel has entered the market and Im sure that this is only the beginning of many more exciting products to come down the pipes.

The X25-M performance is out of this world thanks to the 250MB/s sustained read rates that many of the benchmarks highlighted so well. With read speeds like that and 0.1 ms access times one would think that the drive would be perfect, but there is one area that can use some improvement and that would be the write speeds. The Intel X25-M didnt look too hot on the write speeds and got creamed by the Western Digital VelociRaptors in RAID 0 when it came to write performance at roughly the same price point. Part of this is due to the MLC design that the drive uses and remember Intel has an Extreme series of Solid State Drives coming out that are use SLC and have a 100MB/s faster write speed. This means that the Extreme drives will be able to write at 170 MB/s, which would put it close to the VelociRaptors in many of the benchmarks. The only other area that showed weak performance was when the drive was nearly full. This could have been due to the wear leveling that Intel has designed for this drive or something else all together.

When it comes to pricing Intel X25-M 80GB MLC version that I covered in this article is priced at $595 for quantities up to 1,000 and is shipping to OEM and Channel customers this week. The SSD will then begin shipping from these customers in their PC solutions or as a stand alone drive. If you aren’t turned away by the drive being just 80GB then the Intel X25-M is a wicked little solid state drive that is sure to leave you smiling at the end of the day.

If you want to wait for the single-level cell (SLC) SSDs for your system youll have to wait about 90 more days for them to come to market. I’m drooling right now just thinking about the performance of one of those!

For taking MLC SSDs to a new level by creating their own controller and using their own NAND flash IC’s it seems only right to give the X25-M the innovation award! 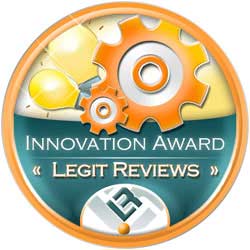 Legit Bottom Line: The Intel X25-M Solid State Drive has raised the bar when it comes to multi-level cell (MLC) SSDs and worth a look if you have never used an SSD before!