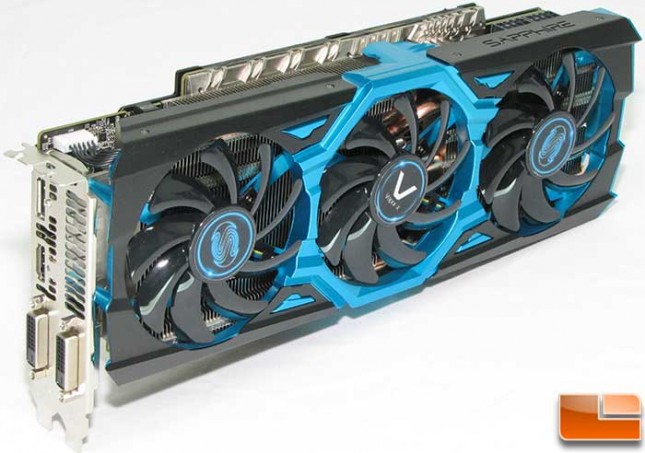 The Radeon R9 290 GPU came out in November 2013, making it almost 6 months old, and while it isn’t the top of the line model it still has some impressive specifications. Powered by a single 28nm AMD Hawaii GPU, it features 2560 Stream processors running at 947MHz, and 4GB of GDDR5 memory clocked at 5000MHz. Sapphire has taken those specifications and boosted them a little with their Overclocked edition. The Stream processors are running at 1030MHz, and the 4GB GDDR5 memory has been clocked to 5600MHz. Sapphire doesn’t stop there, they have also added their Tri-X Cooling which features three fans rather than the standard two fans, and their Vapor-X technology to their Vapor-X R9 290 Overclocked which is currently available as part number 11227-04-40G for $499.99 shipped; a 2 year warranty is included at that price.

The front of the Sapphire Vapor-X R9 290 has three 90mm fans on the front of the card, with 9 blades on each fan. The fan shroud is black and blue which really makes the card stand out. On the fan shroud there are channels which will help the air to flow out the back of the case rather than into the case. The overall dimensions of the Vapor-X R9 290 is 12 x 4.5 x 1.85 inches (L x W x H), making this a rather long card. In addition, the thickness of the card at 1.85 inches will require the user of 2.5 PCI-E slots rather than just taking up 2.

Taking a look at the top edge of the video card there are several interesting features. On the far left side there is a little Sapphire logo button that switches between the Legacy and UEFI BIOS support; it ships in Legacy BIOS mode. Pressing the button activates the UEFI BIOS, providing support for Secure Boot and a faster boot time through UEFI. The button lights up in blue in UEFI mode. Looking beyond the button, we can see the large heatsink cooling fins used to cool the GPU, there are five heatpipes being used to distribute the heat, a large 10mm, two 8mm and two 6mm. On the far right are the power connectors and the Sapphire logo, which lights up in three colors to indicate the temperature. 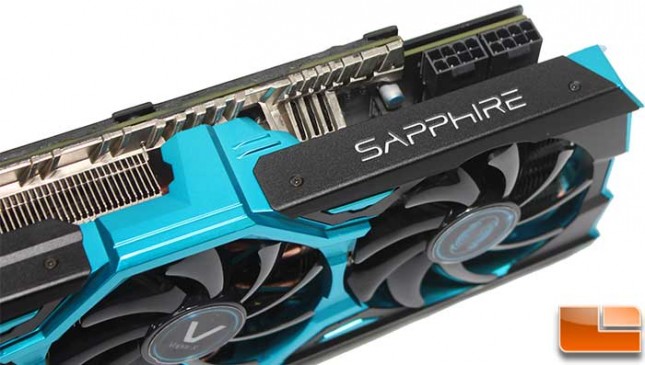 The power requirements of the Vapor-X 290 OC is for a 750W power supply. This power is transferred to the card by two 8-pin PCI-E power connectors. The Sapphire logo can be seen here, when it lights up, the color indicates the temperature of the card, Blue (0 to 60C), Yellow (60 to 80C) and Red (80C or higher). This has a tolerance of +/- 5C, so it is just a helpful way of getting an idea of the temperature, utilizing other tools is required to get a more accurate temperature. Where the back heat shield meets the PCB there is some thermal sealant coming out the top of the card, while not a major issue it can get a little messy for those that are extremely particular. 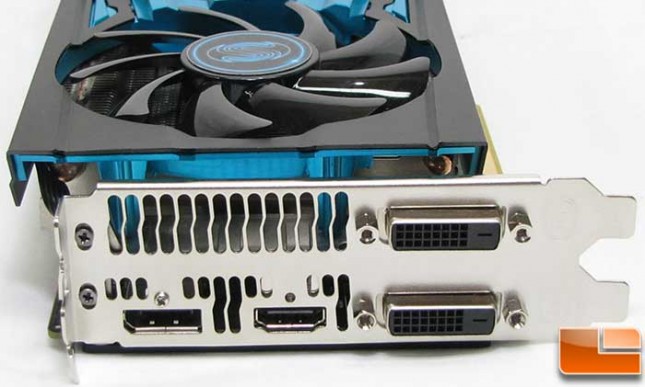 The back of the video card is pretty plain since it is covered by the Vapor-X heat shield. Other than the top edge, this is probably the side the most users will see, even if it wasn’t the Vapor-X model, this is a great way to finish a high end video card giving it a sleek backplate. 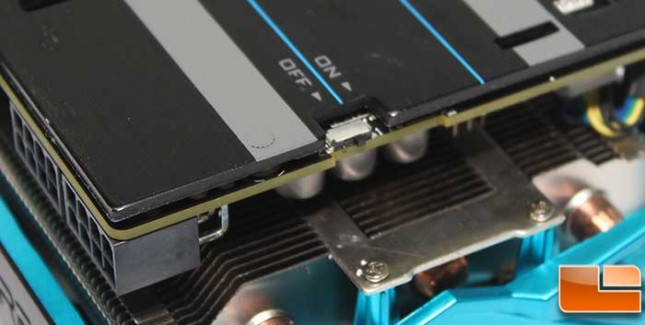 On the back of the card is a tiny switch that controls the integrated fan controller. When the switch is set to off, all three fans operate under the same speed; however, when it is in the on position, the outside fans will only run when the GPU temperature is over 60C. This reduces the noise level created by the three fans.

This product supports both Legacy and UEFI BIOS. By factory default, the card itself is under Legacy mode. By pressing the button with SAPPHIRE logo, UEFI mode will be easily enabled.

Let’s take a quick look at the retail packaging and accessories before starting some benchmarks.