The Samsung 980 PRO series of PCIe 4.0 NVMe SSDs were introduced in September 2020 and can reach speeds of nearly 7 GB/s read and 5 GB/s write. That series is most impressive, but they are not exactly affordable for the masses and not everyone needs PCIe 4.0. Enter the Samsung SSD 980 series of PCIe 3.0 NVMe SSDs that come out today with speeds of up to 3.5 GB/s read and 3.0 GB/s write. This series of DRAM-less drives is all about delivering the best performance per dollar for mainstream consumers. 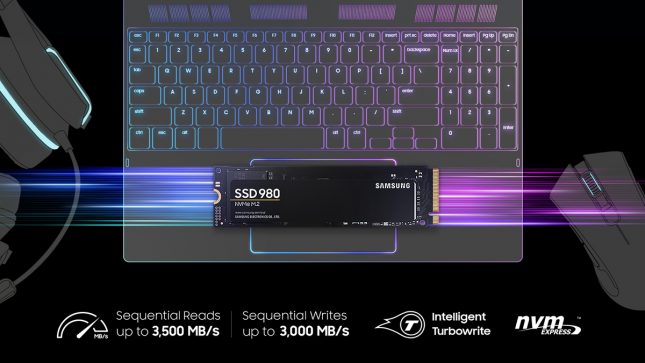 Performance and endurance numbers ultimately depend on the Samsung SSD 980 drive capacity, so we’ve included the table below to give you a quick look at the key differences of each of the drives. 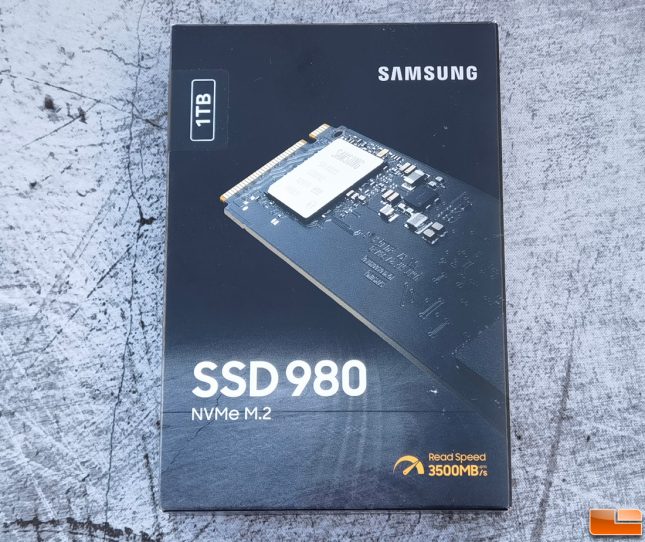 Samsung sent over the new 1TB version of the SSD 980 for us to check out our AMD Ryzen X570 platform! 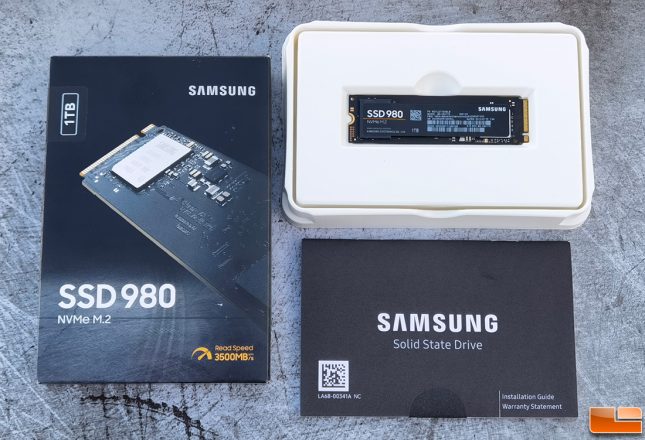 After opening up the retail box you’ll discover the drive and a paper installation guide.

On the back of this single-sided M.2 2280 drive you’ll find just the label and no major components. 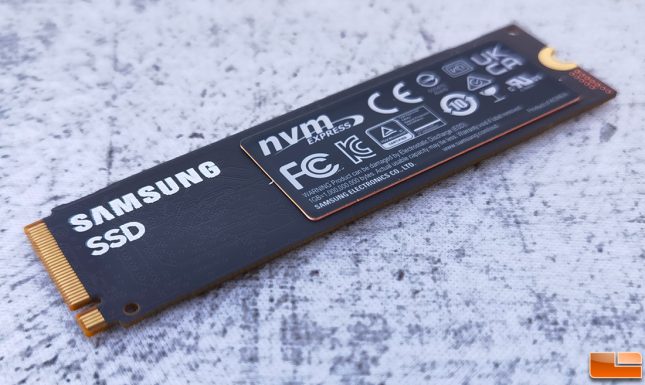 The Samsung SSD 980 features Dynamic Thermal Guard (DTG) technology to reduce thermal throttling. On the back of the drive there is a label that has a thin piece of copper in it to help dissipate heat. You can see the copper heat spreader in the label better at an angle like in the image above. The label is placed behind the NAND Flash chip and not directly behind the SSD controller. 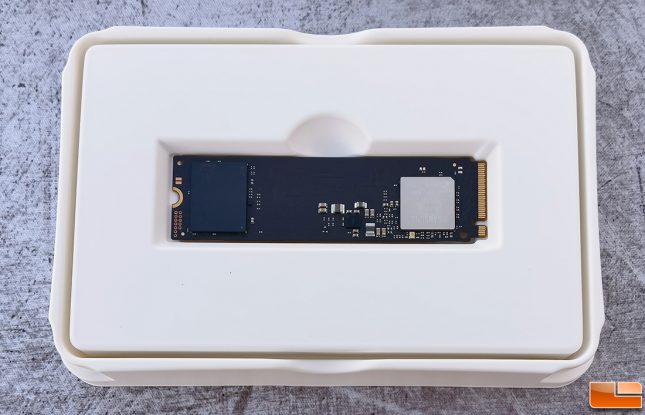 Want to see what the drive looks like under the label? We removed out label, so you can take a look at the layout of the Samsung SSD 980 1TB drive. 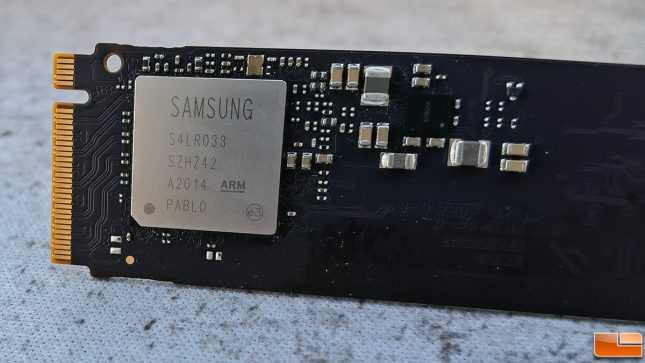 Here is a closer look at the Samsung Pablo Controller. Samsung was not willing to discuss cores, channels or clocks. It we had to take a guess it likely has three ARM Cortex R5 cores and a 4-channel design. The controller is topped with a nickel coating that helps lower the SSD controller temperature by about 5C on average during active use.

Samsung did confirm to Legit Reviews that this is the same controller that they are using on the Samsung Portable SSD T7 series that was introduced in May 2020. That drive also happens to be DRAM-less. Without a dedicated DRAM Cache the FTL tables will be written to the system memory of the host PC using the Host Memory Buffer (HMB) method. HMB helps lessen the I/O performance hit of not having dedicated DRAM sitting next to the controller on the SSD and has been around for a number of years. HMB was first introduced with the NVMe 1.2 protocol back in 2014. 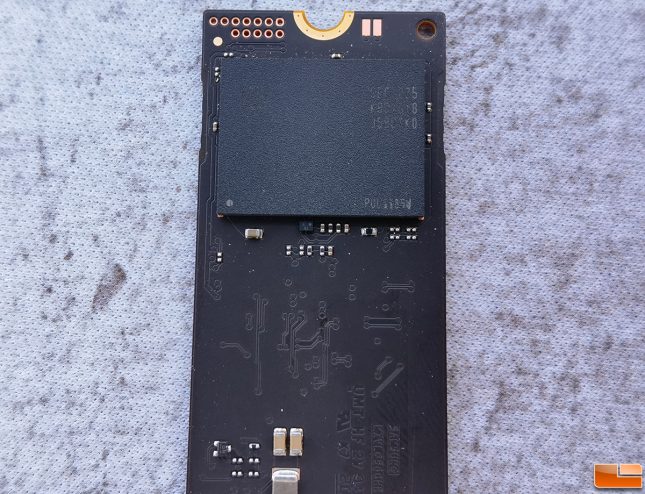 The only Samsung 128-Layer TLC V-NAND chip on the drive is located on the far end of the drive. With the label removed you can see four lines of text that is hard to make out. 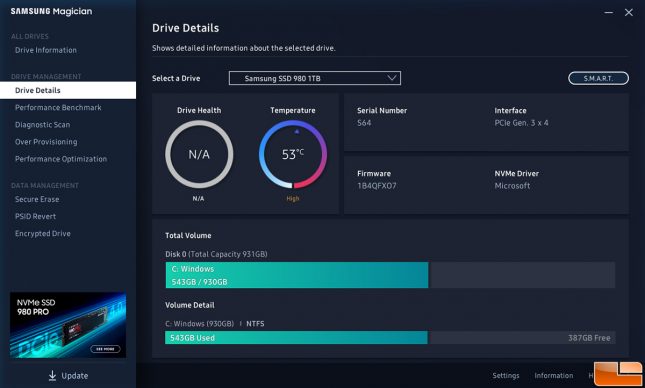 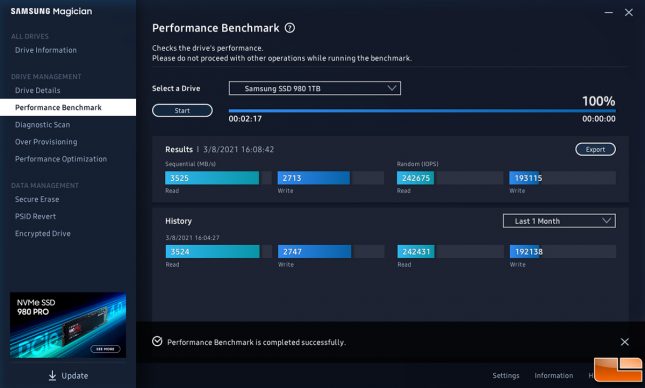 Samsung Magician has a built-in performance test that does four corner testing. This benchmark shows the NVMe SSD 980 1TB drive reached highs of 3525 MB/s read and 2747 MB/s write for sequential performance and 242,675 IOPS Random Read and 193,115 IOPS Random Write as the boot drive. We test with ~55% data fill on the drive, so these are respectable numbers. 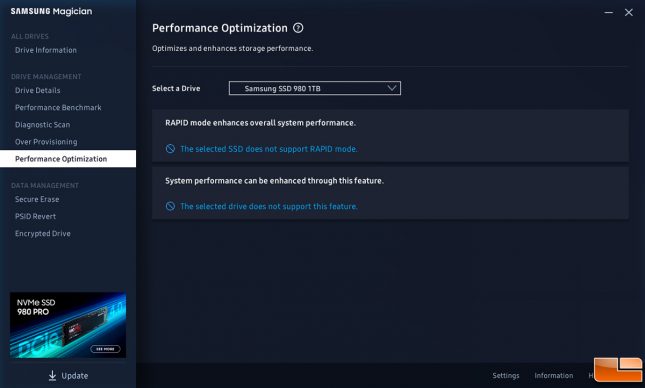 Samsung Magician also allows you to enable over provisioning and performance optimizations like RAPID mode, but all those features were not supported by this drive on this version of Samsung Magician. 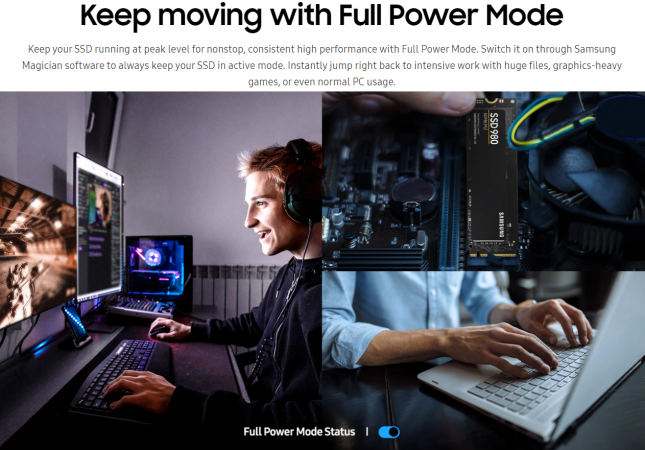 Samsung is also introducing the ability to run the SSD 980 series in full power mode for peak performance. Unfortunately, this feature will only be available in Samsung Magician 6.3 and later. Samsung will not have that done until later this month and we were unable to try out this new feature that they are marketing.

Let’s take a look at the test system and then show you how the Samsung SSD 980 1TB did on our usual test suite.