OCZ sent over some marketing slides for us to take a look at when we received the Trion 150 SSD and one of the slides noted that the Trion 150 has been optimized for enhanced performance over the OCZ Trion 100. On the slide, OCZ claims that users will experience up to a 50% increase in performance in many real world use cases such as file transfers. 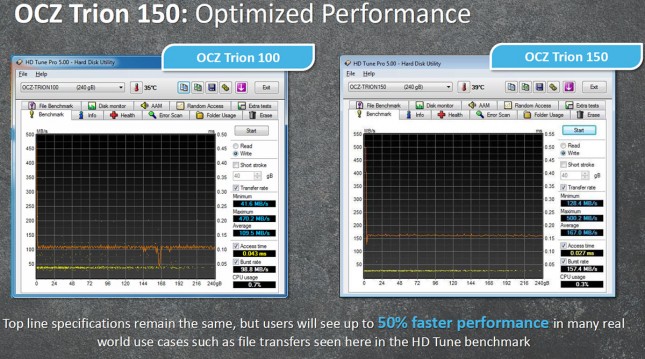 In our original review we did a 128KB sequential write for a long period of time and found the OCZ SSD Trion 100 480GB SSD was writing data at over 500 MB/s for about 6 seconds and then dropped down to 100-160 MB/s. Simple math showed that the SLC buffer used on the Trion 100 was around 3GB in size and since we were doing a long sustained period of writes that exceeds the buffer size we were able to see the difference in writing to the SLC buffer and then straight to the TLC portion of the drive once the SLC was full. It appears that OCZ made improvements to their caching algorithm on the Trion 150 and of course they are using a totally different generation of TLC NAND Flash. 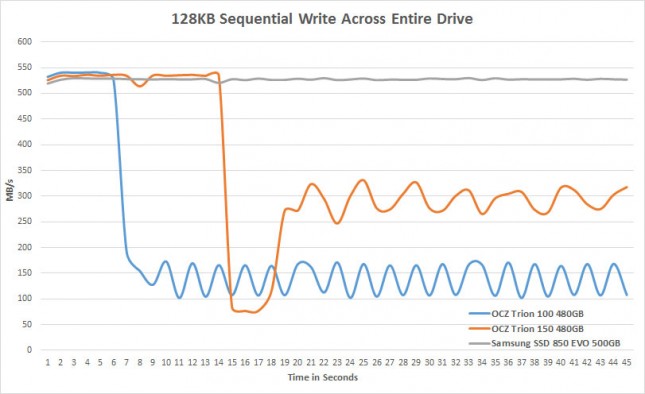 Duplicating the same test as before, we found that the OCZ Trion 150 480GB drive was able to hold it’s rated sequential write speed for about 16 seconds this time around. This is 10 seconds longer than the Trion 100 480GB drive! Once the buffer was full the performance went from 534 MB/s to 77 MB/s for three seconds and then recovered to the 265 MB/s to 330 MB/s range for the remainder of the test. When you average everything over the 45 second period that we are focusing on these are the average speeds that you come up with:

This quick and simple test showed that for our 45 second sustained sequential write test that the Trion 150 had an 80.9% performance advantage over the original Trion 100! If you are transfering a small file (8.5GB or less) you should be able to do it at full speed! This is great news for those that move around digital DVD or BluRay movies as a good number of rips are under 8.5GB!