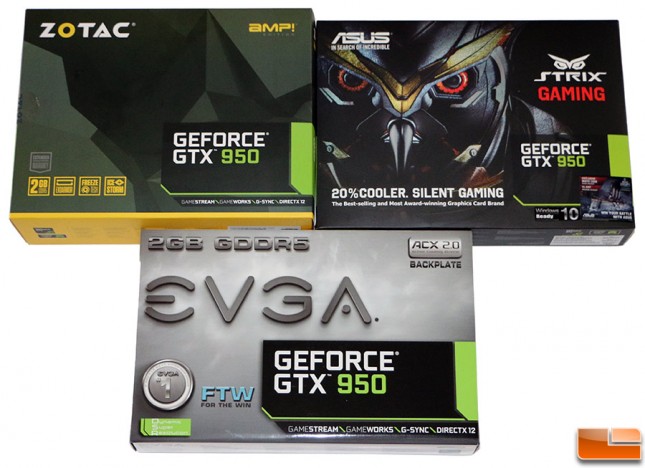 These three NVIDIA GeForce GTX 950 2GB video cards from ASUS, EVGA and Zotac are the best that each company has to offer. We are impressed by what you get for $169 and all of these cards will make for excellent 1080P gaming graphics card. Let’s summarize each card again for you and tell you what card we’d get if we had to pick just one.

The Zotac GeForce GTX 950 AMP! Edition 2GB video card was without a doubt the smallest and fastest video card in the bunch. The card also incredible overclocking performance and we were amazed just how far we could push the GDDR5 memory when overclocking as it just kept going higher and higher! The Zotac GeForce GTX 950 AMP! had half the power phases than the EVGA card, but that clearly didn’t impact stock or overclocked performance. Those high clock speeds and small size of the card meant that it needed the fans to run faster to keep it cool and it used the most power of the group. The achilles heel of this card would most certainly have to be the Zotac IceStorm GPU cooler. The fan ramp profile for the card is too extreme for our liking and the card is very loud compared to the competition in this class. Not to mention this card only has one DP video output and the backplate sticks out further than we’d like to have seen and it might cause interference issues on some motherboards. If you aren’t bothered by fan noise and want the fastest card out of the box for $169.99 shipped then look no further.

At the bottom of the performance charts was the ASUS GeForce GTX 950 STRIX 2GB video card. The GTX 950 STRIX is a very well designed card and it doesn’t really have any weakness or flaws, unless you want to consider the relatively low clock speeds a flaw. ASUS was very conservative with the core clock speeds on this card, so it wasn’t on par with the others when it came to performance. The good news is this card is a very capable overclocker and when overclocked it was right up there with the other two cards. The ASUS Direct CU II GPU cooler keeps the card running quiet when you are gaming and is more than capable of keeping it cool when overclocking it to the max. The best price we could find for the ASUS GeForce GTX 950 STRIX 2GB video card was $159.99 shipped after a $10 rebate card (rebate ends on 9/30/15).

We called the EVGA GeForce GTX 950 FTW overbuilt on the ‘closer look’ page and we still feel like that card has an amazing amount of features for a GTX 950. The 8-phase (6+2) power design with an 8-pin connector is silly for a 125W card, but somehow EVGA pulled it off and was able to keep the card priced within $10 of the others. They also includes the largest GPU cooler, a backplate and they have the only card with dual BIOS chips. The large EVGA ACX 2.0 GPU Cooler made this card by far the longest in the group, but it was the quietest at idle and when gaming in stock and overclocked form. The performance on the card was right in the middle of the pack and while we wish the memory on our card overclocked higher it was still respectable. You can purchase the EVGA GeForce GTX 950 FTW 2GB video card for $169.99 shipped after a $10 rebate card (rebate ends on 9/30/2015). 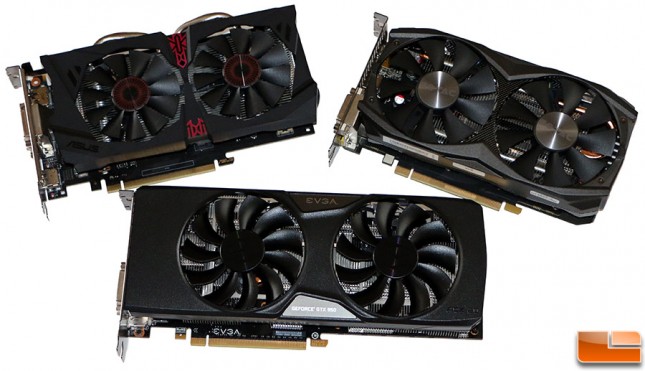 All three cards are good, but the fan noise on the Zotac GeForce GTX 950 AMP! Edition was a deal breaker for us despite being the fastest card of the group and being the shortest length card. That leaves the ASUS and EVGA cards and that is a really tough choice as there is a $10 price difference between the two. We’d likely lean to the EVGA GeForce GTX 950 FTW card due to the extra features it has. If you’d rather have a 8.6″ long card instead of a 10.1″ card for some reason then the ASUS GeForce GTX 950 STRIX should be tops on your list.

Legit Bottom Line: The flasghip NVIDIA GeForce GTX 950 cards from ASUS, EVGA and Zotac show that 1080P gamers can get some really nice feature rich desktop gaming graphics cards without having to rob a bank!