We installed a third party overclocking utility and pushed the core clock up as high as we could for overclocking. We overclocked the memory on each card up to 7400MHz from 7000MHz. With that memory overclock you have about 355GB/s of memory bandwidth and that certainly won’t be limiting performance in any game title, so we focused on the core clock on our overclocking journey. Since we were overclocking several cards we left the voltages at their default settings and pushed the clock speed on the 2880 CUDA cores as high as we could with gaming stability. The EVGA and MSI cards have a VDDC of 1.1870 and the Gigabyte card has a VDDC of 1.2000, so we’d expect the Gigabyte card to overclock higher since it is getting more voltage. 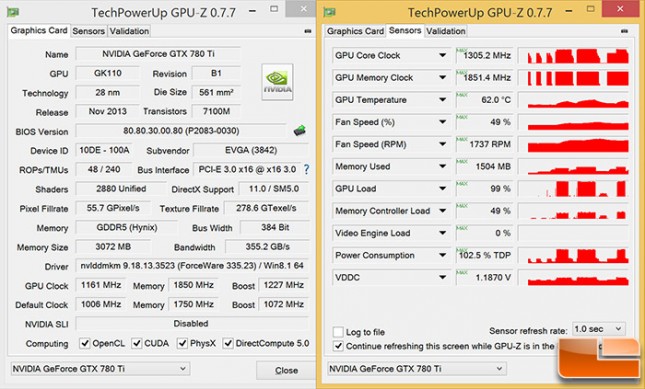 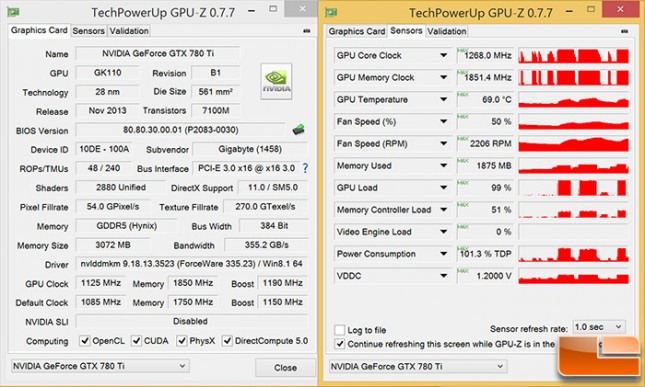 The Gigabyte GeForce GTX 780 Ti GHz Edition card got up to 1268MHz on the core as they card was having stability issues when we went above +40MHz on the core. This small boost was enough to give us a 3DMark Fire Strike score of 11,628. 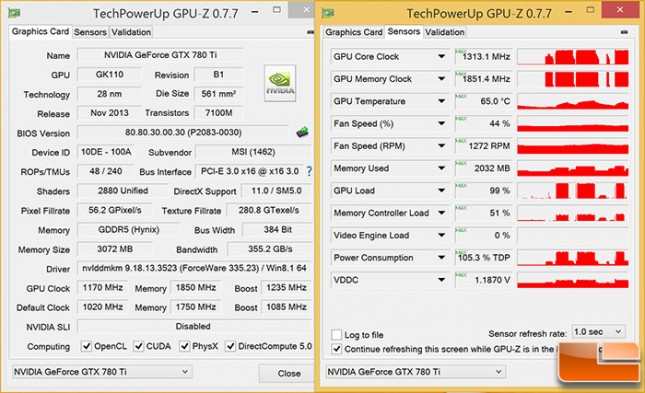 The MSI GeForce GTX 780 Ti Gaming was able to get up to 1313MHz and had the highest core clock of all the three cards. The 3DMark Fire Strike score was 11,379, which wasn’t the highest of the group though.

At the end of the day the EVGA and MSI cards were able to run 1305-1310MHz and the Gigabyte card hit 1268MHz. We were a bit shocked that the Gigabyte card had the best score and was the ‘worst’ overclocker of the bunch as it had the most voltage. All of the cards performed within 3% of eachother, so none of these overclocks are significantly different in the big picture.