The Lexar NM620 is yet another solid PCIe Gen 3.0 x4 SSD that is aimed at the entry-level to mainstream NVMe SSD market. There is no shortage of drives in the segment and drive makers continue to release new products for it since new controllers and NAND Flash comes to market.

We came close to reaching the drives top rated read speed of 3,300 MB/s and write speed of 3,000 MB/s write speed in CrystalDiskMark. It also performed better than we expected in PCMark 10 and it just goes to show how well DRAMless drives have matured over the past five years. The latest controller designs are much better and they are able to deliver a good user experience.  The NM620 series was found to be significantly faster than the Lexar NM610 series that was introduced nearly a year ago. This is important to point out as the pricing is comparable, so you’ll want to go with the NM620 over the NM610 if that is a choice you need to make. 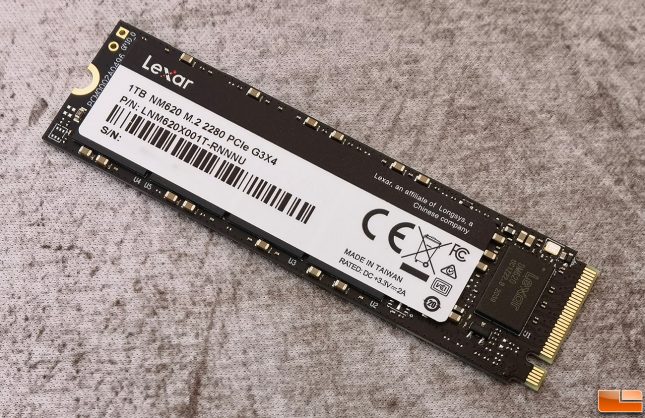 When it comes to pricing the Lexar NM620 1TB model that we reviewed here today can be picked up for $159.99 shipped over at Amazon with free shipping. It comes backed by a 5-year warranty with a 500 TBW endurance rating.

This drive seems like it is a good fit for those that are looking for an affordable storage solution. Most consumers don’t need hardware-accelerated AES 256-bit encryption and are okay with the DRAMless design. They also don’t likely don’t need a PCIe 4.0 capable drive and right now all PCIe 4.0 SSDs are still pretty pricey. You’ll be able to find faster drives that are more responsive, but is it worth the higher cost and will the user actually be able to notice? Not everyone is a gamer or an enthusiast!

Legit Bottom Line: The Lexar NM620 delivers a good performance uplift over the Lexar NM610 series that was introduced less than 1-year ago!