Lexar officially launched the NM620 M.2 2280 PCIe Gen3x4 NVMe series of SSDs on March 10th, 2021. They claim the NM620 “is a perfect solution designed for content creators and gamers” that are looking for an SSD that can handle intensive workloads and improve their system performance.

What kind of performance are we talking about? Sequential speeds are up to 3,300 MB/s read and 3,000 MB/s write for the Lexar NM620 models. Random 4K performance is up to 300,000 IOPS read and 265,000 IOPS write. These aren’t bad performance numbers for a mainstream drive that uses TLC NAND Flash and backed by a 5-year warranty. 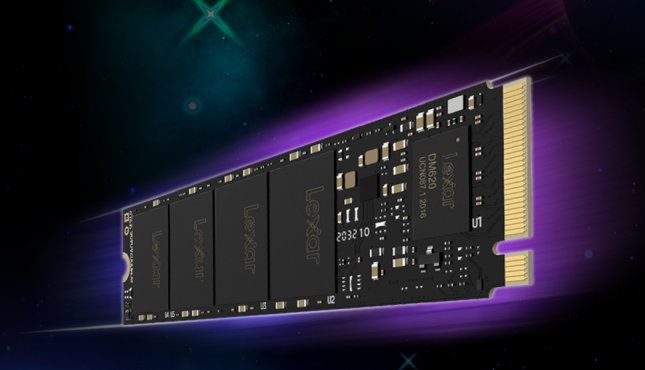 So, what is the catch? All NM620 are DRAMless drives that utilize the Host Memory Buffer (HMB) in Windows 10 for a solid user experience. This means that the drive doesn’t have a dedicated memory chip on the drive to hold the translation (mapping) table. This means a tiny slice of your system memory holds that data and storing this data off the drive and on your PCs DRAM is slower than having it on the drive itself. This is something we’ve seen entry-level drives for several years now and it is a feature supported by Windows 10 anniversary edition came out in 2016.

Pricing on the Lexar NM620 series is priced at around $0.16 to $0.18 per GB when this review was published. We were unable to 256GB drive for sale in North America, so we don’t have local pricing data on that drive. It listed on the Lexar NM620 product page, so we included it in the table above. 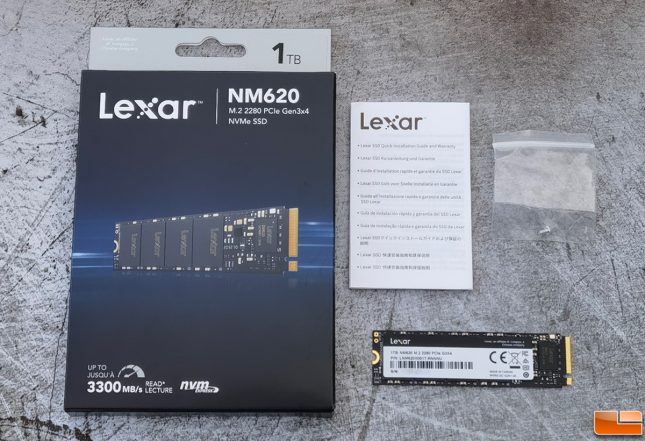 Lexar sent Legit Reviews the NM620 1TB version for us to check out our AMD Ryzen X570 platform! The part number on our 1TB test unit was LNM620X001T-RNNNU.

Inside the box you get the drive and instructions and an installation screw for the M.2 slot if you might need one. Not all drives come with a screw, so this is nice if you lost the one that came with your motherboard.

The Lexar NM620 PCIe NVMe SSD looks like your typical M.2 drive! It has a black PCB with a label on the front. This is an entry-level PCIe Gen3 storage solution, so a fancy heatsink is not needed and would have driven up costs.

On the back of the drive there are no components as this is a single-sided drive. Lexar’s NM620 1TB NVMe SSD should fit in any desktop or laptop that has an M.2 2280 slot! 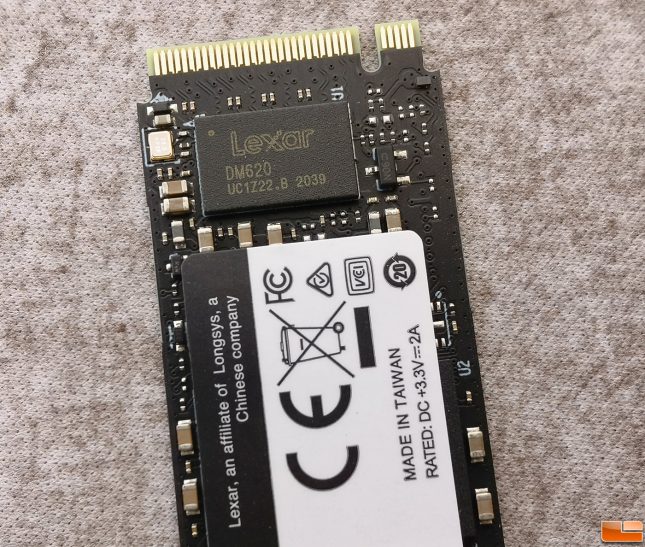 The controller is clearly visible and is marked as the Lexar DM620. Lexar doesn’t make their own controller, so clearly they Lexar declined to comment on what controller they are using, but we have many contacts in the SSD market and confirmed that this is an Innogrit IG5216 Shasta+ PCIe Gen3 x4 controller. This is a low-cost mainstream DRAMless controller controller built on the 28nm manufacturing process that supports HMB and end-to-end data path protection. The BGA package size is fairly small at 7mm x 11mm, but it is capable of delivering up to 3.2 GB/s sequential read and 2.5 GB/s sequential write according to Innogrit. The 4K Random Read/Write performance is up to 500,000 IOPS read and 350,000 IOPS write. 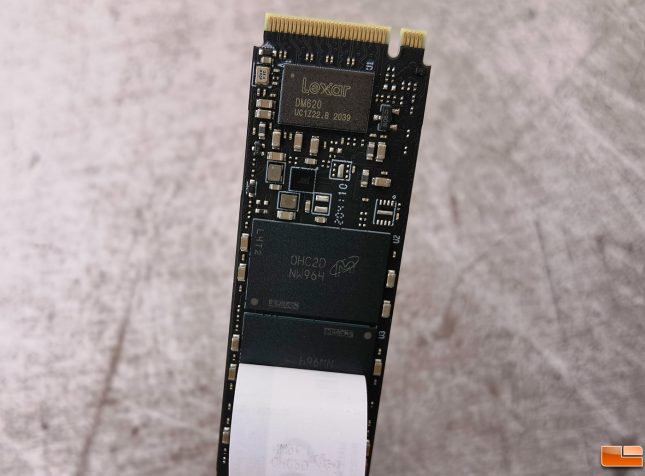 With the label peeled back we can get a look at one of the Micron 96L TLC NAND Flash chips. The FBGA code is NW964 and that tells us the part number is MT29F2T08EMLCEJ4-R:C for the TLC NAND Flash. This is Micron B27B 96L TLC Flash that typically operates at 1,200 MT/s.

Let’s take a look at the test system and then see how the Lexar NM620 performed.