To review the Intel Core i7-6700K we will be using the ASUS Z170 Deluxe motherboard. This motherboard is regarded as one of the best Intel Z170 chipset and is one of the few that is said to be capable of running DDR4 memory kits at 3600MHz and beyond on launch day. 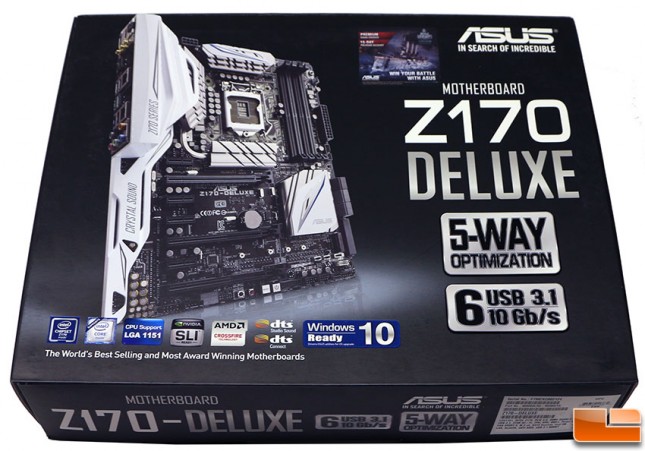 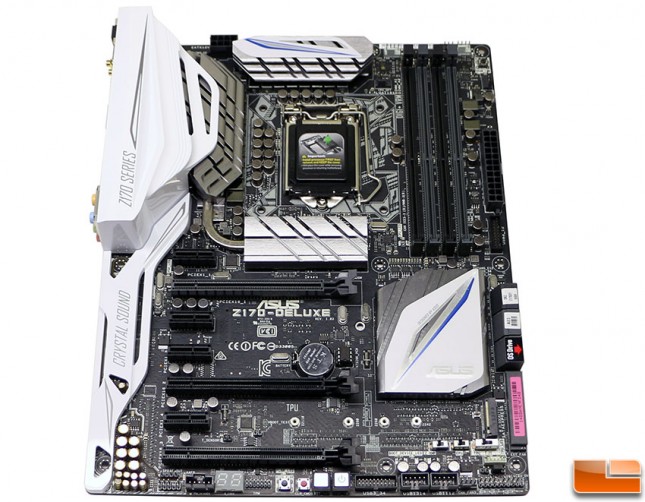 ASUS introduced the current color scheme with the Intel X99 platform, ASUS has further refined the white and black scheme for the ASUS Z170 Deluxe. Overall it’s a slick looking piece of hardware, but looks will only take you so far if you can’t perform. Knowing and using a number of ASUS motherboards over the years, there’s a good chance that the ASUS Z170 Deluxe will have the performance to back up it’s looks. At first glance the ASUS Z170 Deluxe layout looks to be pretty typical and what one should expect to see. 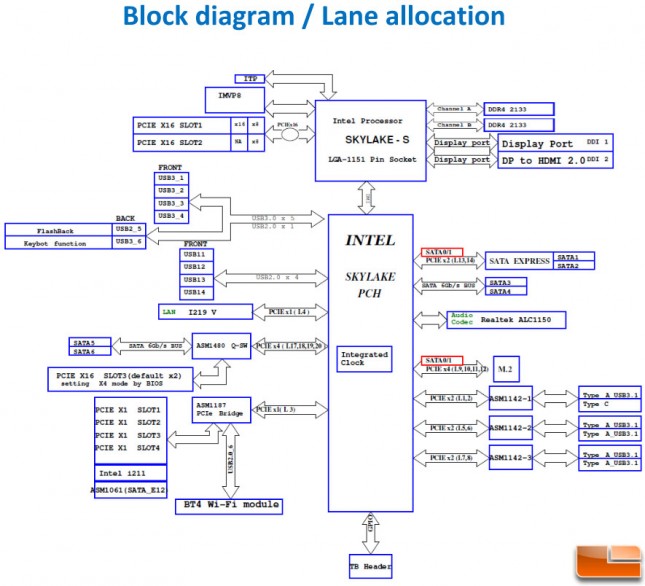 Here is the block diagram for the ASUS Z170 Deluxe motherboard that shows how everything is connected to the Skylake-S CPU and the Z170 Chipset! 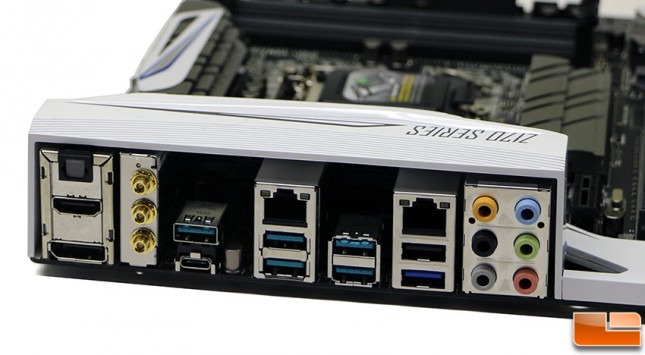 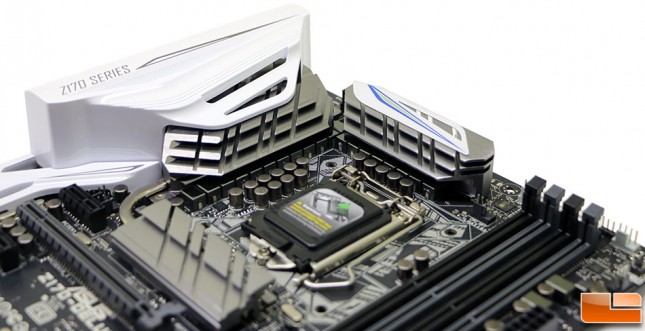 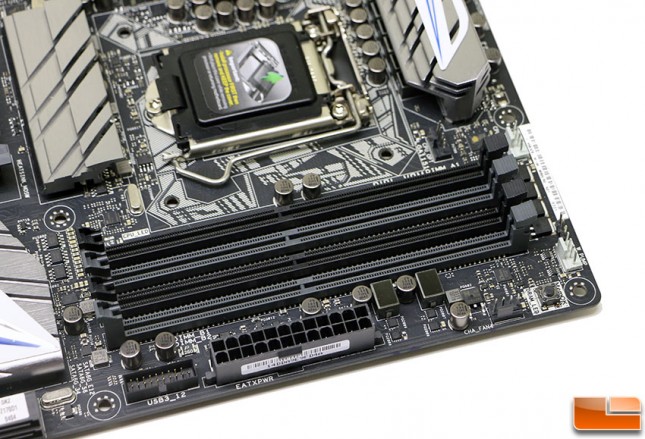 The ASUS Z170 Deluxe motherboard is rumored to be among the few that will support DDR4 memory speeds in excess of 3600MHz from day 1! Officially though, the ASUS Z170 is rated for as high as 3466MHz (O.C.). Off to the right of the DDR4 DIMM slots, there is a pair of 4pin fan headers (white) as well as another pair (black) just to the left of the memory latches (one above the DIMMs one below). Just to the left of the motherboard screw hole, you can see the MemOK! button, this will help to sort out any memory compatibility issue you may run into. Fortunately, ASUS has a pretty solid track record of memory compatibility. To the left of the 24-pin motherboard power is the first of two internal SuperSpeed USB 3.0 headers. 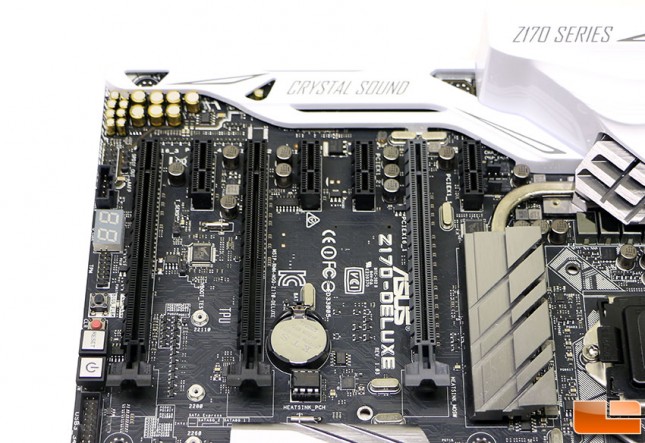 The ASUS Z170 Deluxe has three PCIe X16 slots and is capable of running 3-way NVIDIA SLI or 3-way AMD rossFireX multi-GPU configurations. If one GPU is installed the primary x16 slot runs at x16, but with two installed the primary and secondary slot both run at x8 speeds. The third PCIe x16 slot runs off the Z170 PCH and is default set to run at x2 mode although it h as the ability to run at x4 mode if you wanted to enable that in the UEFI. If you enable that you’ll disable SATA 5/6 as that is that is what those lanes are being shared with. A properly setup triple video card setup will run at x8/x8/x4 and you’ll disable two of the eight SATA III ports to enable this. There are four PCIe 2.0 x1 slots also located on the board for accessory devices that run off a PCIe bridge chip that also runs the boards 802.11ac wireless card that is ultimately connected to the Z170 PCH as well.

The ASUS Z170 deluxe has a total of eight SATA III ports which are all controlled by the Intel X99 chipset. Six are regular SATA ports and two make up part of the SATA Express port. All of the SATA ports are native to the Intel Z170 chipset. 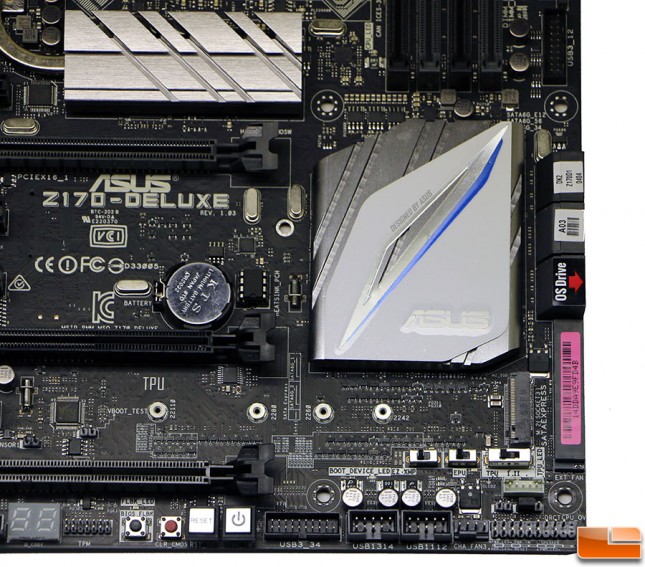 The ASUS Z170 Deluxe has one M.2 socket 3 with M Key located directly on the board and it supports supports type 2242/2260/2280/22110 drives and both SATA III (6G) as well as PCIe 3.0 x4 SSDs. This is one of the few Z170 boards on the market today that support 110mm length M.2 solutions that are expected to become more popular in the months and years ahead with the introduction of higher capacity drives. ASUS Supports NVMe U.2 devices with an add-in module and the included ASUS Hyper M.2 Mini PCIe x4 add-in card.

We hope to have a review on this board shortly, but we just wanted to give you a quick overview of the board that we’ll be doing testing on.

Let’s take a closer look at the overall test system and move along to the benchmarks!