The Intel SSD 665p is basically a refresh of the Intel SSD 660p series that was introduced in late 2018. The improvements are subtle, but you do get double digit performance gains and a significantly longer endurance rating. The good news is that the Intel SSD 665p series is superior in every way to the 660p series! We managed to nail the drives rated sequential speeds of 2,000 MB/s read and 1,925 MB/s write using CrystalDiskMark 7. It is nice to see QLC drives getting higher performance and endurance ratings as they needed a little boost to be more competitive against the lower priced TLC drives. 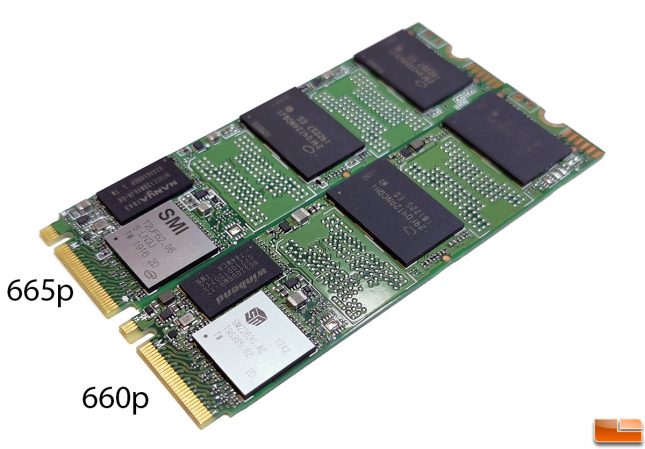 So, what about the bad stuff when it comes to the 665p? Well, that would have to revolve around pricing. When this article was published the 665p 1TB model could be found on Newegg for $129.99 shipped. That price point puts the Intel SSD 665p 1TB drive in an odd position as the SSD market is flooded with some really good drives right now. For example an extra $10 will allow you to move up to a 96-layer 3D TLC NAND (BiCS4) drive like the Sabrent Rocket 1TB ($139.99). That drive can be seen in our performance charts and delivered better performance in most areas with a much larger endurance rating. QLC drives need to be substantially lower than TLC drives given what they offer right now. Yes, we still have a preference for TLC over QLC, given similar pricing. We asked Intel for pricing guidance on the 665p 2TB model, but they can’t give any since the 2TB model has yet to be released.

At the end of the day the Intel SSD 665p drive series is aimed at mainstream systems where most users will never know what QLC NAND Flash means. Most of the drives will be used by system builders who aren’t worried about having the best performance or longest endurance rating around. They just want a reliable drive that offers solid performance and the Intel SSD Toolbox ensures customers will be able to update their firmware without needing to send the system back in for repair work. The Intel SSD 665p should be a good fit for systems like that. You’ll end up with an entry-level NVMe drive that offers better performance than any mechanical hard drive or SATA III SSD at a respectable price. We just wish that price was a about $10 to $15 lower than where it is right now.

Legit Bottom Line: The Intel SSD 665p is an improvement of the 660p, but the current pricing of the 1TB model puts this QLC NAND Flash powered drive in a tough position!