Sabrent is an American company that has been manufacturing consumer electronics going as far back as the 1990’s. Oddly enough, in the 18 years that Legit Reviews has been around we’ve never bumped into Sabrent at any trade shows nor reviewed any of their products. This review on the Sabrent Rocket 1TB NVMe SSD changes all that as we finally have something Sabrent branded to get our hands on. 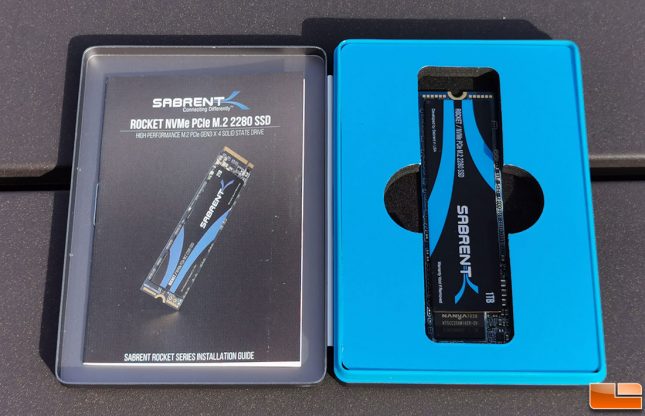 The Sabrent Rocket NVMe SSD series actually came out in December 2018, so our first review on Sabrent is on an older model based on the Phison E12 reference design. Sabrent is a customer of Phison, who offers turnkey drive solutions and assembly services using their in-house designed controllers. Phison has a large list of customers and has become a well known name in the SSD market in recent years. Most the the SSD manufacturers found at your favorite e-tail store are basically re-branders these days.

Sabrent has been able to stand out from the crowd lately by offering incredibly low prices on their storage drives. The Sabrent Rocket NVMe SSD series just happens to be one drive that has gained notoriety since it came to market due to this. SSD prices have started to increase though due to NAND Flash supply issues, but they are still very affordable and pricing is predicted to continue to increase. Sabrent is using the Phison E12/E12S controller paired with Toshiba 3D TLC NAND Flash memory (BiCS3/BiSC4) to deliver sequential speeds of up to 3,450 MB/s read and 3,000 MB/s write on the Rocket SSD series. Random 4K performance you are looking at up to 580,000 IOPS Read and 650,000 IOPS Write.

Impressive numbers, but performance varies depending on what capacity drive that you are purchasing. Right now the Sabrent Rocket is being offered in five different sizes; 256GB ($46.98), 512GB ($79.98), 1TB ($139.99), 2TB ($259.98) and a monster 4TB model ($749.99). We’ve included the general performance numbers from the Sabrent website below, so you can see the different power and performance numbers for each drive capacity. 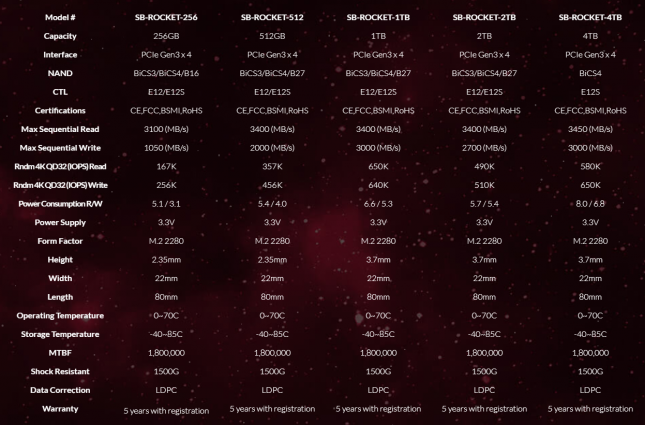 All of the Sabrent Rocket series drives are backed by a 5-year warranty, but you have to register your drive with Sabrent to get that warranty length. If you do not register your drive you’ll end up with a 1-year warranty. You have 90-days to register the Sabrent Rocket drive that you purchase to get the 5-year warranty period. We don’t like it when companies make you jump through additional hoops to get a longer warranty period, but this is likely one of the ways Sabrent helps keep pricing down as most people likely don’t register their purchase. Sabrent also does not clearly list the endurance ratings for the Rocket series on their website, but we asked and found out the endurance ratings are as follows:

So, you are looking at 1665 TBW for the 1TB model and that comes out to being about 912 GB of drive writes per day over the course of five years. That seems very generous as very few consumers are writing over 900 GB of data to their drive each and every day.

The drive that we were sent out to review was the Sabrent Rocket NVMe PCIe M.2 2280 1TB SSD that is sold under part number SB-ROCKET-1TB. This drive can be purchased from Amazon for $139.99 shipped, which comes out to be around $0.14 per GB. Sabrent uses the standard M.2 2280 ‘gum stick’ form factor and the 1TB model is a single-sided drive as you can see from the images above and below. Sabrent went with a blue PCB for this drive and it doesn’t look bad as it matches the blue on the label. Speaking of the label, it doubles as a heat spreader since it contains a thin piece of conductive metal inside. So, don’t remove it!

There is another label on the back of the drive that shows the model number, capacity and the serial number. Sabrent doesn’t offer any special software or toolbox with the Rocket series, but it does include Acronis True Image cloning software. If you purchase the Sabrent Rocket and want to replace an existing drive you can easily clone it with this free software that can be downloaded right here.