Intel introduced the Intel SSD 660p series with QLC (quadruple-level cell memory) in Q4 2018 for mainstream users  that were looking for affordable high capacity drives. We have learned that sometime this week, Intel will have manufactured its 10 millionth client-based SSD based on their own QLC 3D NAND. That is a pretty astonishing feat and it just goes to show that QLC has done rather well since it was brought to market. Some of the products using Intel’s 1st gen QLC 3D NAND (64-layer) include the Intel SSD 660p and Intel Optane Memory H10 storage solutions. The Intel SSD 660p was reviewed here back in 2018 and earned out value award for helping bring down SSD pricing.

With the Intel SSD 660p series being over a year in age, it shouldn’t come as a surprise to anyone that a successor is ready to take over. Legit Reviews first saw the Intel SSD 665p when it debuted in South Korea during an Intel Storage event in September 2019. The new Intel SSD 665p series uses newer Intel 96-layer QLC (quad-level cell) 3D NAND Flash paired with the Silicon Motion SM2263EN controller. The internal code name for the 665p drive series is ‘Neptune Harbor Refresh’ and it is available right now in 1TB capacities with a 2TB model coming later in Q1 2020. Intel is not offering a 500GB model in the 665p series as it had with the previous-gen 660p series nor is there a larger 4TB model listed. We really expected to see a 4TB model come to market at launch for the 665p series, but Intel is saving that for another day. 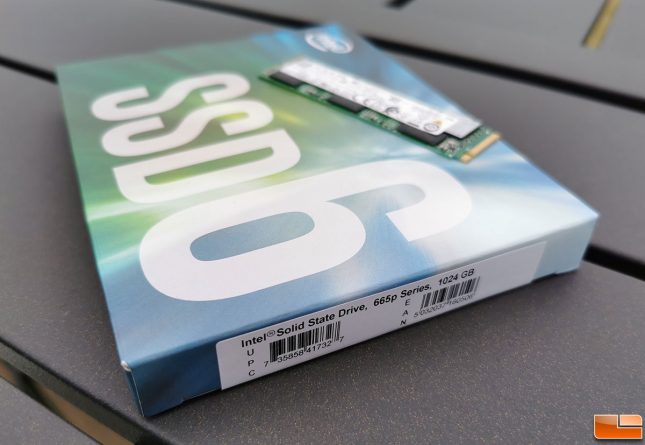 The performance numbers on the 665p 1TB model look pretty good as it can reach sequential speeds of up to 2,000 MB/s read and 1,925 MB/s write. Random 4K performance is rated at of up to 160,000 IOPS Read and 250,000 IOPS Write. The ‘old’ Intel SSD 660p 1TB model topped out at 1,800 MB/s for sequential read/write speeds and up to 150,000 IOPS read and 220,000 IOPS write for Random 4K performance. So, the 665p series features better slightly performance thanks primarily with the move to 96-layer QLC NAND Flash. The new QLC memory also allowed Intel to bump up the endurance from 200 TBW on the 1TB 660p up to 300 TBW on the 1TB 665p. Better performance and longer endurance ratings are the two most obvious improvements on the 665p series.

Intel touts that the Intel SSD 665p offers up to 13.6% better burst performance and 50% more endurance than the Intel SSD 660p series as you can see from the slide above. We also took some of the key specifications from the ARK page and made the image below for you to check out. Notice that the power draw numbers remain unchanged and the warranty period remains at 5-years. 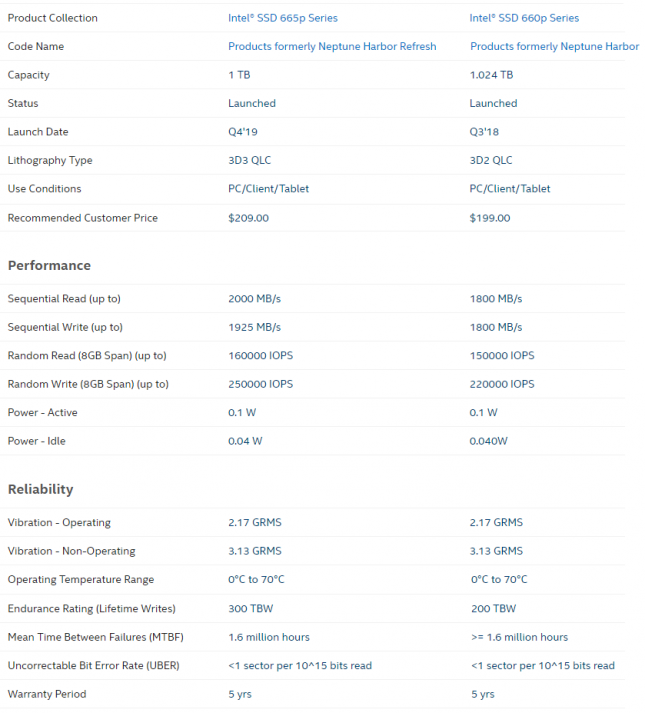 Intel also performed some magic under the hood since they make the customized the firmware used by the SMI 2263EN controller used on this model. Intel has tweaked their Intelligent dynamic write cache to ensure you get the most dynamic cache allowed up until the drive is at 50% used capacity. After the drive is half filled the cache size will gradually decrease down to a fixed static capacity at 75% and it will remain at that cache size. On the Intel SSD 665p 1TB drive the direct to NAND write speed is roughly 185 MB/s, so using up all the available SLC cache will dramatically lower the write speeds of the drive.

The static cache size for the 665p 1TB model is 12GB and the 665p 2TB model is twice that at 24GB. This is important to keep in mind as most review sites test SSDs as empty secondary storage drives and not full of data. We test SSDs as primary drives with just under 200GB of data on them. The Intel SSD 665p 1TB drive has an SLC Cache that is 140GB in size up to 50% used capacity, which means the drives sustained write performance should do well as long as the file being written is smaller than the available SLC cache. Legit Reviews is getting ready to update our SSD test bench and we are thinking about now testing drives that are say 80% full instead of 20% full due to how companies are implementing dynamic cache solutions. 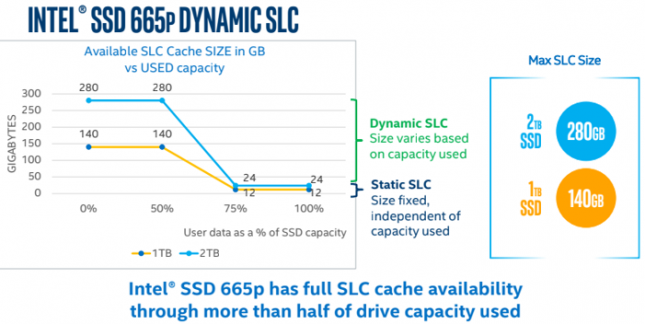 As we already mentioned, the Intel SSD 665p series drives are both backed by a 5-year warranty, but do differ in the endurance rating as the 1TB drive has a 300 TBW rating and the 2TB drive has a 600 TBW rating. The 300 TBW for the 665p 1TB model comes out to being about 164 GB of drive writes per day over the course of five years. This endurance rating is longer than many of the QLC drives on the market today!

The drive that we were sent out to review was the Intel SSD 655p NVMe PCIe M.2 2280 1TB SSD that is sold under part number SSDPEKNW010T9. This exact drive isn’t available from Amazon just yet, but we did find it listed on Newegg for $129.99 shipped, which comes out to be around $0.13 per GB. Intel uses the standard M.2 2280 ‘gum stick’ form factor and the 1TB model is a single-sided drive as you can see from the images above and below.

AES 256-bit hardware encryption and Pyrite 2.0 are both supported by the Intel SSD 665p series if you are wondering about drive security options via encryption. 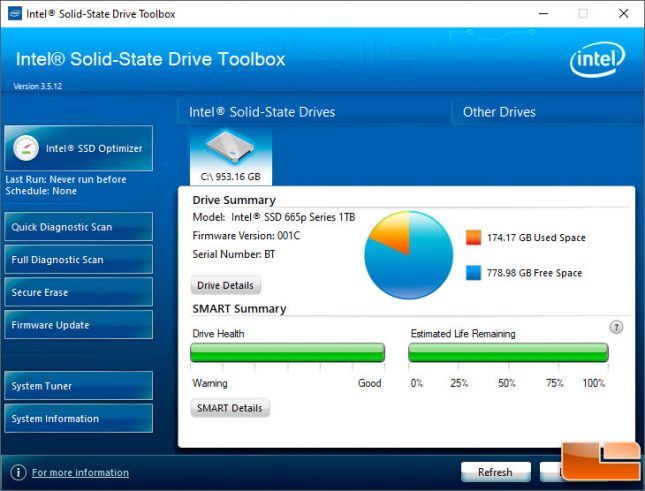 The Intel SSD 665p series also supports the Intel Solid-State Drive Toolbox as of version 3.5.12. We downloaded this free utility to try out as it allows you to do a wide variety of things from checking your drive health to running optimizations. You can even update the firmware with this utility should one ever be released.

You can also download the Intel Data Migration Software utility that allows you to migrate or clone your data from an old hard drive to an Intel SSD using Intel’s licensed version of Acronis True Image. Both of these utilities are free and can be downloaded from Intel. 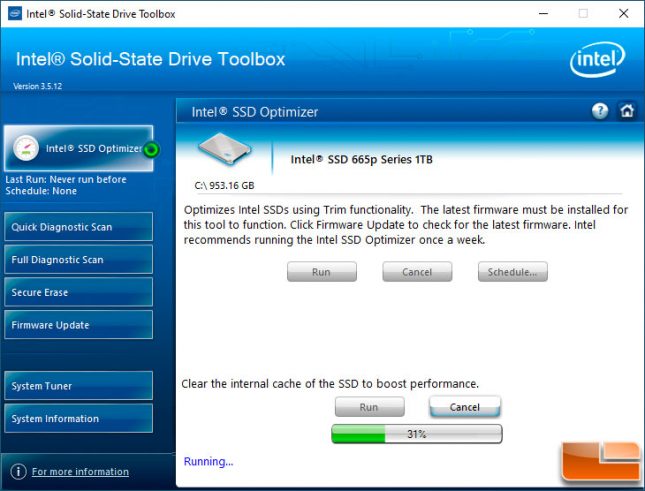