All tests were performed on a fresh and up-to-date install of Windows 7 Pro x64 with no other applications running while using AHCI mode set through the BIOS. The exception to this is when drives are run in a RAID 0 array and obviously the BIOS will be set to RAID mode. Synthetic Benchmarks were run with the OS loaded on a 40GB Corsair Force SSD. In between every test, the drive was secure erased using PartedMagic. As such, all results should be indicative of optimal performance. All components were set to their default speeds and are listed below and we’d like to thank ASUS for their generosity in providing the motherboard for our testing. 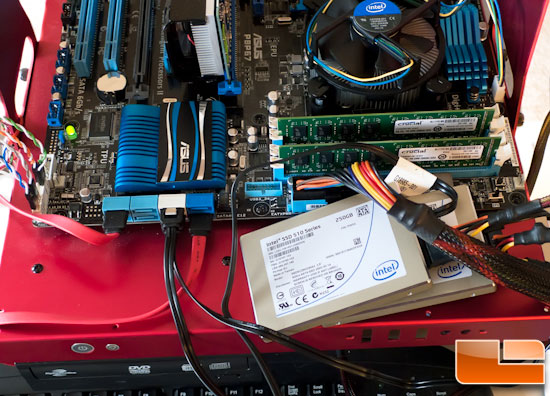 Since there are so many SSDs out there now with different controllers, we started a reference table of which controllers are used by each drive to help you compare results.
Different controllers definitely perform differently and each has various strengths and weaknesses. Like CPU’s, even identical drives will have variations in performance and part of that variance may be attributable to the NAND flash used. Since the tests of the drives listed have spanned different test benches and represent three different interfaces, we have listed them for the synthetic tests as a point of reference even though there is no direct comparison.

In the readout on CrystalDiskInfo 3.10.1, both NCQ and S.M.A.R.T. are
enabled, as is TRIM (when not in RAID mode). This is a great free tool to see what version of
firmware the drive is running in the event there are updates
available. 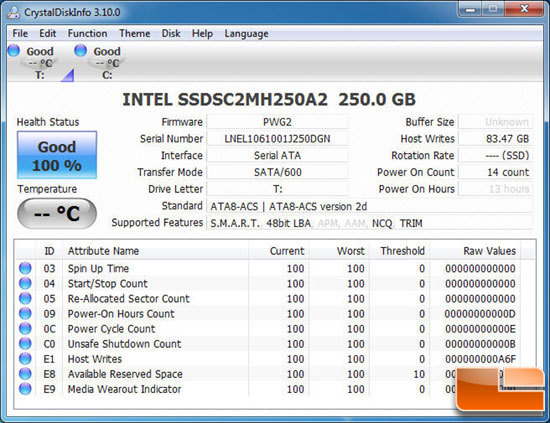 Intel’s toolbox is a great tool that will provide drive status and allow you to secure erase Intel drives from this tool rather than use HDDErase or PartedMagic which require reboots, etc. Here you can see the configuration of the RAID array with the dual Intel drives. 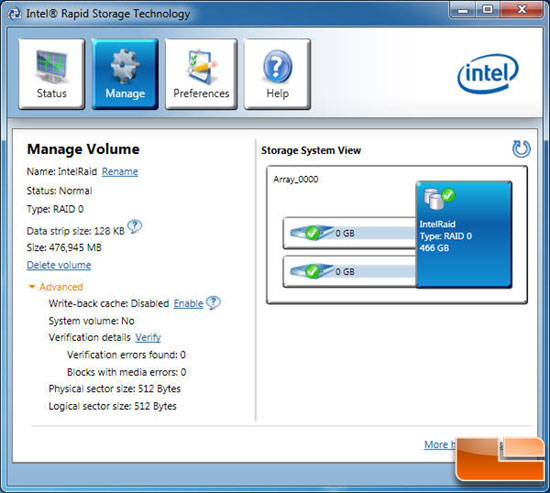