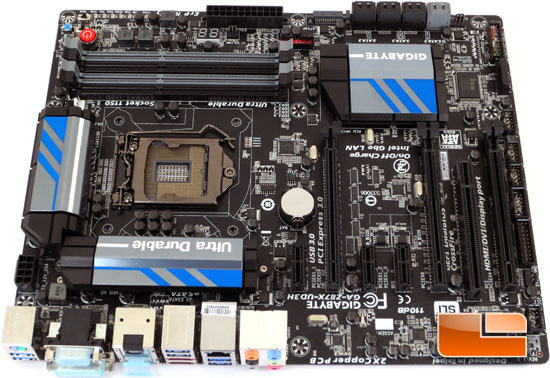 The new look of the GIGABYTE boards is pretty slick. It isn’t overly flashy, and it’s not exactly understated. Overall I think it is a good look. That wouldn’t make me buy it, haven’t found a board yet that makes me want to buy it based on the way it looks. If it doesn’t have the performance it isn’t going in my system! 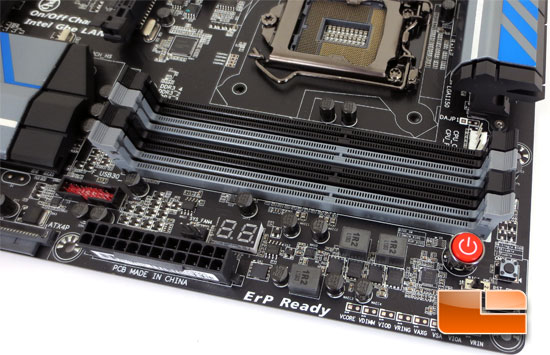 The GIGABYTE Z87X-UD3H features the typical four DIMM slots and will support up to 32GB of DDR3 DRAM. Looking at the corner of the GIGABYTE Z87X-UD3H there is a series of buttons, a power button, reset button, as well as a clear CMOS button. Just above the right side of the four DIMM slots we can see the 4pin CPU fan header as well as the optional CPU 4pin Fan header. Just above the 24pin motherboard power plug there is a 3pin system fan header and the P.O.S.T. code LED just to the right of that. At the lower left hand corner of the DIMM slots we can see an internal SuperSpeed USB 3.0 header. Just along the edge of the Z87X-UD3H we can see a series of voltage check points, here we can check the VCore, VDIMM, VIOD, VRING, VAXG, VSA, VIOA, and VRIN 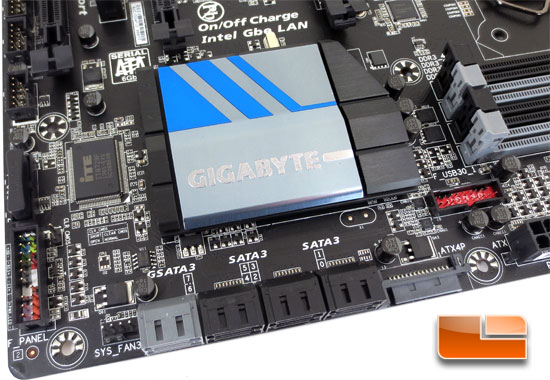 The GIGABYTE Z87X-UD3H features eight SATA ports, each and every one of them is a SATA III 6Gbps, though only six of them are native to the Intel Z87 chipset. The remaining pair are controlled by a Marvell 88se9230 SATA III controller. On the right side of the SATA III ports is a SATA power plug, while this is conveniently placed by the SATA ports, it doesn’t do anything for them. Instead it will supply additional power to the PCIe x16 slots which may be needed when running multiple overclocked GPU’s. To the left of the SATA ports there is a 4pin system fan header. Working our way up the edge of the board we can see the front panel pin-out including the power and reset switches, hard drive activity light, power LED, and the system speaker. Above the front panel stuff we have a second internal SuperSpeed USB 3.0 header, and a handful of internal USB 2.0 ports (three to be exact, but who’s counting). 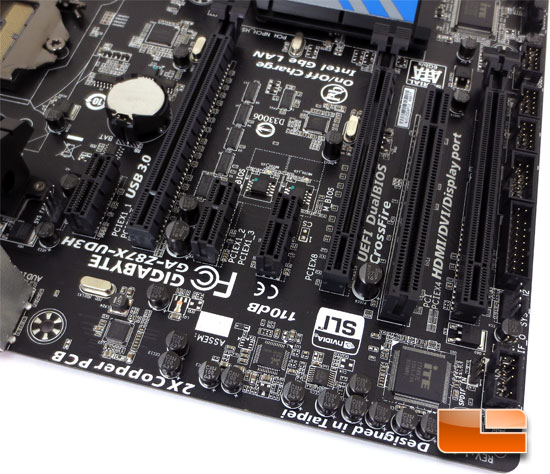 Spinning the GIGABYTE Z87X-UD3H around once again we can pick up where we left off. Just pass the three USB 2.0 headers we have the COM port, T.P.M.(Trusted Platform Module), 4pin system fan header, SPDIF out, and the front panel audio header, and the SPDIF in. Rounding the corner of the Z87X-UD3H we can catch a glimpse of the shiny new durable black solid capacitors as well as several of the IC’s that make up the sub-systems of the board. The first and most noticeable is the ITE IT8892E PCI bridge chip. Continuing to the left we can find the Realtek ALC898 high definition audio codec, and what should be the Intel I217-V Gigabit Ethernet controller. The GIGABYTE Z87X-UD3H features 3 PCIe x16 slots that will support 2-way NVIDIA SLI, or 3-way AMD CrossFireX. Just in case you were wondering why the Z87X-UD3H doesn’t support 3-way SLI, the third PCIe x16 slot runs at x4 borrowing lanes from the CPU, NVIDIA won’t support SLI in configurations that utilize a x4 slot. In order for the Z87 chipset to support 3-way SLI a PLX chip would need to be added to the mix to supply additional PCIe lanes. In addtion to the 3 PCIe x16 slots there is three PCIe x1 slots as well as a PCI slot. 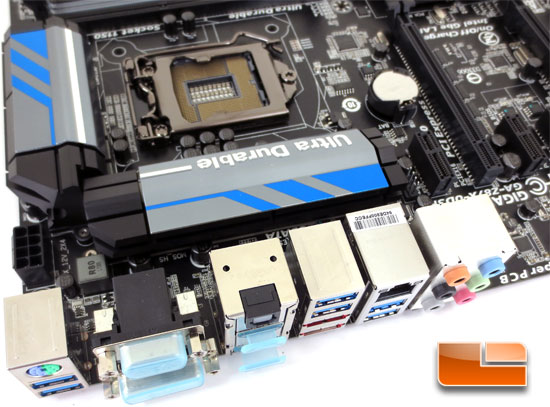 The GIGABYTE Z87X-UD3H features a single 8pin CPU power plug, though you can get away with a single 4pin power plug if that is all your power supply has. 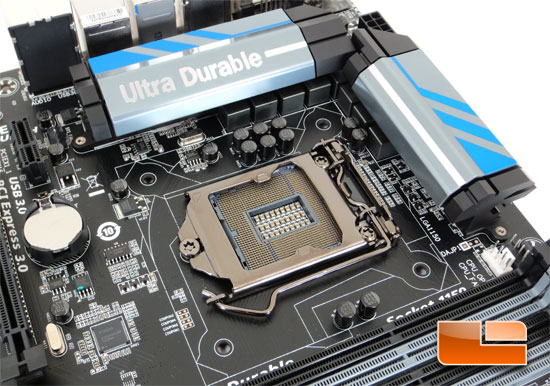 The area around the latest Intel LGA1150 socket is pretty wide open. On the outskirts we have the heat sinks to keep the PWM’s cool during those long nights of gaming. Just under the edge of the heat sinks we can the eight chokes that make up the power phases on the GIGABYTE Z87X-UD3H.

The I/O panel of the GIGABYTE Z87X-UD3H Intel Z87 motherboard doesn’t feature any of those pesky old school USB 2.0 ports, nothing but the latest SuperSpeed USB 3.0 ports here, six of them to be exact. All driven by the Intel Z87 chipset through a Renasas uPD720210 4-port USB 3.0 hub controller. In addition to the six USB 3.0 ports, we also have a 15pin D-Sub VGA port, DVI, HDMI, DisplayPort, a pair of eSATA ports, six 3.5mm audio jacks, and an optical SPDIF out port.