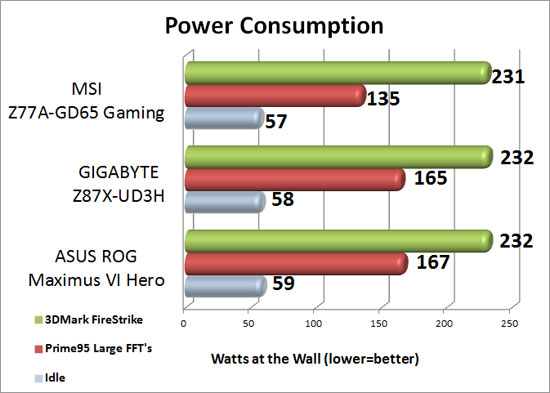 Benchmark Results: Power consumption was pretty constant across the board with the exception of the Prime95 load. At idle the boards ranged between 57 and 59 Watts at the wall with the GIGABYTE Z87X-UD3H falling in the middle at 58 Watts. Running 3DMark Firestrike our two Intel Z87 boards were both pulling a peak of 232 Watts while our Intel Z77 system was 1 Watt lower at 231. Prime 95 gave me the opposite results of what I expected, the MSI Z77A-GD65 Gaming motherboard with the Intel Core i7 3770K ‘Ivy Bridge’ processor pulled only 135 Watts at the wall, The GIGABYTE Z87X-UD3H and ASUS Maximus VI Hero were pulling 30 Watts more at the wall! It was expected that the latest and greatest would be more power efficient, but our results show different. It could have something to do with early BIOS revisions compared to a much more mature BIOS build for the Intel Z77 Platform, or it could simply be the way that Prime95 loads up the different processors.