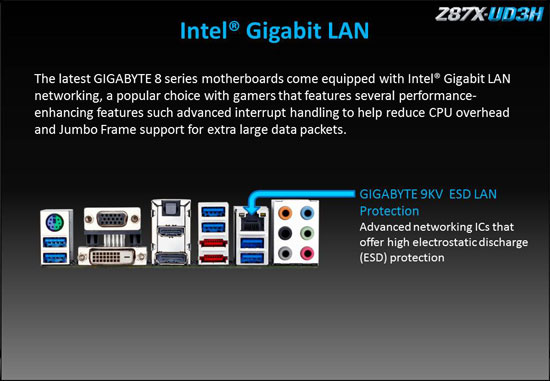 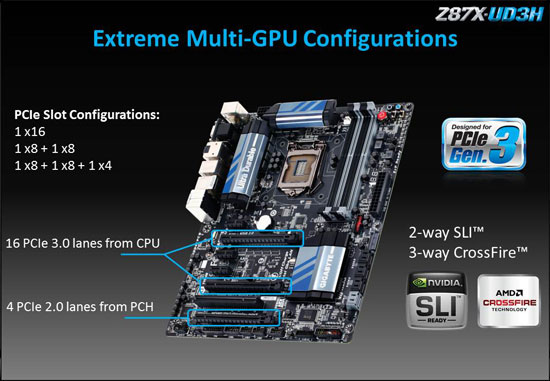 The GIGABYTE Z87X-UD3H will support 2-way NVIDIA SLI and 3-way AMD CrossFire. Of course all of the PCIe x16 slots are running PCIe Gen3 as well. 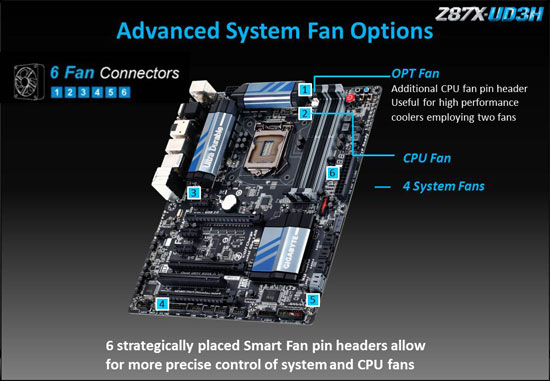 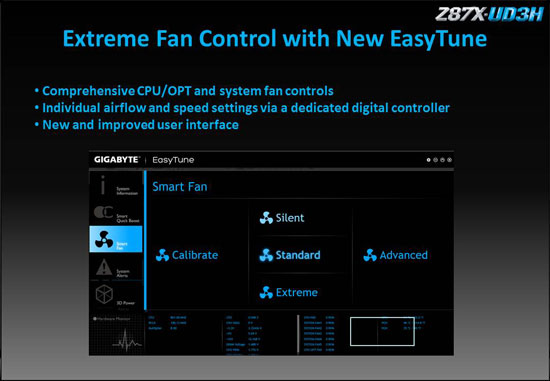 The new GIGABYTE EasyTune software has some serious fan control options for you to use. It’s always nice to silence the fans when watching a movie or increase the cooling during those extended nights of gaming! 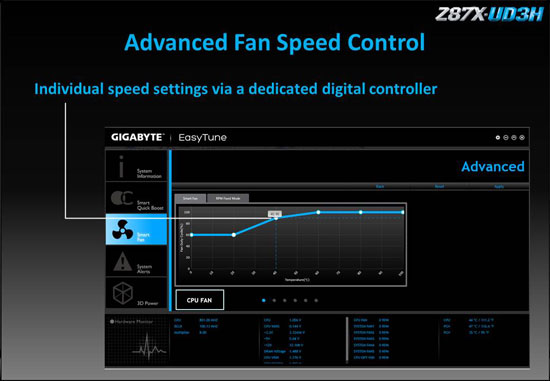 The EasyTune software allows you to tune each individual fan connected to the various fan headers. 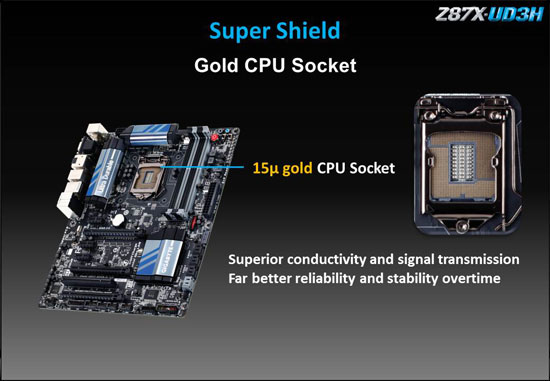 The Intel LGA1150 socket on board the GIGABYTE Z87X-UD3H features 15 μ Gold Contacts. This translates to .000381mm of gold plating, offering better conductivity and protection. 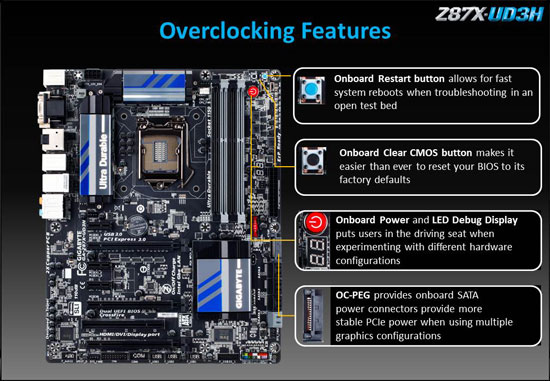 The GIGABYTE Z87X-UD3H features three of the usual buttons that we find on many of the motherboards these days, Power, Reset, and an onboard clear CMOS. If you’re doing some serious overclocking of multiple graphics cards you may need a little extra power delivered to the PCIe x16 slots, to achieve this GIGABYTE has a SATA power connector next to the SATA ports that will deliver additional power. 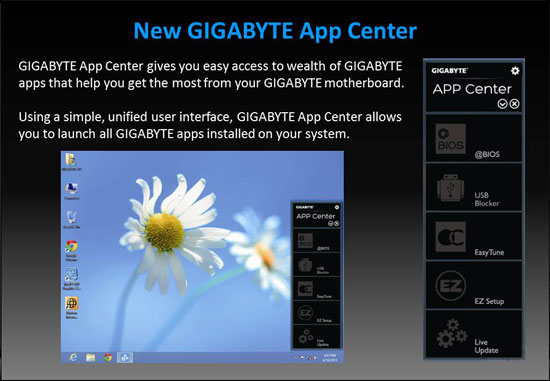 With the launch of the GIGABYTE 8 series, it seems they are also revamping their software. GIGABYTE now has an App center that will centralize all of the GIGABYTE software on your system. Above we can see that there is everything from the @BIOS, USB Blocker, EasyTune, EZ Setup, and Live Update. There just might be something to the App Center. 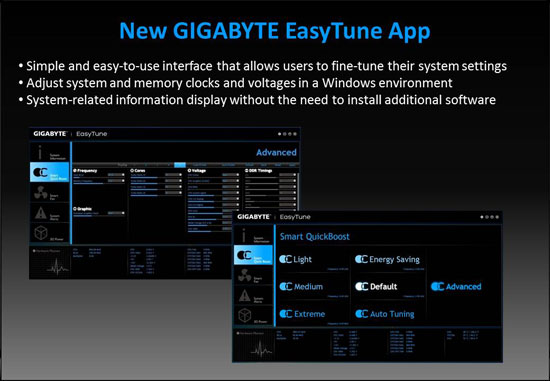 The EasyTune App allows us to tweak our system to get the most out of it. We can do this manually with individual system settings, or as a Smart QuickBoost. The QuickBoost can range from Light, Energy Saving all the way to Extreme or an Auto Tuning session. We will certainly be checking these settings out later in the day! 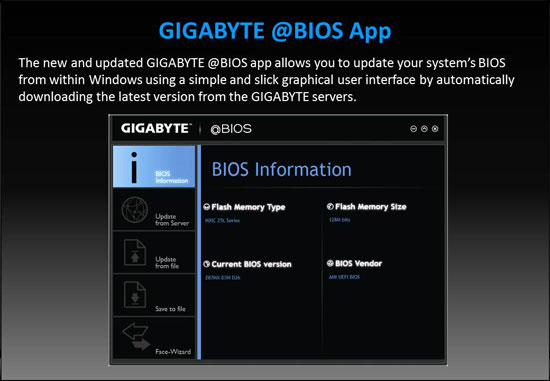 I have used the @BIOS before and have never had any issues, haven’t used this version yet but I don’t foresee any problems with it either. 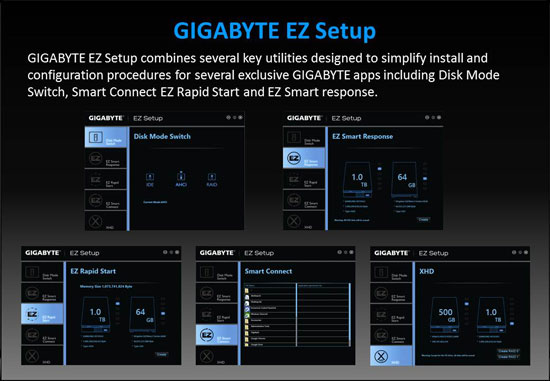 GIGABYTE has an EZ Setup that will allow us to change several of the system settings like the Disk Mode, Smart Response Technology, Rapid Start, Smart Connect, and XHD (Extreme Hard Drive). 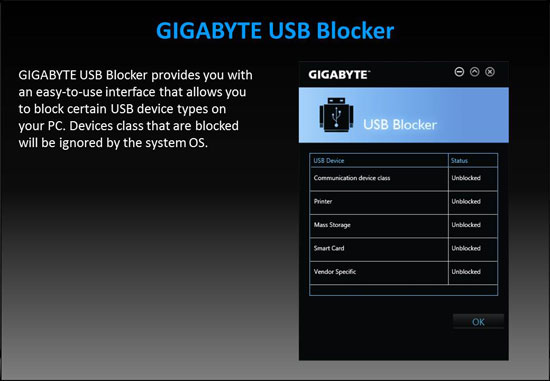 We also have access to GIGABYTE USB Blocker. This app will allow the system to block certain USB Devices by the system. 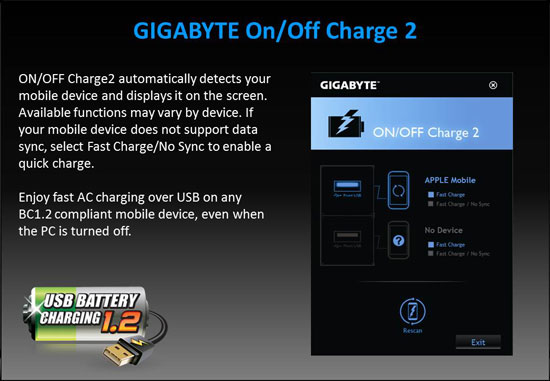 GIGABYTE On/Off Charge 2 will automatically pop up when you plug your smart phone or tablet in and give you any available functions for that particular device. 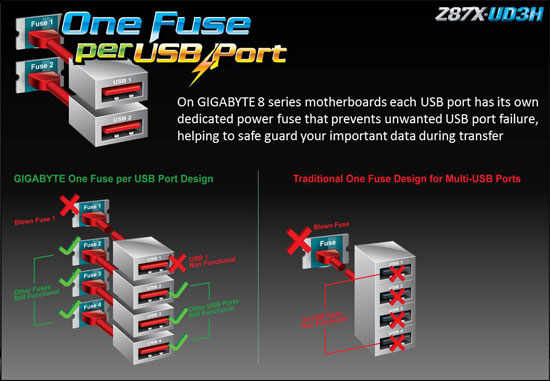 Once again we can see how the USB ports are laid out with a single fuse per USB port. This prevents losing all of the USB ports if the fuse blows, we will only lose the single USB port tied to that particular fuse. 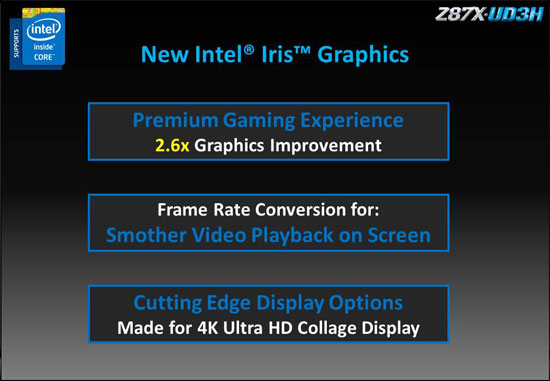 The new Intel Iris graphics will offer up to 2.6 times the performance of the previous generation for gaming, offer frame rate conversion for a smoother video playback. The most impressive aspect to me is the support for the latest 4K Ultra HD Collage Display. 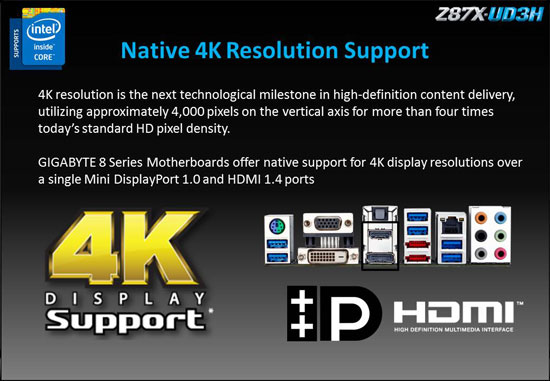 If you’re fortunate enough to have been an early adapter to the latest 4K resolution, you’re in luck. The GIGABYTE Z87X-UD3H natively supports that resolution on both the Mini DisplayPort 1.0 and HDMI 1.4 ports on the I/O panel. 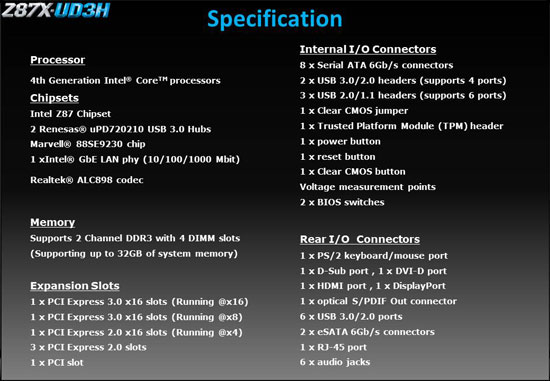