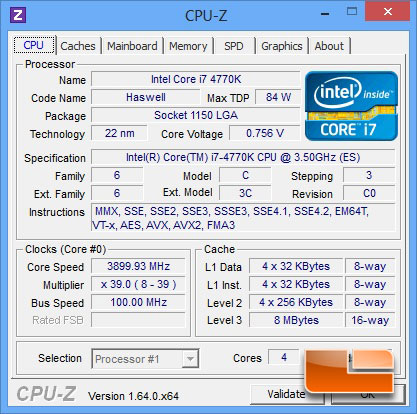 The Intel Core i7 4770K runs at a non-turbo speed of 3.5GHz and turbo will ramp the processor up to as high as 3.9GHz as we can see above. Since we are using a K series processor which has an unlocked multiplier we will be able to increase the default x35 multiplier to achieve our overclock today. This is the easiest way to overclock K series processors and should provide us with some great speeds. 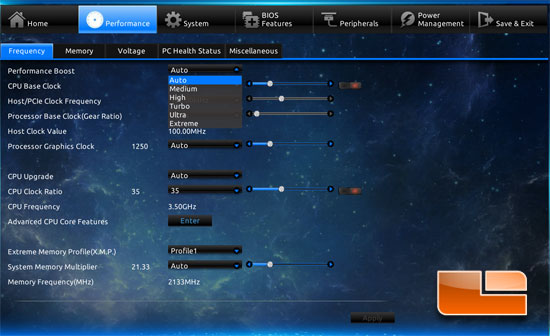 The GIGABYTE Z87X-UD3H has several different options that we can play with in the BIOS, and I decided to just go for broke with the extreme setting. We were running a little blind on this one, this is the first run with our Intel Core i7 4770K and overclocking and weren’t quite sure what to expect. Once we selected the Extreme setting we saved our settings and exited the BIOS. 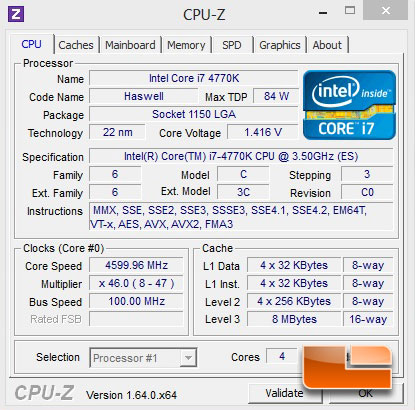 First thing we needed to do was to see how fast our processor was running and I was happy to see that it was running comfortably at 4.7GHz! 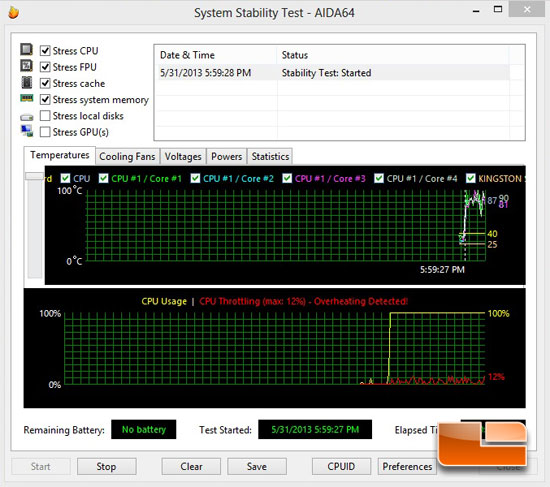 Curious as to how stable the system was I fired up the System Stability Test in AIDA64, right off the bat we spiked our temperatures and started seeing the CPU throttling down. The GIGABYTE Z87X-UD3H set the vCore of our Intel Core i7 4770K at 1.417! This caused our chip to run to hot even for our Corsair H100i AIO Water cooler. The vCore was to high so without changing anything else in the BIOS I backed the vCore down to 1.25 for a starting point. 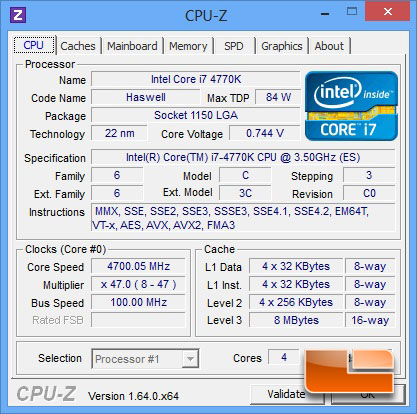 It turns out that 1.25 vCore was enough to boot the GIGABYTE Z87X-UD3H into Windows without an issue, but as always, the million dollar question is: Is it stable?! 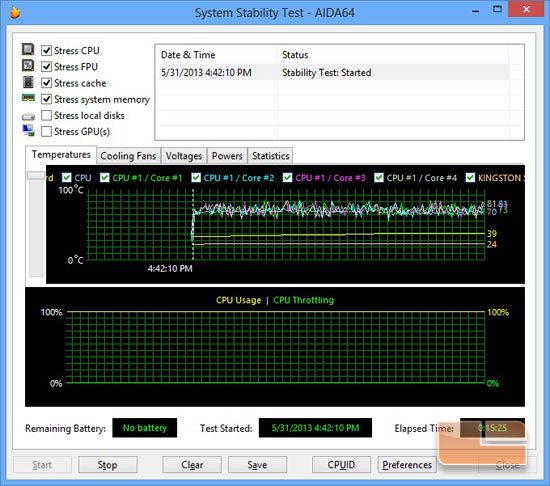 Firing up AIDA64 once again we ran the stability test for 15 minutes without any issues or hiccups. While this isn’t the most definitive test of stability, it is a good indicator if the system doesn’t crash under a heavy load like this. 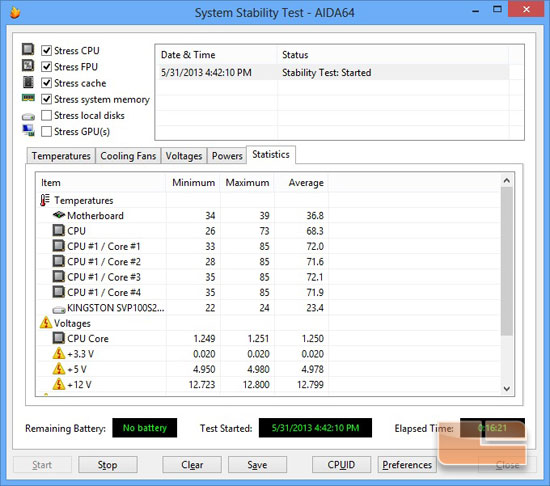 I tried pushing the Intel Core i7 4770K beyond the 4.7GHz mark, nothing that I did was making any difference. We increased the vCore to 1.3 and started seeing core temperatures higher than I would like to.  We may play with a little redneck cooling in the near future just to see if we can get a little further and see how much it would take. 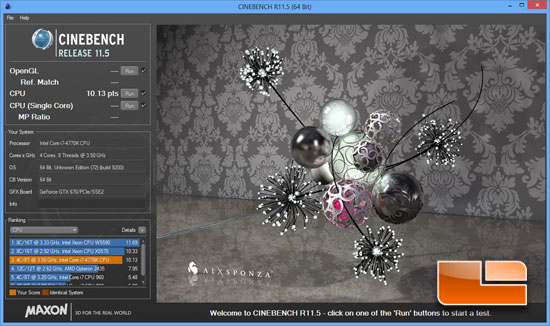 We fired up Cinebench at 4.7GHz under both settings. Running at the extreme preset as is we scored 10.13 points in Cinebench. 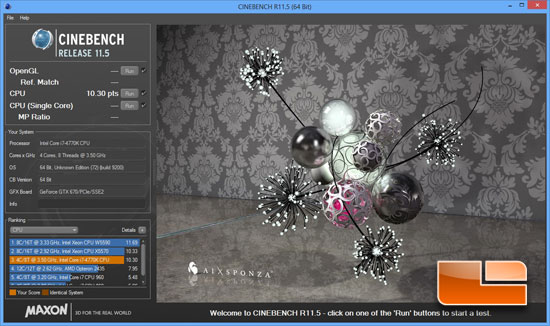 Once we reduced the CPU vCore on our Intel Core i7 4770K our temperatures dropped and we did get any of the scaling that we were getting. With our the throttling down of the CPU our score jumped to 10.3. 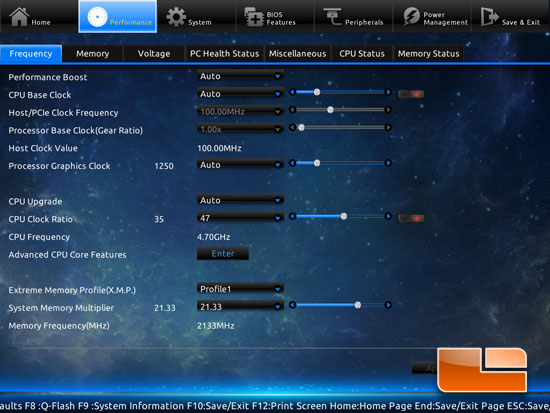 On the Frequency page of the GIGABYTE UEFI BIOS the only settings that are different than the defaults are the CPU Clock Ration which we have set at x47 and the Extreme memory Profile (X.M.P.) which is set to Profile 1. 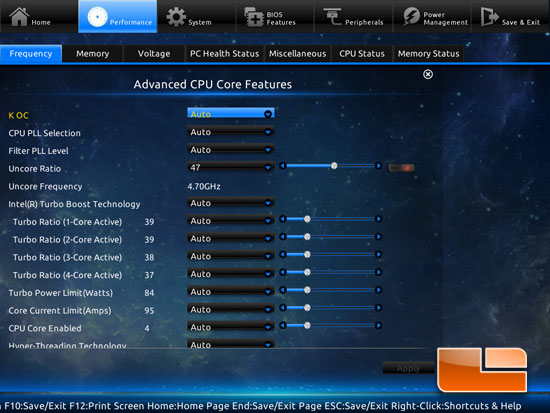 We kept our Uncore Ratio at 1:1 with our CPU Core ratio and set it at x47. If you have this board and CPU combination give these settings a try, if they work for you Great! Let us know, if not, be sure to let us know what did work for you.