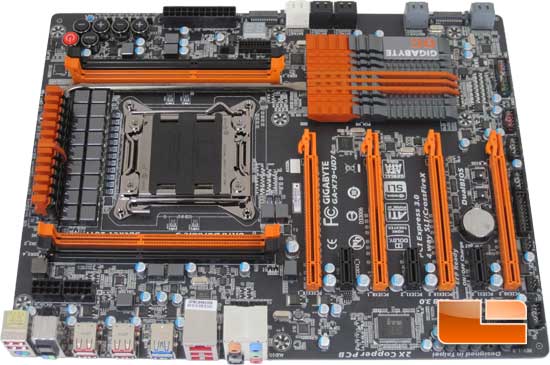 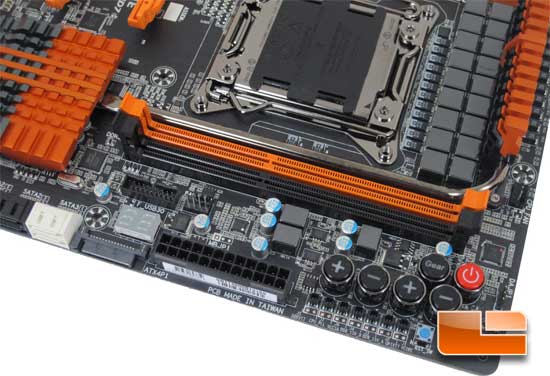 The first corner of the GIGABYTE GA-X79-UD7 has a lot going on. We will start out with the basic features to get them out of the way. Probably first and foremost is the pair of DIMM slots. GIGABYTE has equipped the GA-X79-UD7 with only four DIMM slots total (the remaining pair are on the other side of the LGA2011 socket). Many of the high end Intel X79 motherboards are being equipped with eight DIMM slots. Is four DIMM slots enough for most people? At the present time I would bet yes. With Windows 8 on the horizon and programs and games benefiting from massive amounts of memory, the future may say otherwise depending on how often you upgrade. For now though the four DIMM slots that will support memory up to 2133MHz and 8Gb sticks for a total of 32Gb in quad channel architecture should suffice for most. Just below the DIMM slots we can find the front panel SuperSpeed USB 3.0 along with a four pin fan header as well as the onboard debug LED. Along the corner of the board we have the OC-Touch buttons. The red button is the onboard power button, the little blue one is the restart button. The OC-Touch has two sets of +/- buttons, the pair on the left is a real time CPU multiplier change, the pair on the right is to adjust the Bclk. The Gear button next to the power button will switch the Bclk adjustment between 1MHz and .1MHz. This is the most comprehensive set of onboard buttons that I have see to date. Below the OC-Touch buttons is a series of voltage check points which is also part of the OC-Touch. Through the OC-Touch voltage checkpoints we can check the DDR VTT, CPU PLL, VCCSA, DDR 1.5V B, DDR 1.5V A, QPI VTT, as well as the CPU VCore. 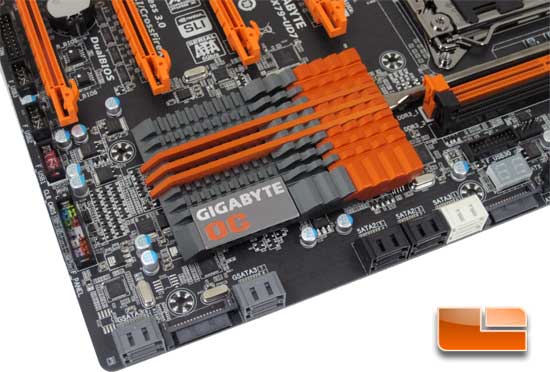 The GIGABYTE GA-X79-UD7 Intel X79 motherboard features a grand total of 10 SATA ports. Six of the ten SATA ports are SATA III 6Gbps. The white pair of SATA III 6Gbps ports are controlled by the Intel X79 express chipset while the two sets of grey SATA III 6Gbps ports are controlled two separate Marvell 88SE9172 SATA III controllers. Between the two sets of Marvell SATA III 6Gbps ports and to the right of the Intel X79 SATA III 6Gbps ports is a SATA power adapter. The SATA power adapters will deliver additional power to the PCIe x16 expansion slots. Rumor has it that the SATA power adapters are much easier to seal when not being used during extreme overclocking sessions with liquid Nitrogen. Working our way up along the left edge of the board we can find the front panel header, and three sets of internal USB 2.0 headers. The first of the three USB 2.0 headers is the header that needs to be used for the 3x power boost. Just to the right of the front panel header is a pair of pins to reset the CMOS. A quick note on the clear CMOS, it doesn’t come with a jumper. In order to clear the CMOS with this pinout, you will need to jump it with a jumper from somewhere else or you can use my method, a screwdriver. Just be careful not to damage the PCB or surrounding components if you use my Neanderthal method. 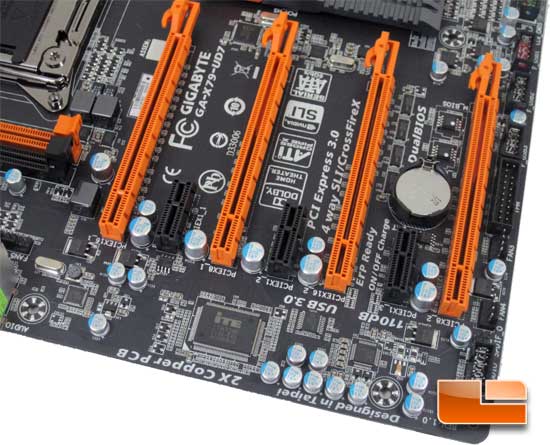 Spinning the GIGABYTE X79-UD7 around and picking up where we left off, we can see the internal header for the T.P.M.(Trusted Platform Module), and a pair of four pin fan headers. Barely visible on the corner of the X79-UD7 is the SPDIF out and front panel audio header. The layout of the expansion slots is very solid. There is enough room to run four dual slot graphics cards in either NVIDIA four way SLI, or four way CrossFireX! Though you will need a beast of a case to run that setup! The four PCIe x16 slots are all conform to the PCIe 3.0 standard. The three PCIe x1 slots all conform to the PCIe 2.0 standard. Along the edge of the GIGABYTE X79-UD7 we can see the Realtek ALC898 high definition audio codec, the iTE IT8728 I/O controller, and the 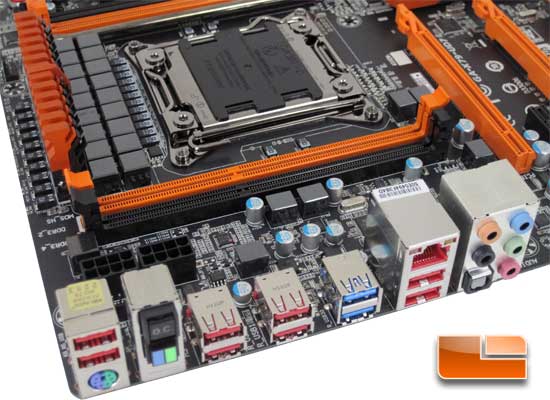 The final corner of the GIGABYTE GA-X79-UD7 presents us with the I/O panel. The I/O panel of the GIGABYTE GA-X79-UD7 features a grand total of ten USB ports, two SuperSpeed USB 3.0 and eight USB 2.0. There is a single PS/2 port for a keyboard or mouse, OC Button, DualBIOS switch, a clear CMOS button (hidden below the DualBIOS button), Intel Gigabit LAN, optical SPDIF out, and five audio jacks. Behind the I/O panel we can see that GIGABYTE has included dual 8 pin CPU power plugs to deliver massive power to the CPU when overclocking.