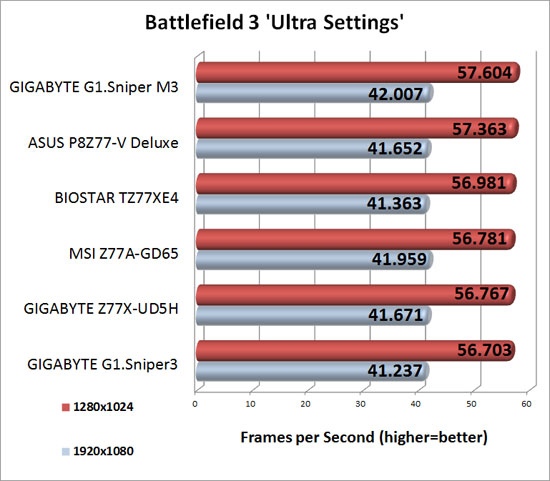 Benchmark Results: In Battlefield 3 the GIGABYTE G1 Sniper M3 and the GIGABYTE G1 Sniper 3 were at the opposite ends of the charts. The Sniper M3 mATX motherboard took the top spot with an average of 57.604 frames per second at 1280×1024 and an average of 42.007 frames per second at 1920×1080. The Sniper M3 was at the bottom of the charts with an average frame rate of 56.703 at 1280×1024 and 41.237 at 1920×1080. This is a difference of less that 2% between all of the Intel Z77 motherboards. This is well within an acceptable margin of error since Battlefield 3 is benchmarked using FRAPS to record the framerates.
Questions or comments? View this thread in our forums!