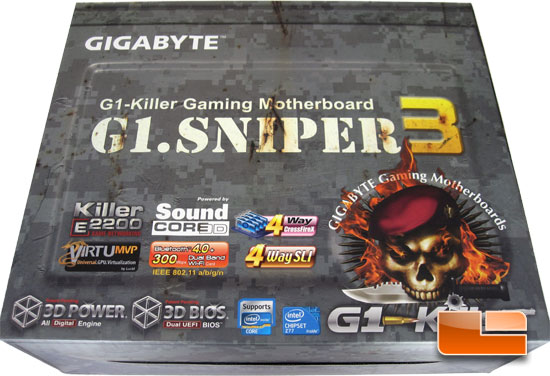 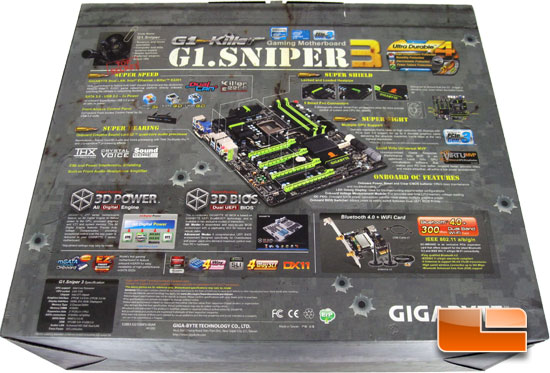 The back of the retail packaging for the G1.Sniper3 Intel Z77 motherboard goes into detail on the features listed on the front. It also points out the ‘Super’ features; Super Speed, Super Hearing, Super Sight and Super Shield. 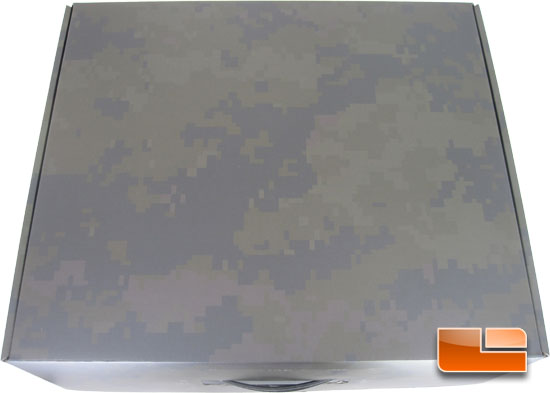 Removing the out shell of the GIGABYTE G1.Sniper3 motherboard packaging we are presented with a much heavier duty camouflage box. This box provides the bulk of the protection during the shipping and handling hazards. 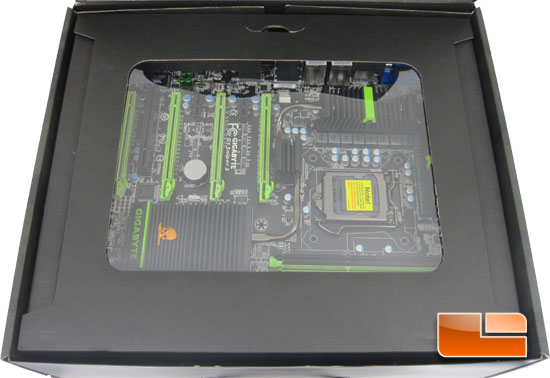 Opening up the box we can catch the first glimpse of the GIGABYTE G1.Sniper3 motherboard. For me the first impression is a good one, more on that later though. 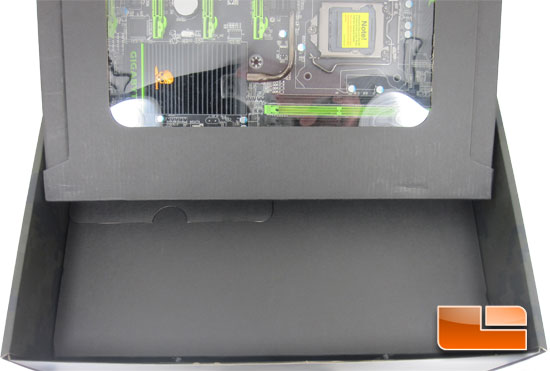 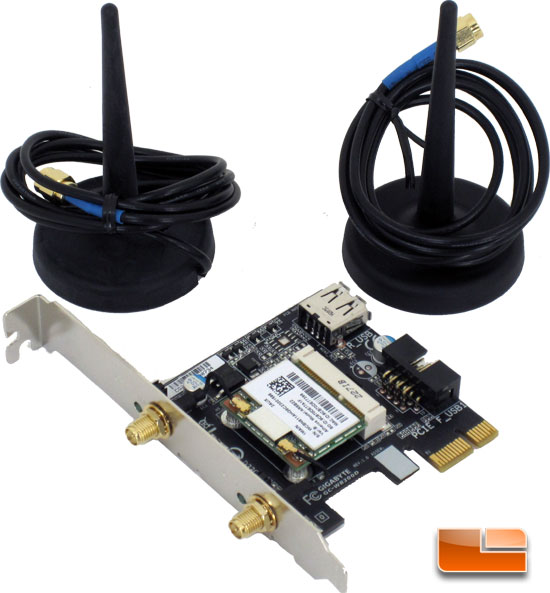 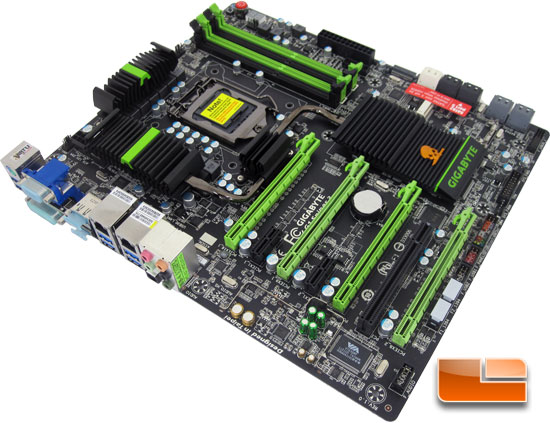 I mentioned previously that the first impression of the GIGABYTE G1 Sniper 3 was a good one. When we have previously looked at the G1 Killer series of motherboards they have had heatsink assemblies that were rather, well cheesy. This time around GIGABYTE went with a much more conservative approach and I applaud them for it. The new G1.Sniper3 still features the black and green look to it, but much less gaudy without the heatsinks modeled off of firearms. 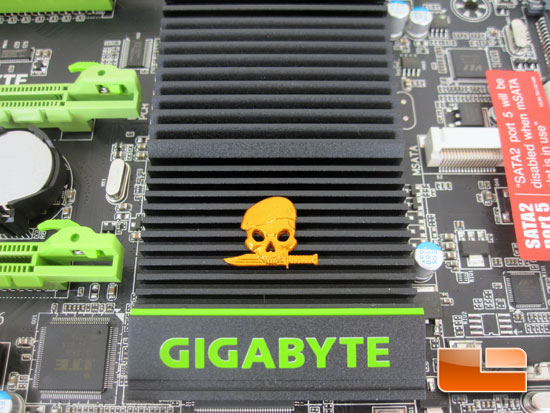 The GIGABYTE G1.Sniper3 heatsink on the Intel Z77 chipset may not be fashioned like a magazine, but it will still leave an impression. The actual heatsink is black with bright green lettering and highlights. What will leave the biggest impression is the bright orange GIGABYTE G1 Killer skull. Whether this is meant to strike fear into your opponents or just add a touch of killer style to the board I think it is much better than the previous generation G1 Killer motherboards! 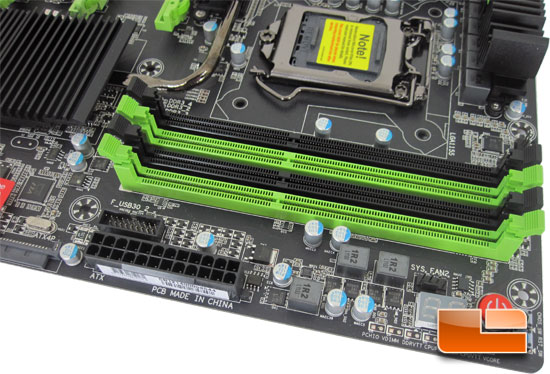 The GIGABYTE G1.Sniper3 will support four 1.5V DDR3 DIMMS up to a total of 32GB of system memory in a dual channel memory architecture. If your looking for some speed, the G1.Sniper3 has you covered as it will support memory with speeds up to 2666MHz! Looking at the corner of the G1.Sniper3 we can see the onboard power, reset and clear CMOS buttons. Next to the power button we have the debug LED display while the series of voltage check points are immediately below that. Just above the 24 pin motherboard power we have one of the two internal SuperSpeed USB 3.0 headers. 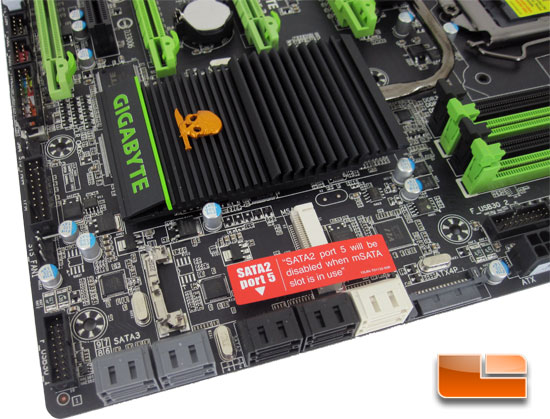 Rotating the GIGABYTE G1.Sniper3 Intel Z77 motherboard around we can see that we have a plethora of SATA connectors. Looking at the SATA ports from left to right we have the pair of Intel Z77 SATA III 6Gbps ports, four SATA II 3Gbps ports (Intel Z77 chipset), and four SATA III 6Gbps ports controlled by a pair of marvell 88SE9172 SATA III controller chips. Behind the SATA ports we can see the onboard mSATA slot. This is designed to take advantage of the Intel Smart Response Technology (SSD Caching). If you do take advantage of the mSATA port be aware that it will disable the SATA II port 5. Rounding the corner of the GIGABYTe G1.Sniper3 we can see the other internal SuperSpeed USB 3.0 header, a 4pin fan header, TPM (Trusted Platform Module), and another 4pin system fan header. Just beyond the fan header, we can see a switch labeled SW4. The SW4 switch is the switch that will toggle us between the main BIOS and the backup BIOS. 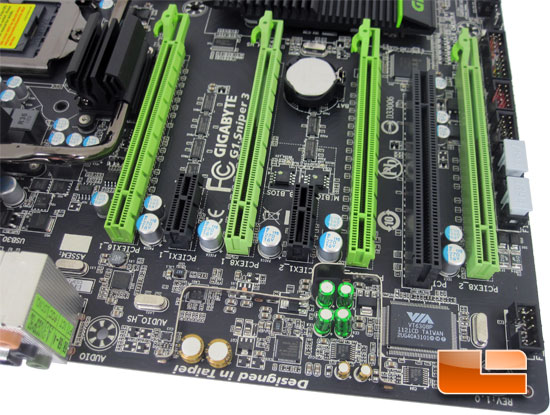 Continuing down the edge of the GIGABYTE G1.Sniper3 Intel Z77 motherboard we can see the pinout for the front panel connectors, a pair of internal USB 2.0 headers. The first of the two internal USB 2.0 headers (red) is the one designed for GIGABYTE’s on/off charge technology. Beyond the USB 2.0 headers we have a pair of IEEE 1394a (Firewire) internal headers. GIGABYTE places a cover over the IEEE 1394a headers to help us recognize them as firewire rather than USB 2.0, the headers look quite similar between the two technologies. Buried in the corner we have the header for the front panel audio. Rounding the corner, we can see the VIA VT6308P IEEE 1394a controller. Among the most critical features that separates the G1.Sniper3 from the pack is the Creative Soundblaster audio that is integrated onto the board. That area of the board is distinguished by the metal trim that starts next to the VIA firewire controller. The G1.Killer series of motherboards has never used the much more common Realtek audio solution that we have found on most of our boards. This is the key component to the GIGABYTE ‘Super Hearing’. The GIGABYTE G1.Sniper3 has no shortage of expansion slots. The G1.Sniper3 is capable of running 4way/3way/2way NIVIDIA SLI and AMD CrossFirex technologies. 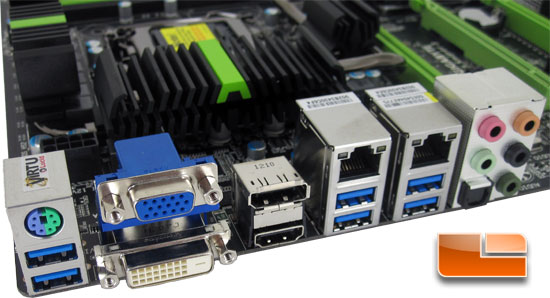 Looking at the I/O panel on the GIGABYTE G1.Sniper3 we can see that we have plenty of SuperSpeed USB 3.0 ports back here, six of them to be exact. If you plan on using the onboard video, you can connect with VGA, DVI-D, DisplayPort, or HDMI. The GIGABYTE G1.Sniper3 offers two different network solutions, the left RJ45 jack is powered by an Intel 82579V Gigabit Ethernet controller. The RJ45 on the right is the Qualcomm Atheros Killer E2200 LAN chip.