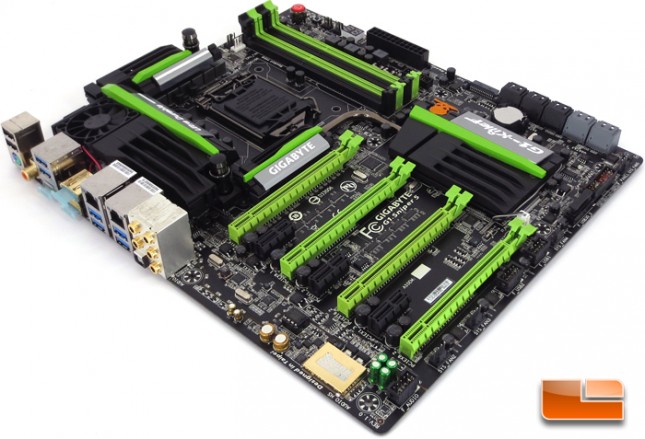 For years GIGABYTE has been among the best of the best when it comes to motherboards and other computer components. Today we will have the pleasure of looking at one of their flagship products, the G1.Killer Sniper 5 motherboard. The G1.Sniper 5 is a beast of a board, both in features and size. Before we delve to far into the features, it’s certainly worth mentioning that the G1.Sniper 5, like it’s predecessors carries a pretty steep price tag. Right now you can find the GIGABYTE G1.Sniper 5 for as little as $339.99 shipped after a $50 rebate, it’s a hefty price tag but keep in mind this board should be among the best of them!

As mentioned above, the GIGABYTE G1.Sniper 5 is packed with features so you’re getting quite a bit for your money. For starters, while not the most exciting features of the Sniper 5, at the heart of the board is the latest Intel Z87 chipset and LGA1150 socket. This means that we need to use the latest Intel ‘Haswell’ processors like the Intel Core i7-4770K we use in our test bench. Though if you wanted to, you could use any of the Intel processors in the LGA1150 package on the Sniper 5 motherboard, but using a sub-$100 processor on a $339.99 motherboard seems a bit wrong to me, but to each their own. Since the GIGABYTE G1.Sniper 5 is using the latest Intel Z87 chipset, that means all the bells and whistles that are part of the chipset are available to use. Some of the features included with the Intel Z87 chipset include six SATA III 6Gbps ports, native SuperSpeed USB 3.0 at both the I/O panel and front panel, PCIe x16 Gen 3 slots, dual channel memory, and a host of power saving features on the board.

Much of what I have mentioned so far is available on just about all of the Intel Z87 motherboards out there. The GIGABYTE G1.Sniper 5 begins to separate itself from the crowd when we delve deeper into the more GIGABYTE specific features for enthusiasts. Looking at the photo of the Sniper 5 above, one of the most notable features that stands out like a crotch rocket at Sturgis is the expansion slots. The Intel Z87 chipset supports only 16 PCIe 3.0 lanes, in order to supply enough PCIe x16 lanes for the ability to run four graphics cards in SLI and CrossFireX GIGABYTE employed a PLX technology PEX8747 chip. 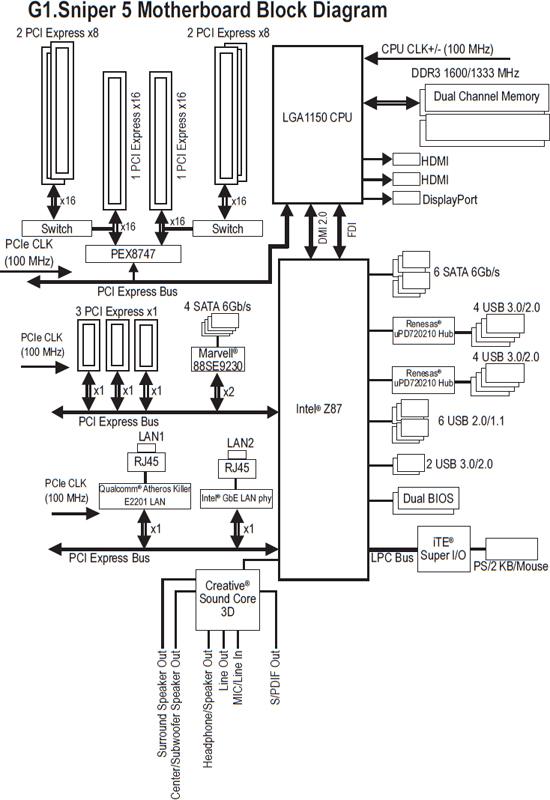 The PEX8747 adds an additional PCIe lanes to the primary two PCIe x16 slots allowing them both to run at x16 when populated. A more traditional board without a PLX chip allows two cards to only run at x8 when both slots are in use. If you’re choosing to run 3-4 graphics cards on the GIGABYTE G1.Sniper 5 the primary PCIe x16 slots share their lanes with the remaining two slots for a x8,x8,x8,x8 configuration.

If you’re the kind of computer enthusiast building a custom rig with an enthusiast level board like the GIGABYTE G1.Sniper 5, water cooling certainly isn’t out of the question for you. If you’re going pedal to the metal with your build with a full blown custom water cooling loop, the Sniper 5 is ready to rock. The heatsink assembly over the PWM circuitry is already set-up with a water block integrated into the design! If you’re not looking to water cool no worries, the assembly works well without the water as well.

One of the features that GIGABYTE has really been excited about is the ability to ‘hear’ your opponents before you can see them in game. GIGABYTE prides themselves on the audio quality of their G1.Killer series of motherboards. To keep up the quality, GIGABYTE is utilizing a Creative Sound Core3D audio processor. The Sound Core3d audio processor is a multi-core sound and voice processor that offers high performance sound processing. To add to the quality of the Sound Core3D the Sniper 5 as well as all GIGABYTE 8 Series G1.Killer motherboards include the SoundBlaster with SBX ProStudio suite. On the hardware end, GIGABYTE is using all high quality parts including Nichicon high end audio capacitors front headphone amplifier, and an audio noise guard. The Audio Noise Guard is a path on the PCB around the audio components that doesn’t have any traces running through it. This helps insulate the audio components from the EMI from the rest of the board.

GIGABYTE has recently designed their top-tier boards with the ability to swap out one of the audio components. The GIGABYTE AMP-UP Audio socket gives the audiophile computer enthusiast the ability to swap out the onboard operational amplifier (OP-AMP). Doing this can bring a whole new level of audio customization to your gaming experience. The G1.Sniper 5 motherboard includes two separate OP-AMPs as well as the IC extractor needed to swap them out.