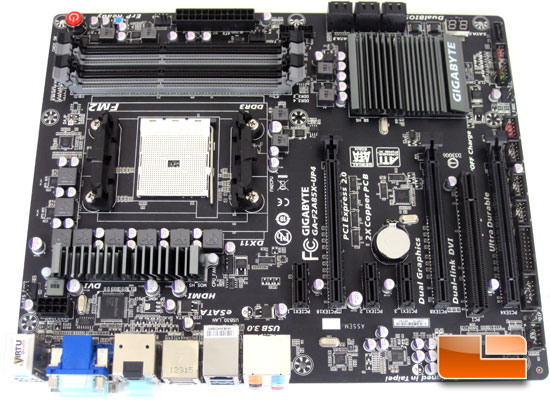 The GIGABYTE F2A85X-UP4 is one of the lucky boards to be blacked out. While some say it’s overdone, it’s still a good look that will fit in with most case designs. I’m not one to base my purchases off of what the board looks like, but it certainly doesn’t hurt to look good. 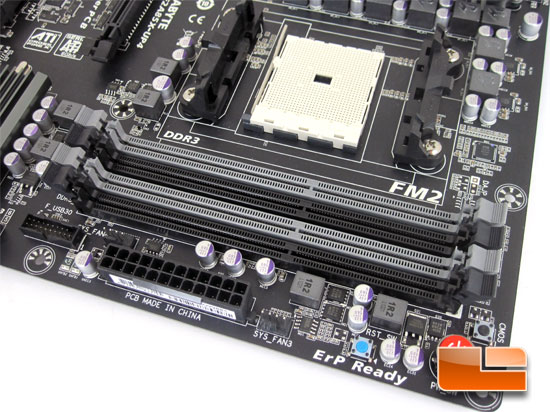 Taking a closer look at the GIGABYTE F2A85X-UP4 and the surrounding area, there are a few things that stand out. On the corner of the board we have three buttons, the big red one is the power button (call me captain obvious), the small blu one and the small black one are the reset switch, and the clear CMOS button. Truth be told, there were a couple of times during my time with the GIGABYTE F2A85X-UP4 FM2 motherboard that I nearly hit the clear CMOS button rather than the reset switch. It may simply be a case of the I D 10 T error when I hit nearly hit the wrong button, but I do wish that the buttons were a little less similar and better marked. Moving along the edge of the GIGABYTE F2A85X-UP4 PCB, we can find the 24pin motherboard power, as well as the internal SuperSpeed USB 3.0 header. I do like the fact that GIGABYTE went off the beaten path with the USB 3.0 header and didn’t stick with the traditional blue. We have seen several motherboard that the USB 3.0 header sticks out like a sore thumb on a blacked out (or other theme) motherboard by using the blue header. Between the 24pin power and the SS USB 3.0 header we can find a single 4pin system fan header. The main focus on this corner of the F2A85X-UP4 is the DIMM slots, while much of the board is black, GIGABYTE was smart enough to use two different colored DIMM slots for the two different channels. The GIGABYTE F2A85X-UP4 will support up to 64Gb of 1.5V DDR3 DRAM with support of frequencies up to 1866MHz. 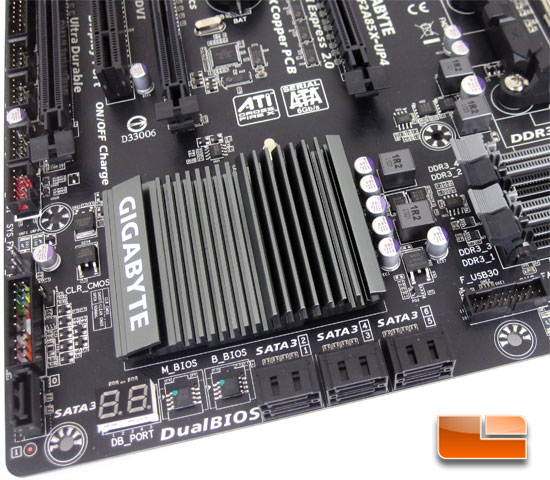 Swinging the GIGABYTE F2A85X-UP4 around, we can see the six SATA III 6Gbps ports, dual soldered on BIOS chips, Debugging LED display, a seventh SATA III 6Gbps port, front panel header, a second 4pin system fan header, and four internal USB 2.0 headers. Just to the inside of the front panel header there is a second point that we can clear the CMOS, this time it is a pair of pins that once jumped will clear the BIOS settings. 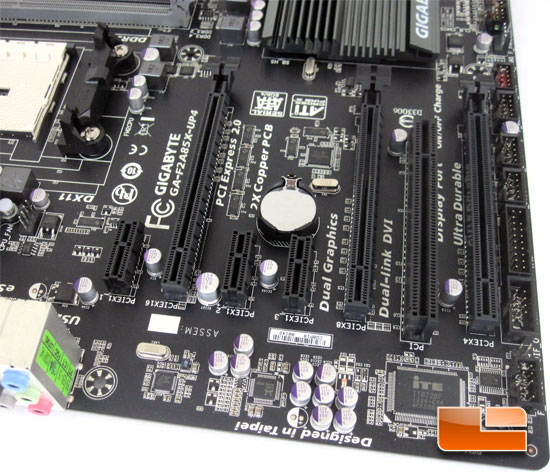 Swinging the GIGABYTE F2A85X-UP4 around once again we can catch a good look at the expansion slots and the integrated controllers. The F2A85X-UP4 is graced with three PCIe x1 slots, three PCIE x16 slots and a single PCI slot. All of the PCIe slots conform to PCIe Gen 2, which isn’t a real issue since most cards can’t even utilize the full bandwidth of PCIe Gen 2 let-alone PCIe Gen 3. Picking up where we left off along the right edge of the board, after the internal USB 2.0 headers, we have the T.P.M. (Trusted Platform Module) header, COM port header, SPDIF out, as well as the front panel audio header. Along the leading edge of the GIGABYTE F2A85X-UP4 we can see the ITE IT8728F Super I/O controller, Realtek ALC892 High Definition Audio Controller, as well as the Realtek RTL8111E Gigabit Ethernet controller. 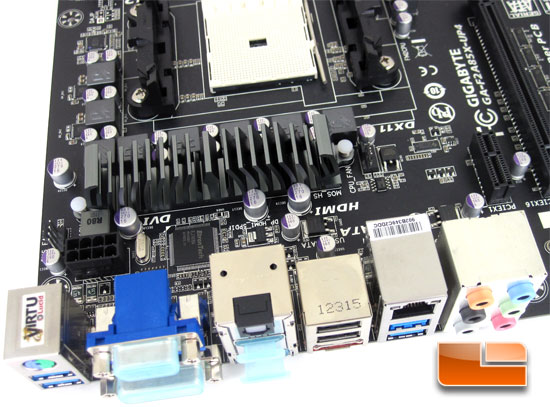 Looking at the final corner of the board, we can see the 8pin CPU power connector, the Etrontech EJ168A SuperSpeed USB 3.0 host controller, this provides the GIGABYTE F2A85X-UP4 with an additional pair of SS USB 3.0 ports on the back panel.

There isn’t much lacking on the I/O panel of the GIGABYTE F2A85X-UP4. There is a grand total of six USB ports, with four of them being SS USB 3.0, an eSATA III port, VGA D-Sub, DVI-D, HDMI, DisplayPort, Gigabit Ethernet (RJ-45 jack), optical SPDIF out, six audio jacks (Center/Sub-woofer Speaker Out/Rear Speaker Out/Side Speaker Out/Line In/Line Out/Microphone), and a single PS/2 port that can be used for either a Keyboard or mouse.